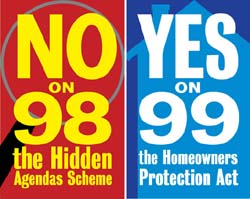 In a poll released yesterday by the Public Policy Institute that interviewed 2,000 likely California voters, Proposition 98 appears headed for defeat. The initiative to abolish rent control is trailing 37-41, which is a fatal place to be two months before an election (when most voters have not tuned in yet.) Proposition 99, which would simply reform eminent domain, is leading by 53-27. Moreover, 53% said that rent control is a “good thing” (including 48% of homeowners), whereas 39% said it’s a “bad thing.”

The big question, however, is turnout. The poll only quizzed “likely voters,” but very few people are expected to vote in June — when California will have no presidential primary or a general election. Besides the Prop 98/99 battle, the only other reason to vote will be for various competitive primaries for the State Legislature. Therefore, the real challenge is to pressure Democrats who are running in these races to make “No on 98” a central part of their platform.