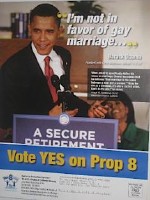 In a move clearly designed to give African-Americans the false impression that Barack Obama supports Proposition 8, the “Yes on 8” campaign sent out a mailer yesterday that prominently featured Obama—along with quotes from four black ministers in California. African-American turnout on Tuesday is expected to hit record highs, and how they vote on Prop 8 could determine the outcome of that election. The Obama-Biden campaign issued a statement that reiterated his stance against Prop 8—but did not request the campaign to cease using his likeness, as Obama did for a U.S. Senate candidate in Georgia. He did, however, allow the “No on 8” campaign to run a TV spot stating his opposition. The “Yes on 8” mailer also included a typo which may not go unnoticed. According to Dr. Phillip Goudeaux, said the mailer, Proposition 8 is vital to promote the “scared” institution of marriage. Because the Prop 8 campaign is based on fear, such a typo can more accurately be described as a Freudian slip.

Conventional wisdom says that African-American voters, although strongly Democratic and supportive of Obama, are culturally conservative. But polls consistently show that how respondents plan to vote in the presidential race is the clearest indicator of how they will vote on Proposition 8—with Obama supporters strongly opposed. And these polls also show the African-American vote to be volatile. The latest Field Poll (which had Prop 8 losing by five points) had black voters narrowly supporting it. But a Survey USA poll had Prop 8 ahead—because African-Americans supported it by a 20-point margin.

So it’s no surprise that the Prop 8 campaign is trying to manipulate the African-American vote—by capitalizing on Obama’s candidacy. Like most dishonest but effective mailers, the piece that hit mailboxes yesterday is not inaccurate—but is intentionally deceptive. It features Obama on the front, with a quote that he’s “not in favor of gay marriage.” But Obama’s personal view on gay marriage does not translate into amending the constitution – as he called Proposition 8 “divisive and discriminatory.” The mailer, however, leaves the quote out of context—hoping that voters will not know that Obama opposes Prop 8.

“It is despicable that the Yes on 8 campaign would send out a last minute mailer to the African American community in a clear attempt to mislead voters about Senator Barack Obama’s position on Proposition 8,” said District Attorney Kamala Harris, who is close to Obama. “The leadership of this campaign should issue an immediate retraction and apology for this transparent attempt to deceive the public.” The Obama campaign also issued a statement reiterating his opposition to Prop 8, and allowed “No on 8” to use his likeness in a commercial for the final stretch.

What Obama hasn’t done, however, is request that the Prop 8 campaign cease using his likeness—which he did in a prior circumstance. Earlier this year, Georgia had a competitive Democratic primary for the U.S. Senate seat between Vernon Jones and Jim Martin. Jones used a photo of Obama in a mailer — and even appropriated the “yes we can” slogan. Because Obama was neutral in the race, he requested Jones to cease using his likeness. Here, Obama is formally against Prop 8 – but has not asked the same from the “Yes on 8” campaign.

The Prop 8 mailer also includes a quote from four black ministers in California—all of whom support amending the Constitution. Dr. Phillip Goudeaux is quoted as saying: “Proposition 8 is vital for anyone who cares about upholding the scared institution of marriage [my emphasis].” No doubt the Prop 8 campaign will argue that this was merely a typo—that they meant to actually say “sacred.” But because Prop 8’s campaign is premised on fear (which promotes hate and intolerance), one can only conclude that this was a Freudian slip on their part. Hopefully, this won’t go unnoticed.