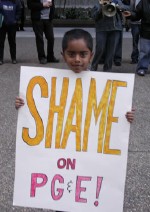 Every election cycle has an awful state ballot proposition, with plenty of corporate funding to fool voters. For the June primary, it’s Prop 16 – a thinly veiled power grab by PG&E to shut down competition to keeps its monopoly. As more California cities consider providing their own energy through Community Choice Aggregation (CCA), PG&E feels threatened that consumers will finally have a choice. Prop 16 would require that local governments get a two-thirds vote of the electorate before entering into CCA agreements – efforts that PG&E will surely throw millions into defeating. Ironically, Prop 16 only needs a bare majority to pass – to mandate a two-thirds threshold before consumers can quit PG&E. And while CCA efforts would then face impossible odds at prevailing, it’s not like PG&E needs two-thirds approval before it becomes your energy provider. Just like health insurance companies fear the “public option” because it would keep them honest, PG&E is bankrolling the Prop 16 campaign to block competition. And with an expected conservative voter turnout in June, Prop 16 could very well pass.

It should be obvious by now that two-thirds majority requirements have ruined the state. Although Democrats have a permanent majority in the state legislature, Republicans call the shots when it comes to passing a budget – just because we are the only state in the nation to require a two-thirds majority for both the budget and taxes. At the local level, cities are being forced to make devastating cuts – because any local tax increase requires (in most cases) a two-thirds vote by the electorate. It’s a tyranny of the minority, and the last thing we need in California to be even more dysfunctional is another such measure.

But PG&E has funded all of the $6.5 million behind Prop 16 so far – and as voters start paying attention to the June ballot propositions, expect them to dwarf this figure in no time. They hope to tap into populist anger in these tough times against politicians, saying that the public should have a “right to vote” before local government goes into the energy business. What they’re really afraid of is fair competition, and their failure to live up to minimum renewable energy goals. It’s about killing Community Choice Aggregation.

What is Community Choice Aggregation? First passed in Massachusetts in the 1990’s, CCA allows local governments to pool the buying power of consumers to secure energy contracts – providing a “public option” from the utility giants that swamp the industry. California passed a law in 2002, letting cities and counties to enter into CCA agreements – and places like San Francisco and Marin County are making progress in that direction. Consumers could opt to stay with PG&E if they want, giving them a competitive choice.

CCA contracts across the country have shown that consumers pay less per kilowatt hour than private investor-owned competitors – and have been better at delivering renewable energy. Which is another reason why PG&E wants to kill it. State law requires utilities to have 20% of their energy from renewable sources by the end of this year. PG&E was lagging behind at 12% in 2008, with Southern California Edison at 15%. Meanwhile, the Marin Energy Authority – a CCA agency – is prepared to hit at least 25% in June.

If Prop 16 passes on June 8th, the Marin Energy Authority would need voter approval for each of its clean energy contract by a two-thirds vote – even though CCA is paid for by ratepayers, and those who don’t want their energy through the public agency can opt out. Prop 16 could also require that municipal utility districts that already exist (in places like Anaheim, Glendale and Burbank) would require a two-thirds vote before entering into contracts with energy providers – a true boondoggle.

Even in liberal San Francisco, you’re lucky to get two-thirds of the electorate to agree on anything. Civic leaders go through pains to secure unanimous support before a tax or bond gets placed on the ballot, which explains why we’ve failed to solve the City budget mess with revenue measures. If a well-funded opponent is ready to throw significant money into its defeat, that’s the kiss of death. PG&E will gladly play that role at every step – in Marin County, they hired Joe Nation to lobby cities to opt out of the Marin Energy Authority.

And there are two reasons why Prop 16 could very well pass. First, PG&E has unlimited funds – and the $6.5 million they’ve already spent is just the first of an avalanche of your ratepayer dollars. Currently, “No on 16” has largely been funded by our friends at TURN – who have only given a few thousand dollars. So the “no” campaign will need money.

Second, there isn’t much of a reason for progressives to turn out in June. Jerry Brown is running unopposed in the Democratic race for Governor, whereas Republicans will have Meg Whitman and Steve Poizner duking it out. In the Senate race, Barbara Boxer has a free ride on the Democratic side – as Carly Fiornia, Tom Campbell and Chuck DeVote vie for the demon sheep vote. Without a draw at the top of the ticket, Prop 16 will have to be the one.

Of course, this was PG&E’s goal all along – put its Monopoly Protection Measure on a ballot with a right-wing electorate. When the Howard Jarvis Taxpayer’s Association wanted to abolish rent control, they waited until June 2008 to put Prop 98 on the ballot. Its President even bragged on video that voter turnout would be “very low and very conservative.”

Thankfully, Prop 98 lost badly – despite a bad ballot for progressives. To defeat Prop 16 in June, we will have to do much of the same kind of work to marginalize PG&E.