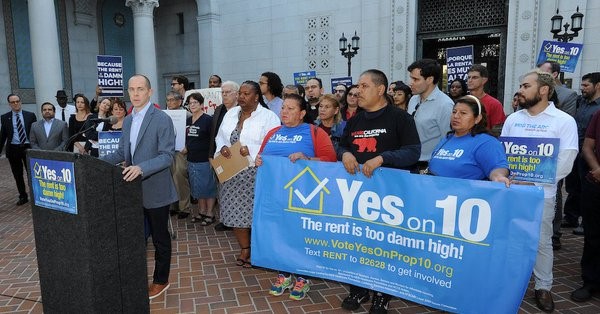 Last week’s poll by the Public Policy Institute of California that had California’s Prop 10 trailing badly (60% say they will vote no) led some to conclude that a big defeat would set back the state’s tenants movement. But Prop 10 has already proved a huge step forward for tenants. In fact, Prop 10 has done more to build local and statewide tenant activism than any other measure since an earlier Prop 10 in 1980 unsuccessfully sought to repeal all rent control laws.

Here’s what Prop 10 has already accomplished:

There has been so much Yes on 10 activism in Los Angeles that one can easily forget that as recently as 2014 San Francisco could not even get Los Angeles officials to make a major push for state Ellis Act reform. For reasons I detail in my new book‘s chapter on Los Angeles’ housing crisis, the city’s tenant movement has historically lacked the success of its allies in nearby Santa Monica or San Francisco.

But Los Angeles is now a hotbed of tenant activism. There’s a reason Mayor Garcetti, the Los Angeles City Council, and even the historically more conservative LA Board of Supervisors all endorsed Prop 10: pressure from the city’s tenants movement made it happen.  Activists have made Prop 10 the linchpin for expanding political support for renters.

Los Angeles’s tenant movement was growing before Prop 10. An influx of young activists associated with the Los Angeles Tenants Union and the Los Angeles chapter of the Democratic Socialists of America (DSA Los Angeles) have brought new energy into renter campaigns.  Both groups have been heavily involved in using confrontational tactics to prevent tenant evictions; Prop 10 gave activists a bigger canvas upon which to make the case for increased tenants’ rights (I will be talking about LA activist successes at stopping evictions and the city’s overall housing crisis at Skylight Books on November 17 at 5pm).

The parallel between the 1980 Prop 10 campaign and the current one is clear: both proved springboards for young activists to prioritize tenants’ issues. That’s why so many pro-tenant laws passed around 1980. Tenant issues have not been the same priority for young activists until the worsening affordability crisis of recent years, and the new Prop 10 has been an incredible recruiting tool and activist training ground.

The power of Los Angeles’ tenant movement is also important for tenants’ statewide legislative power. That power through 2018 has not come close to passing any critical tenant laws, with David Chiu’s AB 2343 lengthening eviction response times likely the biggest win in years.

A strong Los Angeles tenant movement makes the Ellis Act reform bill sponsored in 2014 and 2015 by former San Francisco Mayor Ed Lee and former State Senator Mark Leno ripe for return in 2019. The common sense bill simply prevents speculators from buying an apartment building and then invoking the Ellis Act to “go out of the rental housing business” the very next day.

Yet even a bill that doesn’t even impact real landlords could not overcome a state legislature controlled by Big Real Estate. I wrote after the April 14, 2015 defeat of the second reform effort that “based on Democrats comments who voted against the bill last year and last week, it seems that Sacramento views San Francisco’s housing crisis as San Francisco’s problem.”

But this has changed dramatically today.

As Larry Gross of the Coalition for Economic Survival, in conjunction with the San Francisco-based Anti-Eviction Mapping Project, has documented, Ellis evictions are costing Los Angeles over 5and ½ rent controlled units per day. Nearly 25.000 have been lost since 2001. Ellis reform backers couldn’t get Garcetti and Los Angeles legislators to make Ellis Act reform a priority in 2014 and 2015, but the revitalized Los Angeles tenant movement could get the city’s key officials on board in 2019.

Leno’s successor, Scott Wiener, told me he supports the Ellis reform bill. Incoming Governor Gavin Newsom has said the same. This is significant as neither backed Prop 10. The bill very badly needs a Los Angeles sponsor, and I have to assume this will be a Los Angeles tenant priority after the election.

I have never seen California’s labor movement so unified behind tenants as it has been behind Prop 10. The California Teachers Association (CTA), one of whose former representatives (former State Senator Tony Mendoza) helped kill Ellis Act reform, is all on board for Prop 10. The California Labor Federation, California Nurses Association, and a huge number of county labor councils are also strongly backing Costa-Hawkins repeal (Rusty Hicks, President of the LA Fed, is at the podium in the accompanying Yes on 10 rally photo).

It makes perfect sense for these unions to prioritize tenant issues. As I describe in Generation Priced Out, there is something very wrong when progressive cities price out unionized teachers, nurses, firefighters, hotel workers, janitors and others. What workers win at the bargaining table they give back either in the form of high rents or in high transit costs associated with their having to live far from their workplace.

Labor has its own Sacramento agenda but getting behind Ellis Act reform in 2019 should be on it. Labor has been central in winning Sacramento support for money for new affordable housing, and strengthening tenant protections is just as critical.

Landlords could never have won the Costa-Hawkins Act through a state ballot measure. If they could have, they would have tried.

Instead, they got the Act passed in a rare political moment in 1995 when Republicans controlled the State Assembly (yes, that is how different California was politically when Costa-Hawkins passed).  And despite the Act having failed to accomplish any of its stated goals—it did not lower rents, stimulate new housing development, or do anything but raise profits for landlords—-repealing such a complex measure via a state ballot measure was always a very uphill climb.

Adding to that climb was something I have come across constantly since Prop 10 qualified for the ballot: most voters did not know what the Costa-Hawkins Act does. Landlords have already spent $70 million to spread lies about Prop 10, and these falsehoods are more easily accepted given widespread lack of knowledge of the truth about Costa-Hawkins.

Among the falsehoods floated by some who should know better is the idea that Prop 10 was not needed because a negotiated compromise could have been reached in Sacramento. That nonsense will be disposed of next year when legislators try again to pass a “compromise” version of Costa-Hawkins—-it will get nowhere.

I don’t know if any ballot measure could overcome an opposition campaign that could reach $100 million by Election Day. But those believing that the outcome of a $100 million campaign of falsehoods (most targeted at homeowners alleged financial losses from Prop 10) reflects statewide opposition to stronger rent controls are in for a rude surprise.

Yes on 10 has run a remarkably people-powered campaign for greater economic justice against billionaires who are spending a small portion of their vast fortunes to keep California unaffordable. That is the unalterable fact that Prop 10 has exposed. This acute economic unfairness should prove the foundation for legislative efforts in 2019 and a return to the ballot with another tenant-related measure in 2020.