Progressives Have No Reason for Pessimism 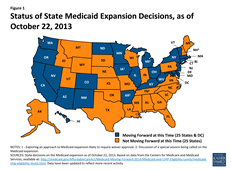 Despite strong progressive gains in the low-turnout, off year November election and the breaking of the Senate filibuster, many progressives are feeling down. They see the Obamacare website snafu as akin to the failure of health care reform, and believe it has jeopardized support for future new government programs. Pessimistic progressives also fear the website difficulties will cause huge Democratic losses in the 2014 midterm elections.

But those mired in pessimism forget that the fundamentals that have boosted progressives in recent years have not changed. This includes public anger over rising inequality, GOP opposition to increased public investment in education and infrastructure, and the refusal of House Republicans to vote on immigration reform. A new poll found 63% supporting a path to citizenship blocked by the GOP, a number that would have progressives fearing the sky was falling if their stance on one of their core issues was so unpopular. I think the real message of the Obamacare website delay is that in the age of the Internet and social media, the traditional media still has the capacity to create and sustain a false political narrative—and to get progressives to believe it.

Since the Internet empowered online sources to challenge and refute the traditional media’s promotion of conservative political narratives, national elections have not been the same. When John McCain in 2008 or Mitt Romney in 2012 made false claims about Barack Obama, the traditional media’s broadcasting of these falsehoods were quickly shot down by online sources and/or social media.

But the traditional media’s anti-reform coverage of the Obamacare website snafu has overcome even the most valiant online efforts to set the record straight. It’s not that progressive online media has not done a great job; to the contrary, online sources have demonstrated the hypocrisy of now hysterical Republicans downplaying initial problems in George W. Bush’s Medicare rollout, and highlighted the media’s providing ten times more stories on the website failure as it has on historically low national health care spending since Obamacare’s passage (a brilliant media takedown by Think Progress).

There is a difference, however, in how the traditional media covers a story and political reality. And this reality says that the GOP failed to gain in a November election cycle when the website was the top national story, and that a delayed website says nothing about the political implications of Obamacare.

To be clear, progressives are understandably outraged by GOP cuts to food stamps, and by the five million people (disproportionately African-Americans) who won’t be covered under Obamacare because GOP governors denied their states expansion of Medicaid (see map of those denied). I could name a hundred more problems worthy of outrage and anger, but that’s different from feeling pessimism and gloom over the media’s website narrative.

As we enter the holiday season, gloomy progressives should remember that the fundamental rules of politics still apply. And these rules show no shift to Republicans on the key issues that have decided recent national elections. In fact, there is greater support for the progressive position on immigration reform, marriage equality, and for efforts to address climate change than there was on Presidential Election Day 2004, 2008 or 2012.

And for progressives pessimistic over a potential low turnout 2014 election handing the Senate to the GOP, it’s not infrequent voters who are angry over the Obamacare website, it’s the Tea Party base. The voters who will really be motivated in 2014 are Latinos and their non-Latino friends and family who will respond to the House GOP denial of a vote for immigration reform by going to the polls in record numbers.

It’s Republicans who should be gloomy about their failure to rebrand the GOP after its 2012 failure. Progressives should be angry and outraged, but also convinced that the public is behind them.

This critical fact should make even the Chicken Little wing of the left feeling positive thoughts this holiday season.