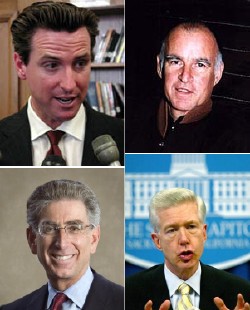 As California faces a fiscal meltdown, Democrats blame Republicans for opposing essential tax hikes. But progressives own failures should not be ignored. California Republicans have been anti-tax zealots since the mid-1990’s, yet progressives failed to prioritize passing a ballot measure eliminating the 2/3 requirement for budget passage in 1998, 2000, 2004, or 2008, each of which offered a great chance for success. Progressives have allowed conservatives to put them on the defensive in the state initiative process, and have not mobilized on behalf of a politically viable progressive Governor candidate since Jerry Brown in 1974. And, if Brown and Gavin Newsom are the only major Democratic candidates in 2010, this pattern will be repeated. California progressives launched MoveOn.org, created the electoral model for Latino political empowerment, traveled to other states for Kerry and Obama, and contribute massive amounts of money to progressive causes and candidates across the nation — but when it comes to preventing conservatives from destroying our state, we have dropped the ball.

Clearly, Arnold Schwarzenegger and the Republican Party deserve overwhelming blame for the state’s budget crisis. Both led the recall of Gray Davis over the hike in the vehicular license fee, eliminating a revenue source that, if kept intact, would have virtually eliminated the state’s entire budget deficit. But progressives have long understood the Governor and Republican Party’s game, yet failed to implement strategies to overcome it.

If you want to capture the sad state of progressive political strategizing/mobilizing in California, consider that the Democratic candidates for Governor since 1982 have been Tom Bradley (twice), Dianne Feinstein, Kathleen Brown (Jerry’s sister), Gray Davis (twice, plus the recall election), and Phil Angelides.

None of these candidates galvanized the progressive base, or emerged from the Party’s liberal wing. In fact, California Democrats have consistently nominated people to lead the party who lack charisma, the common touch, or any of the attributes that Barack Obama displays on a daily basis.

And now it looks like Democrats will choose between Gavin Newsom and Jerry Brown (Antonio Villaraigosa is rumored to not be running). The two California politicians who have shown the least interest in working with legislative colleagues, and who spent the least time in small meetings with constituents, will be progressives’ default choice.

We can’t blame Republicans for that.

Nor can we blame Democratic moderates, as progressives dominate the Party’s primaries.

Nor can we blame a lack of money. MoveOn, the Obama campaign, Act Blue and a host of other sites demonstrate that California progressives can raise millions of dollars online.

So what’s the problem?

What have these groups done to select charismatic, progressive candidates in Governor’s races?

California’s leading progressive groups have done nothing to recruit and back progressive candidates for Governor. Progressives did not even back a grassroots challenger to moderates Gray Davis in 1998 or Kathleen Brown in 1994 when the chances for a Democrat to prevail looked exceedingly strong when the year began.

Newsom and Brown: More of the Same

I must have missed the grassroots progressive convention that anointed Gavin Newsom and Jerry Brown the Democrats’ only major Governor candidates for 2010, but with Los Angeles Mayor Antonio Villaraigosa likely out of the race, that’s our field. The two have much in common.

Both are closely aligned with powerful real estate interests, and have proved hostile to legislation expanding tenants rights.

Brown staunchly opposed just cause eviction laws as Oakland’s mayor, and even vetoed a mild inclusionary housing law. He gave a blank check to real estate and development interests during his tenure in Oakland.

Newsom has backed landlords throughout his political career, and recently received a $25,000 contribution from Republican Thomas J. Coates of San Francisco’s
Jackson Square Properties. Coates spent almost $1 million on last June’s Proposition 98, the measure that sought to eliminate rent control in California. While Newsom publicly opposed Prop 98, Coates did not donate $25,000 because he thought that a Governor Newsom would sign bills restricting the Ellis Act and expanding tenants rights.

Brown and Newsom both ignore legislative bodies other politicians, ensuring poor communication and a lack of cooperation with state Democratic leaders. Democrats who complained that Gray Davis did not build relationships with legislators will find Newsom or Brown offering more of the same.

These are the leaders that California’s progressive community has allowed Democratic voters to choose from next June.

Conservatives responded to their lack of electoral success in California by placing initiatives on virtually every ballot. When they lose, as in parental notification for abortion, they come back again and again.

What do California progressives do? We complain about conservative measures while avoiding the grassroots mobilizing to get our own to qualify and potentially effect major change.

Do we not believe voters agree with us? Or is it the cost of qualifying initiatives through paid signature gatherers? Or do our labor, environmental and women’s constituencies prefer funding politicians rather than ballot measures that could accomplish what elected officials have not?

I heard from one politician who bemoaned that collecting one million signatures for a state measure cost upwards of $3 million. I told him that I discuss in my book, Beyond the Fields, how the UFW gathered 720,000 signatures to qualify a measure in 1976 in only 29 days and with no paid gatherers!

Are today’s activists less dedicated than those of 1976? The Obama campaign sure says otherwise. Rather, it’s that progressives lack the leadership to inspire tens of thousands of people to hit the streets to collect signatures — despite the fact that the state’s entire public sector is on life support.

It’s a tragedy. And until progressives start taking charge, the situation will only get worse.