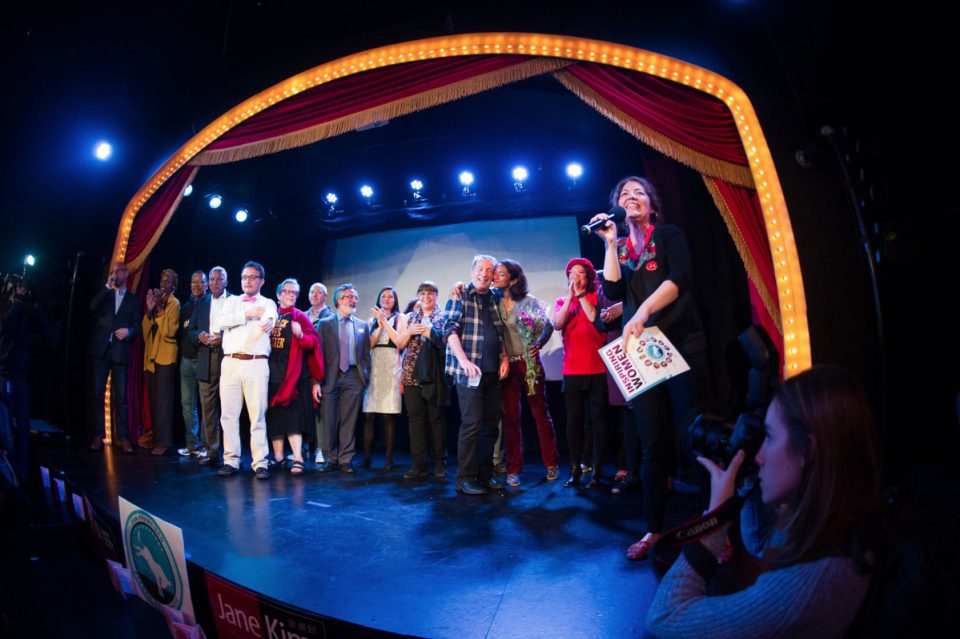 The votes are still not all counted but the progressive “Reform” slate and its allies have won control of the San Francisco Democratic Party (SFDCCC).  This impacts the November supervisor and state senate races, along with local ballot initiatives.

In The Activist’s Handbook I describe how in 1992 we tied our ballot measure to cut annual rent increases by more than half to the Democratic Presidential Clinton-Gore campaign and associated our realtor opponents with Republican George Bush; it became the first tenant ballot measure to ever win in San Francisco (we created the link by highlighting that the SF Republican Party opposed our measure while the SFDCCC backed it).

The perceived power of the SFDCCC’s November endorsement is why so much money and volunteer time was spent in the battle between two competing slates. Here’s how the progressive majority’s endorsements are likely to impact key races.

I saw School Board member Sandra Lee Fewer as already having an edge due to her greater name recognition and prior election to the School Board. Fewer was elected to the SFDCCC while her chief opponent, Marjan Philhour, was not. Fewer is certain to get the SFDCCC endorsement, increasing her chances for victory in November.

The Reform slate’s victory would seem to be good news for progressive Dean Preston, who is challenging London Breed. But progressive stalwart John Burton endorsed Breed last week, and neither Supervisors Kim nor Peskin (both elected to the DCCC) have endorsed a candidate in the race. As a result, tenant advocate Preston could  lose the endorsement to Breed (who won election to the SFDCCC) or get  a non-endorsement instead of securing the Democratic Party backing his underdog campaign seeks.

Hillary Ronen is a lock to get the SFDCCC endorsement. Her chief opponent, Josh Arce, lost his race to get on the body and now faces an even tougher challenge.

This is a race where a SFDCCC endorsement can help make up for a lack of name recognition. Arce, Ronen,  Philhour, Preston and others who have not previously won elective office are not well known in their district.  In fact,  many voters do not even know who their current supervisor is or can identify them when their name is provided.

I first learned this in 2003 when some of us were trying to convince Aaron Peskin to run for mayor. He agreed to do a poll to test his support.  The poll found that most of the city had never even heard of  Peskin (who at that time had only run a district supervisor race) despite his being a mainstay in Matier & Ross columns in those days.

This name recognition effect was in full force in the recent SFDCCC races. All current and former supervisors won, and only a handful who had never served in elected office or on a city commission did.

In a Ronen-Arce race where neither candidate has much name recognition, Ronen’s SFDCCC endorsement is huge.

Unlike the other districts, none of the leading candidates for District Eleven ( Kim Alvarenga and Asha Safai) ran for the SFDCCC. While Alvarenga is often seen as the progressive choice, Safai could have enough progressive support on the SFDCCC to prevent any endorsement.

The California Democratic Party has already endorsed Wiener in this State Senate race and it is binding on the SFDCCC. But don’t expect the Democratic Party slate card next fall to prominently highlight this endorsement (the Party cards historically highlight some measures while listing all).

Kim’s proposed tax increase on real estate transfers of property sold for over $5 million to fund free City College tuition is an example of the impact of the progressive control of the SFDCCC. I doubt the measure would have been backed by the outgoing body, while it now will be endorsed. This measure would be hard to defeat with or without a Democratic Party endorsement, but this backing increases its chances of victory.

David Campos’ measure to create a Public Advocate position is also one that would have previously been opposed by the SFDCCC and now will be endorsed. I don’t see this winning even with the Democratic Party endorsement. If it does win, Campos may find himself in a race for Public Advocate against the loser of Kim-Wiener, or another termed out supervisor.

I assume the soda tax measure gets the SFDCCC endorsement without much of a fight.

Candidates who do not get the SFDCCC endorsement should not give up hope. The SFDCCC spent over $200,000 and the San Francisco Bay Guardian waged an all-out campaign to elect Debra Walker District Six supervisor in 2010, and she lost to Jane Kim by 9%.