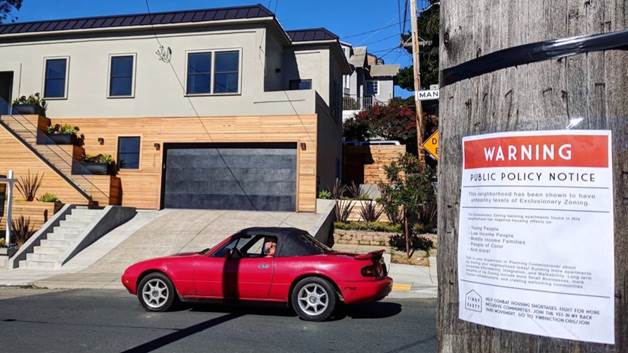 Exclusionary Zoning At Stake in November

San Francisco’s “moderate” vs. “progressive” and “establishment” vs. “outsider” supervisor races are now primarily about political alliances.  The biggest issue separating candidates is their approach to the city’s housing crisis, and whether they support ending the exclusionary zoning laws that ban new apartments in roughly 63% of the city.

In District 4, the city’s political establishment is split between moderate Jessica Ho and progressive Gordon Mar. Yet housing advocates are chiefly lined up behind Trevor McNeil, who has a much more ambitious agenda for building housing in the district.

In District 6, Matt Haney has the overwhelming number of endorsements. His backers see him as challenging those who have been “calling the shots for years.” But those “calling the shots” have also maintained exclusionary zoning. In contrast, Sonja Trauss, running in tandem with Christine Johnson, offers a housing agenda which openly challenges longstanding exclusionary land use policies citywide.

In District 10, housing advocates see Theo Ellington as a huge supporter of building more housing. The Bay City Beacon did a podcast with Ellington where he shared his pro-housing agenda.

Support for ending apartment bans blurs political lines because progressives  who would be expected to oppose such elitist policies have instead long aligned with anti-apartment homeowner groups (See my recent San Francisco Chronicle piece, “Bay Area far from progressive on housing”). Yet the good news is that this is the first election cycle in San Francisco where the city’s widespread ban on new rental housing has become an issue; progress is being made.

So given that using land for mansions rather than cheaper multi-unit housing does not serve San Francisco’s policy goals, why does the city ban new apartments in most neighborhoods? Who are the “powers that be” that have perpetuated such exclusionary and elitist policies?

Is this the fault of Ron Conway, the San Francisco left’s favorite villain? I don’t recall Conway ever being involved in a zoning battle or trying to stop apartments from being built.

Is it the ever powerful Willie Brown? He’d be a strange suspect in looking for someone who has prevented new housing development.

I hear a lot of development folks blaming Aaron Peskin, who has been in power in San Francisco almost continuously since 2001. They cite his anti-housing Planning Commission appointees and promotion of homeowner appeal rights for hindering new construction. But Peskin has never had chief power over city land use policy. He is also a close ally of the Residential Builders Association, which opposes exclusionary policies.

When it comes down to it I cannot think of a single major political figure in San Francisco primarily identified with promoting exclusionary zoning. Yet it is the city’s dominant land use policy, in contradiction to stated policies favoring diversity, inclusion and tenants.

How did this happen? Because longtime homeowners want it this way. And their disproportionate voting power has raised their own property values and quality of life at the expense of new generations of the non-wealthy

A Path to Justice

San Francisco’s elitist and exclusionary housing policies survive because politicians choose to look the other way. In addition, some progressives see opposing apartments on the Westside as a way to broaden their political base (though Jane Kim’s alignment with anti-rental housing homeowners during her recent mayoral campaign did not help her much with voters. The Westside instead backed the pro-housing London Breed).

A longtime westside neighborhood activist responded to my San Francisco Chronicle piece by disputing that new apartments could not be built in her neighborhood. I suppose denial is one way for people to justify barring new tenants from their neighborhood. But 37% of the city’s private land is zoned for only one unit per lot, and a majority of residential land in San Francisco (many estimate 63%) is zoned for a maximum of either one or two units.

Some see large apartment buildings in their neighborhood and do not realize they could not be built today. That’s why Portland activists have come up with the term “re-legalize” apartments to explain why cities need to resume building the multi-unit dwellings as they did in the pre-exclusionary zoning era.  This is why State Senator Scott Wiener, Assembly members David Chiu and Phil Ting, and Supervisor Katy Tang have all backed a “Domiciles in the City” plan that could turn the Sunset into the next Paris, lending weight to the re-legalization campaign.

If San Francisco wants to enable apartments to be built citywide, it has two options.

First, it can elect a Board majority and mayor who supports this agenda. 2018 is the first supervisor election cycle ever where potentially winning candidates have made this a front-burner issue.

Second, if the Board refuses to act voters can legalize apartments through the initiative process.

Does San Francisco want fourplexes built on vacant land or mansions? I think most voters favor the former. And if a Board of Supervisors majority does not emerge from this election in favor of legalizing new apartments, I think the voters will directly address the issue.

Randy Shaw is Editor of  Beyond Chron. Pick up his new book on expanding housing for working people in cities, Generation Priced Out: Who Gets to Live in the New Urban America (UC Press, 2018).