Primary Season Will Go On Forever Unless Reporters Do Math 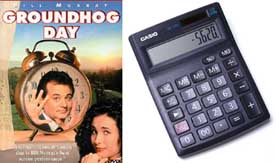 Everyone wants the Democratic presidential nomination to end, but the media momentum myth that has kept Hillary Clinton alive makes the movie “Groundhog Day” look benign. Here’s what we’ve seen at least three times so far: Clinton wins a primary that cuts off Barack Obama’s winning streak – and regardless of the raw delegate count that she needs to get nominated, gets legitimized as a “comeback.” We saw this most recently in Ohio and Texas, but it also happened after New Hampshire, Nevada and Super Tuesday – only to later realize that she did not make the gains that the media exclaimed. Obama won the Wyoming caucus on Saturday, and is expected to win Mississippi tonight – paving the way for another Clinton “comeback” in Pennsylvania. But Obama should win most of the subsequent primaries, making the whole myth of a “tight race” slightly exasperating and dishonest. Unlike Mike Huckabee, Clinton does not get ridiculed for believing in miracles – rather than math.

The front page of the March 4th San Francisco Chronicle (“Momentum vs. Mathematics”) pretty much summed up the Clinton campaign strategy, and how she’s gotten away with a media narrative that has driven the primary season. In what is ultimately a race for delegates to the National Convention, how does an abstract concept like “momentum” trump basic arithmetic? While George Bush denounces his skeptics as living in the “reality-based community,” Clinton seems to think she can hoodwink Democrats into thinking there may be a chance that she’ll be the next presidential nominee.

But her bluster does not live up to scrutiny …

After Clinton ended Obama’s 11-state winning streak on March 4th, the media spun it as a sudden burst of “momentum” that would re-ignite the nomination fight. Never mind that the delegate count proved it was closer than the media coverage implied. After the votes were tabulated, Clinton only scored a net gain of four delegates last week – in a race where she’s still behind by 160 delegates.

Add the fact that Los Angeles County finally counted the phantom ballots from undeclared voters, and Obama picked up eight more California delegates – erasing all the gains that Clinton has made. “I know math is hard and everything,” said Calitics blogger David Dayen on the delegate count, “but get out your calculators, people.”

When Republican Mike Huckabee had no chance of catching up to John McCain in the delegate count for their party’s presidential nomination, he said that he “didn’t major in math” – but instead “miracles.” But Hillary Clinton continues to get away with the notion that a media “momentum” that perceives her advantage can trump the delegate count – and the press has not ridiculed her like they did to Huckabee.

Maybe because they keep screwing it up time and again …

Clinton’s New Hampshire victory was unexpected, and it gave her the momentum to keep the race going on to other states. But at the end of the day, she eked out a 2-point victory and tied Obama among delegates. Likewise, Clinton won the popular vote in Nevada – but finished with one less delegate, which means by any objective analysis that Obama won. Still, both results were spun as her victory – and evidence that she was making a comeback.

Obama’s South Carolina victory was so overwhelming that the media could not ignore it, and he picked up “momentum.” But along came Super Tuesday on February 5th, where the media’s bi-coastal bias gave Clinton huge play with her narrow victories in the blue states, while ignoring that Obama won the day. By racking up big victories in smaller states, Obama trumped Clinton by winning the delegate count – but again, the media was slow to realize it.

After winning lopsided margins in every state between February 5th and March 4th, the media once again shifted the “momentum” back to Obama. But the real story behind these victories from Virginia to Wisconsin to Washington was the big edge in delegates that he picked up over Clinton. By the time Clinton won Ohio and Rhode Island – Obama won Texas because his 12-point win in the caucus erased her narrow victory in the primary – her victories in states that favored her were clearly too little, too late.

Now that Obama has won Wyoming – and will likely win Mississippi – we’re seeing the pendulum shift back once again. But the Clinton campaign wants us to focus strictly on Pennsylvania – where the state’s working-class population mirrors Ohio and she’s likely to scare voters and fool them about NAFTA once again. However, winning that state can’t give her “momentum” she needs to win the nomination – because in the reality-based community, math prevails.

Let’s look at the numbers. Obama currently has 1,396 delegates to Clinton’s 1,232 – after counting last week’s results and shifting those eight California delegates from L.A. County. It does not count today’s Mississippi primary. Pennsylvania has 158 pledged delegates. If we generously assume that Clinton wins the Keystone State by a 20-point margin, she would get 95 delegates and Obama 63. That would still put her behind by 132 delegates.

After Pennsylvania, we have primaries in Guam, Indiana, North Carolina, West Virginia, Kentucky, Oregon, Puerto Rico, Montana and South Dakota. A majority of these states – including the largest one (North Carolina) – favor Obama, so expect him to pick up most of the delegates that he lost in Pennsylvania. But again, the media will spin Pennsylvania as once again giving Clinton “momentum” to be the presidential nominee.

Several weeks ago, a Clinton aide suggested that the campaign would not just target “super-delegates” to steal the nomination from Obama – but that they would go after pledged delegates who were directly elected by the voters to pick Obama at the Convention. The Clinton camp denied such rumors after the story was published – because it was so incredulous as to defy all common decency.

But this past weekend, Clinton herself revisited that idea. “Even elected and caucus delegates are not required to stay with whomever they are pledged to,” she told a Newsweek reporter. What does this mean? Despite all the bluster about “media momentum” and winning “big states,” the Clinton camp quietly knows that the math doesn’t add up – and they cannot win the nomination without stealing it.

If only the press would catch on by pulling out their calculators.

CORRECTION: After this piece was first published, I was made aware that the 8-delegate shift in California had nothing to do with the 40,000 crossover ballots added to the count in Los Angeles County. It had to do with counting an additional 800,000 votes across the state. BeyondChron regrets that error.

EDITOR’S NOTE: In his spare time and outside of regular work hours, Paul Hogarth volunteered on Obama’s field operation in San Francisco.