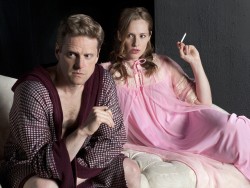 From the 50’s to the present three characters – Philip, Oliver and Sylvia takes us on an interesting cat and mouse trip with a theme of homosexuality, straights and strained relationships. Almost like a Chess Game the actors seamlessly transit from one era to another. This of course, can be a little confusing – especially when one Actor (Michael Cassidy) plays both a straight man and a Gay man. There are surprising bursts of social commentary – no mistake about it – “Pride” is tightly paced and an ongoing puzzle that makes the sharp jabs of humor along the way a very unusual puzzle. Cassidy’s acting is exhilarating.

Alexi Kaye Campbell has given us a smartly written story that is enhanced by the director, Arturo Catricala. Campbell’s Acid words of wisdom are a terse treat. The performances of the entire cast are compelling. Productions values are tight, and exciting. There is Zephyr like costume changes that keep us constantly wondering – ‘what is going to happen next?’

Maura Halloran, who plays Sylvia, also plays a dual role. She is utterly convincing in both roles. The language in this play is pretty spicy. Here are a couple of samples: – “You have to quit sucking the dicks of strange men!” Here’s another: “There’s more to life than tits and ass!” Some may disagree with that.

Do things really change from one generation to another? Maybe. But, not that much. There will always be Love, breaking up, Cheating and lust. And that’s what makes the world go round.

Snazzy Direction by: Årturo Caticala is splendid! He turned the everyday into ‘Extraordinary.’ Joseph Salazar plays Oliver, who is either a Tramp or just over-sexed. – “Stunning performance.” Shane Fahy plays three different men. You try that sometime – see how that works for you. Not easy, I’m sure. Fahy’s talent cup is running over.

This play is a sexual meltdown that explains the unexplainable.
I found it to be daring, devastating and a funny firestorm. Now Playing at the New Conservatory Theatre.

FIVE GREAT REASONS TO FALL IN LOVE WITH KIM NALLEY

She’s as dramatic as La Boheme … She’s Carmen … She’s remarkable … She’s exhilarating and she’s a Cultural touchstone! AND…SHE SANG THE STIRRING “Mississippi Goddamn!” – and when she sings it – she means it. Also loved “Black is the Color of My True Love’s Hair” – Nalley sang many “Bite your Ass” songs during the evening – but since you will see a different show each night, I won’t mention them all, because you may not hear the same songs that I heard. Different set each night keeps the show fresh for everyone. And that’s the way I like it.

There are songs that seem dark and sad. And then there are the songs that express great love and joy. When you listen to Kim Nalley singing the music of Nina Simone – you’re not only listening, but also are mesmerized. Yes, Nalley may be using ‘witchcraft’ on us. She is simply unlike any artist that I’ve ever heard.

Nalley is at the Rrazz Room for several weeks. She tells the audience: be sure and come back because each night will be a different show with different songs. I looked at the “Set List of songs” and there were over 45 listed. Nalley picks and chooses what she wants to sing each evening. Most of her pieces are from different eras. Most songs that I heard were good blues. Nalley shares the stage with the Band and the Piano Player. They are wonderfully versatile. They are: Tammy Hall, piano – Greg Skaff, guitar – Kent Bryson, drums, Michael Zisman, bass. You can’t get anymore fantastic than them.

This was an evening stacked with exciting music. If you don’t know Nina Simone – then this is the best way to learn about her and her fantastic range of styles. It’s sultry and impeccable
Music that comes straight — from the soul. And the Soul in this case is Kim Nalley, with a voice that is truly out of the ordinary range. And yes, she is sexy too.

AT THE RRAZZ ROOM – http://www.therrazzroom.com/

Michael Phillis (What is he hiding?) and Sarah Moore. Photo: Lois Tema.

WISH YOU WERE HERE: SARA MOORE AND MICHAEL PHILLIS ‘SIZZLE’!

THIS IS A SPECIAL PRIDE MONTH EVENT COMEDY PASTICHE BASED ON “I Dream of Jeanie” (The T.V. Show). But you will find this to be more outrageous and definitely more fun.

Phillis the Genie, is wickedly hilarious. The Master tries to dodge snapdragon Genie bitch remarks to everything that Phillis throws at him. He’s stuck with her – she ain’t going anywhere. Sara Moore is the Genie from Hell. She’s not an asset – she’s out to take your life over and she is driving Michael Phillis nuts.

Phillis is one of the most, congenial actors around. He is totally amazing – and he does have that history of showing off his bod. So, you do get to see a little flesh here and there. All, of course, very tasteful.

The bickering between the Master (Phillis) and Moore (The Genie) reaches peaks of a high-energy party. This little comedy has it all. It’s like a dry cocktail that you never get to drink – because the Genie will make it disappear, just when you want it the most. Moore wears her Master down with her lightly concealed ambition to control everyone and everything. She’s like a striving starlet who wants to be the star.

They sing a little, they dance a little and if the Genie gets a chance she will pull the rug from under your feet – just in fun. Or, so she thinks so.

There is magic to be held in this show – as the two stars Michael Phillis is outstanding as usual and Sarah Moore is Divine. I think you’re gonna like it.

THE DIRECTOR ANDREW NANCE is one of the most gifted directors of today. The Magical script is by Michael Phillis.