Posters Show the Labor Movement At its Best 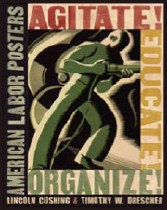 When I receive a book for review, I quickly skim through it before putting it aside for future reading. But when I got Lincoln Cushing & Timothy W. Drescher’s, Agitate! Educate! Organize! American Labor Posters, I became so engrossed in its collection of historic labor posters that I could not put it down. Many readers will have this problem; the work includes so many visually striking and powerful images that one cannot stop searching through the pages for the next poster. But the book offers more than the best collection of labor posters yet produced. It forces readers to think about the values that inspired these posters, and that produced the movements from which these art works emerged. One could understandably wonder why the causes and unions trumpeted in the posters were not more successful, and why the integration of cultural work and labor unions — so prominent in the Industrial Workers of the World, the United Auto Workers, SEIU Local 1199 and the United Farmworkers of America (UFW) — remains the exception and not the rule.

I’ve read my share of books of social movement posters, but Cushing & Drescher’s, Agitate! Educate! Organize!, is in a class by itself. Its over 250 posters even includes such rarities as Big Bill Haywood and the Western Federation of Miners’ 1906 poster that used an American flag to protest the U.S. government’s massive violation of union rights in Colorado — a sorry chapter in the nation’s history that became the subject of J. Anthony Lukas’ classic book, The Big Trouble.

The authors were able to produce such finds because Lincoln Cushing received a grant in 2003 to build a database of American labor artwork. He then surveyed libraries, unions and archives and anywhere else posters might be found to come up with a database of nearly 1000 digitized and catalogued images. Readers now get the benefit of his best pickings.

While a few of the posters have been widely seen — such as Ester Hernandez’s iconic “Sun Mad Raisins” takeoff on the Sun Maid Raisin Girl, Ricardo Levins-Morales’ “The labor movement! The folks that brought you…,” and various Images of Labor created by Jacob Lawrence and Milton Glaser — the vast majority are likely new even for veteran activists.

Cushing and Drescher harken us back to an era when posters and graphic arts were intrinsic, rather than external, to union struggles. This integration of culture was at its strongest in the 1930’s and 1940’s, but began to ebb as “business unionism” became dominant. Both the New York City-based SEIU Local 1199 with its “Bread and Roses” program and the UFW in the 1960’s and 1970’s then rejuvenated the use of art, theater and music to support labor struggles. As I point out in my book, Beyond the Fields, the UFW inspired striking graphics that ultimately reshaped Chicano political art, and many posters supporting the farmworkers movement appear in these pages.

But either due to a preference for television advertising or a sense that posters are too “radical” a format, most mainstream labor unions have not been in the vanguard of political posters for decades. The authors display a psychedelic “One Vote Counts, Your Vote Counts” poster produced by the AFL-CIO in 1968, also noting that the AFL-CIO strongly backed the Vietnam War and its President, George Meany, despised the new left activists identified with the counter-culture. Artists and activists outside unions created most of the striking labor posters after the early 1960’s, with SEIU’s Justice for Janitors a notable exception.

Based on the posters, a person knowing nothing about the U.S. labor movement would conclude that it was much stronger prior to 1950. And, with some exceptions, they would be correct.

The Power of Posters

Although this book is not an analysis of the effectiveness of labor posters in building popular support, it does raise important questions about how unions and their corporate and political adversaries have used images to frame their agendas.

The pre-1950 union posters, as embodied by J.V. Hudak’s “Labor: The Backbone of America” for the AFL in 1948, often show a muscular, powerful labor movement that represents the heart of what’s best about the nation. Other posters of the era identify buying union made goods with “backing a winning team,” and with essential to keep the nation’s economic wheel turning.

In contrast, the post-1960 posters are far less universal and more cause specific. They focus on particular strikes, protests and rallies, and are less likely to identify unions as benefiting the broader economy, or representing core American values.

Part of this shift is attributable to the declining ranks of unionized workers. The 1960’s era protest movements also revealed the hollowness behind the Frank Capra vision of America that labor unions once projected, leaving labor activists less willing to promote the virtues of capitalism. There are other reasons for this shift, but its clear from the posters how “what was good for the labor movement was good for America, “ was replaced by the 1950’s adage of “What’s good for General Motors is good for America.”

At least General Motors was highly unionized. But by the Reagan era corporate profits fully replaced union membership as the symbol of the nation’s core values, and the muscular, powerful images became identified with Microsoft and Goldman Sachs, with Wal-Mart and Starbucks. The once clear link in the public mind between union membership/union made goods and the broader had weakened, if not severed.

Corporate America used television, radio and print advertising to overcome labor’s advantage in the poster wars, and to this day the labor movement has not caught up. Outside of SEIU, labor has been slow to use the Internet and modern communication devices to improve its branding and spread its message.

This is why Agitate! Educate! Organize! is as valuable for the roadmap it offers for labor’s future as it is a treasure-trove of labor’s past. Any labor activist reading through this book has to ask how unions lost their marketing advantage over corporate America — and by seeing how prior generations used posters to build broad support for economic justice, today’s activists’ can initiate innovative strategies to regain it.

Randy Shaw is the Editor of Beyond Chron. He discusses the power of UFW cultural works in his book Beyond the Fields: Cesar Chavez, the UFW and the Struggle for Justice in the 21st Century (University of California Press)