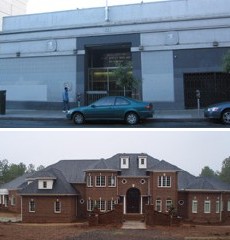 After a long campaign by Tenderloin residents to turn the shabby P.O. Box facility at 101 Hyde Street into a full-service post office, the U.S. Postal Service is reneging its pledge to the community – citing fiscal woes. It’s the same excuse we got in December, when the Post Office said they would stop delivering to new mailboxes in residential hotels – despite state and local laws requiring SRO’s to install them. SF City Attorney Dennis Herrera is planning to sue the Postal Service, in part because their action frustrates the City’s ability to enforce its own laws. But at the same time, CNN reports that the Postal Service has a program where it buys the homes of executives who get relocated – while assuming the risk it will be sold at a loss (if at all.) In South Carolina, the Postal Service paid $1.2 million for the 8,400 square foot home of an executive who relocated to Texas – and the house has yet to find a buyer. Now the Post Office says they will “modify” this practice – capping their home purchases at one million dollars. But such an expense is more than even the marginal cost of giving the Tenderloin a real post office.

Last May, the Postal Service sent out a press release trumpeting its plans to expand its bare-bones facility at 101 Hyde Street. “The community asked us to consider upgrading the Civic Center Post Office to a ‘full-fledged’ retail center,” said district manager Winifred Groux, “and we listened.” Of course, it was never that simple. The Post Office initially wanted it shut down, but residents collected 1,000 signatures in less than three months – and built a neighborhood coalition around this issue. The Postal Service then reversed course and held a publicly announced meeting, with a good attendance of happy Tenderloin residents.

For the Tenderloin, having a real neighborhood post office is about being treated with dignity. The current facility at 101 Hyde has no visible staff, patrons cannot send out packages and vending machines to buy stamps were removed. It’s just a collection of P.O. Boxes, along with General Delivery for homeless residents. Its barren atmosphere makes it a haven for loiterers and drug dealers, earning it the moniker of a federally-funded crime zone. Plans for expansion were to build two service counters that would be staffed, making it an asset – rather than a blight – to a troubled street corner.

Now, the Postal Service has quietly pulled the rug under the Tenderloin – citing financial woes. President George W. Bush signed a law in 2006 mandating the Post Office to make a profit – and with the recession, the Postal Service has declining revenues. Cuts, we are told, are inevitable – and the expansion of 101 Hyde Street will face the chopping block.

But the Post Office should take a look at all its spending – including a wasteful program that purchase the homes of regional executives when they relocate. As CNN learned last week, the Postal Service has a “relocation” program that buys the homes of its employees – serving as a real estate middleman for executives who get transferred to different facilities across the country. The Post Office has done 1,022 transactions in the past two years, with the most expensive house bought for $2.8 million. The idea is to eventually sell the homes to a third party, but the real estate downturn makes that risky.

In an investigative report, CNN found a $1.2 million estate in South Carolina – that the Postal Service bought just last month, after its owner was relocated to run the Post Office in Carrollton, Texas. Realtors say it will be tough for the Post Office to find a buyer without a substantial loss. And even if they sell, it still costs the Postal Service an average of $58,000 per home through commissions and closing costs to do a transaction. Only now – with the media and the U.S. Senate focusing on this practice – has the Post Office said they will limit future purchases in the “relocation” program to $1 million.

Postmaster General John Potter recently told Congress that, due to its financial woes the Postal Service may have to end Saturday mail delivery – a problem for rural constituents. And the Post Office at 101 Hyde Street is just the latest example of how Tenderloin residents are being redlined – simply because the neighborhood is not viewed as profitable. Despite state and local laws that recognize residential hotels (SRO’s) to be apartments – and requiring landlords to install mailboxes in the lobby – the Postal Service says they can no longer afford to expand service to SRO tenants. Even if you get your landlord to put mailboxes in the lobby, the mailman will continue delivering it to the desk clerk.

San Francisco City Attorney Dennis Herrera is planning to sue the Postal Service for its failure to deliver mail to SRO tenants. But in the meantime, the Post Office has a lot of explaining to do: how can it continue to pay up to $1 million to buy mansions from executives, while refusing to provide basic mail service to poor neighborhoods?