The Politics of Kicking the DACA Can Down the Road 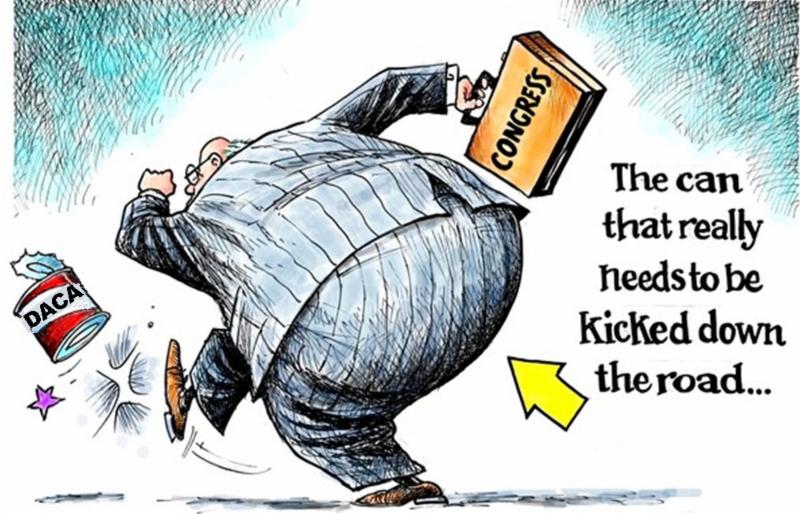 The Democrats’ compromise to support the Continuing Resolution to end the government shutdown in exchange for a tenuous Mitch McConnell commitment to a February 8th DACA vote has been sharply criticized by immigrant rights advocates as yet another instance of the party caving to the Republicans on this issue. But did Senator Charles Schumer really have much choice?

As the DACA issue took center stage in the Congressional debate over the shutdown, it has begun to get some pushback as well. This was the case because it clearly overshadowed in the media other issues important to Democratic constituencies, such as the Child Health Insurance Program (CHIP), recovery aid for Puerto Rico, as well as national security. But the most ironic aspect of this is the way the DACA issue is also overshadowing broader immigration concerns, as Trump is clearly zeroing in on eliminating “chain immigration,” the diversity visa lottery and promoting a merit-based approach.

Why it is increasingly being asked, are the Democrats so focused on DACA to the seeming neglect of these other issues? After all, when they controlled the Congress at the start of the Obama Presidency, they did little to promote immigration reform, and Obama pursued a “deporter-in-chief” strategy to unsuccessfully show Republicans he was tough on the undocumented. Even when pressed on using the executive order route to limited immigration reforms, he initially protested that he didn’t think this could be done legally.

Now that the Democrats are in the minority, it is widely understood that at most they have the power to block legislation, not enact it. As a result, it appeared pretty clear that they would have to punt on the DACA issue so that the ability to get McConnell to agree to discuss DACA renewal while sounding like a weak short-term solution could be the most the Democrats could have negotiated. The alternative, holding out for a more extended government shutdown on this single issue was always politically problematic. Would it be seen as responsible for a shutdown to affect the anticipated Democratic wave election this year? While no one knows for sure it would, no one really knows for sure it wouldn’t. But the Democrats” blocking power could be used creatively to stop some of Trump’s immigration deformation ideas.

While it appears that there is still time, and bipartisan support, for a DACA extension, the question keeps coming up, at what cost to broader immigration reform issues? DACA presents immigrant rights advocates with a painful Sophie’s Choice dilemma. Protect the upwardly-mobile DACA recipients at the expense of their undocumented parents who they put in peril (and themselves) by merely applying to the program? And for what is only a temporary fix. Who, after all, would have imagined on the early evening of November 8, 2016, that we would be in the midst of a Trump reign of immigration terror campaign today? No one, not even Trump.

If Schumer’s Democratic Establishment had taken a hard line on DACA and the shutdown, this would have also created Sophie’s Choice regarding such things as children’s health services and the recovery of hurricane-devastated Puerto Rico. Being in the minority, Democratic leadership options are greatly limited to the point of the use of symbolism in a long ball game in a political environment never seen before. An environment that on the same day can saw both an inspiring and massive Women’s March and the most extreme version of a federal government meltdown resulting in a hugely unpopular brief government shutdown. How does one project politically from this seemingly contradictory conjuncture?

The hope, of course, is that on February 8th we actually see at least an extension of DACA, if not a more long-term granting of legalization status. But it is also clear that Trump’s base seems to be pulling him more and more to the Right on immigration and other issues as the DACA advocates’ pressure increases. The irony here is that pro-DACA arguments include that most have good jobs, benefitted from the US educational system and are fitting into American society. These are exactly the things that bother the Right about these “illegals.” The arguments being made for DACA may be increasing opposition, not support, for its extension. That’s how weird the immigration debate has become in Trump’s America.

It seems we have to be prepared as well for the possibility of the ending of DACA. It raises questions about the practicality of deporting these 800,000 and the millions of undocumented family members. While we see the effects on Latino communities under ICE attacks in random raids on workplaces, courtrooms and people’s homes, and surprise deportations from routine immigration check-ins, a post-DACA world in which the federal government has each target’s address and family connections in writing is simply terrifying.

While this represents a serious misunderstanding of the role of immigration in American society, the frustrating part is that it is a conscious misunderstanding. A supposedly commonsense understanding of the need for a merit-based immigration policy when aren’t these the good jobs Americans should want and something that ignores the low-wage jobs Americans really don’t want? Is fair immigration reform even possible under such a radically ideologically-driven Trump-Republican regime? The major dilemma facing the DACA protestors today is that they are operating under the assumption that the American political system is currently functioning under relatively normal parameters. Unfortunately, it is not, making Schumer’s long ball strategy possibly the only game in town despite its short-term limitations and consequences.

Angelo Falcón is President of the National Institute for Latino Policy (NiLP), in whose newsletter this article first appeared. He can be reached at afalcon@latinopolicy.org.