by Carlos Villarreal and Angela Chan on August 13, 2008 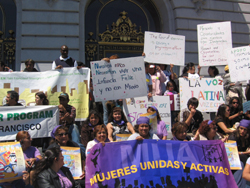 Carelessly referencing vague sources and leading with off the cuff remarks by law enforcement, the San Francisco Chronicle and reporter Jaxon Van Derbeken have published a series of damaging articles about juvenile immigrant offenders and the city’s sanctuary ordinance. The implication in the series of stories that began to appear on June 29, is that violent felons and crack dealers are taking advantage of the City’s Sanctuary Ordinance and specifically a policy at the Juvenile Probation Department that has shielded felons, according to the Chronicle spin, from deportation at taxpayers’ expense. A few major facts rarely tempered this incitement of reactionaries: the juvenile court system is very different from the adult criminal courts, the Sanctuary Ordinance never dictated the various tactics used by the Juvenile Probation Department, and the Sanctuary Ordinance doesn’t cause violence. To the contrary, the ordinance encourages people to communicate with law enforcement and other government agencies regardless of immigration status.

Instead, the reporting took the lead from the former head of the SFPD narcotics unit, Captain Tim Hettrich and the federal prosecutor in charge of the San Francisco area, Joseph Russoniello. While providing little hard data but plenty of hyperbole, these two did get multiple quotes and section headings. Their comments also framed the early stories on this subject for the Chronicle.

Hettrich was quoted in a June 29 article as saying, “Some of them have been arrested four or five times,” and “that is one of the big problems with being a sanctuary.” Who “some of them” are was not clear, neither was the number of “them” who had been arrested multiple times or for what. The Chronicle rarely referred to “them” as children or youth, but more often, as “crack dealers” or “illegal immigrant drug dealers,” i.e., lacking human worth or any reason for sympathy.

The tax-payer-funded Russoniello was “flabbergasted that the taxpayers’ money was being spent for the purposes of ferrying detainees home.” What was actually best for taxpayers was not seriously considered, since millions of tax dollars go each year to federal prosecutors like Russoniello, his staff, the federal courts, Immigration and Customs Enforcement (ICE), border patrol agents, and incarceration.

The articles themselves may have prompted the youth to flee the group homes, as the Chronicle built three separate stories almost entirely on the young immigrants walking away from the homes. First there was a story about “8 crack dealers” who left; then in another story 3 more left a home in a different county; finally the last one to leave warranted a 3rd story. Some reportedly received calls ahead of time, perhaps warning them that they might soon be subject to deportation. The Chronicle’s role in creating that circumstance was never explored. Moreover, the Chronicle also failed to look into the percentage of undocumented youth that ran away from group homes prior to the hysteria started by the paper itself.

Law enforcement innuendo and vague sources were commonplace in the series of articles. Referring to the flights home, Hettrich was quoted saying, “They probably get the round trip and the next day, they will be right back here. [emphasis added]” Paraphrasing Russoniello, Van Derbeken wrote, “drug dealers are being sent here as part of an effort that takes advantage of San Francisco’s leniency.” Again, without any real data or even specific anecdotal evidence, the message is pounded into the readers’ heads: drug dealers are taking advantage of our liberal policies.

When the facts seemed more solid the sources suddenly became more illusory. “Police” were cited as saying “many of the Hondurans – some of whom they believe are actually adults – live communally in other local cities at the behest of drug lords, who finance their travel here and threaten to kill their families if they cooperate with law enforcement.”

Such a detailed account is crying out for a more specific source, or at least a statement about why the source is kept anonymous. Was Van Derbeken just talking to officers who were passing on rumors, or were there consistent statements taken from a number of the juveniles? It certainly adds to the underlying story of criminals taking advantage of San Francisco liberalism, but a reporter actually following the evidence trail might find it isn’t true at all.

An evenhanded and truth-seeking journalist might also explain that juvenile offenders are treated differently than adults and look into the policy reasons behind this difference. Though these offenders were often described as “convicted” of “felonies,” neither word is completely accurate in the context of the juvenile system where, as Public Defender Jeff Adachi was quoted as saying, “The law states that we must act in the best interest of the child.”

Juveniles aren’t convicted in a criminal court, but receive juvenile dispositions in a court that is actually governed by a section of the family code, not the penal code. So when Mayor Gavin Newsom announces, under pressure from this series of Chronicle articles, that he has directed his “administration to work in cooperation with the federal government on all felony cases,” he is following the Chronicle’s lead of equating adult criminal convictions with juvenile dispositions. Where do they draw the line? Should 14-year-olds be deported? Twelve-year-olds? What about 14-year-olds who have parents here and who were brought here when they were 3 months old?

The Chronicle increased the stakes on July 20. Days after a suspect was captured in an apparently horrendous triple homicide, and after the initial reporting on the juvenile policy, a headline appeared that read “Slaying Suspect Once Found Sanctuary in S.F.” According to the Chronicle, the suspect, Edwin Ramos, had committed an assault and an attempted robbery as a teenager. Since he was undocumented, he could have been turned over to ICE and deported, but instead he stayed on city streets and may have killed three innocent people as an adult.

But Van Derbeken had to connect a lot of dots to hype this story. First, Ramos was, and is, a suspect, and has pleaded not guilty. Second, although this fact was hidden by the sanctuary-focused headline, months prior to the triple homicide ICE was informed that Ramos was in custody over another incident and ICE officials did not ask the Sheriff’s Department to hold him. Since the city was not going to file charges, he was released. So the feds were notified, and they did nothing. But it was the Sanctuary Ordinance, and the juvenile probation policy that got the bad rap throughout most of the article.

Finally the sources, again, make this story questionable. Another difference between the adult criminal system and the juvenile system is that juvenile records are not public records. Yet, the story on Ramos gives a lot of details about his juvenile offenses, only specifying that “records indicate” and “authorities said.” Ramos’ attorney has indicated that he believes the media is passing along a lot of misinformation about his client, and the lack of specific sources in the article begs the question of whether someone with a political agenda is feeding information to Van Derbeken and the Chronicle.

Whatever the sources or the motivation, the Chronicle chose to spin the stories in a way that equated the juvenile system with the adult criminal system, and blamed the Sanctuary Ordinance for increasing violence. At a rally in front of City Hall on July 29th, 27 community, faith and advocacy groups made it clear that juveniles are treated differently by our laws, and ought to be treated differently regardless of immigration status. Speakers also emphasized that the Sanctuary Ordinance does not cause crime but actually helps keep communities safe.

Unfortunately, these two major points neither sell newspapers nor drive traffic to websites. The Chronicle failed to report the Tuesday “pro-immigrant rally” attended by over 200 people, including three members of the Board of Supervisors – opting instead to give frontpage coverage to a rally that occurred the next very day that was organized by 12 people in a fringe anti-immigrant group called the Minutemen.

As the saga continues, a family in the Mission was raided by a collaborative effort between ICE and San Francisco Police Department officers this week, and the Mayor is expected to announce a policy next week that refers a broad range of undocumented youth in juvenile hall to ICE.