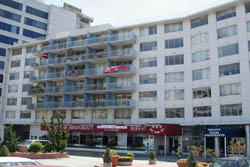 A struggle three years in the making finally achieved some closure Thursday at the weekly Planning Commission meeting at City Hall. After nearly four hours of examining and reexamining nine separate action clauses apart of the carefully crafted development agreement, the commission offered its final approval on the project, passing the legislation along to the Board of Supervisors. This important achievement required the negotiation of two very different groups of citizens in San Francisco.

Trinity Plaza, an apartment complex that will contain 1,900 rental units, 92,000 square feet of usable open space, 60,000 feet of commercial space, and 1,200 resident parking spaces, is funded compliments of the generosity of Angelo Sangiacamo. Of the 1,900 rental units, 360 will comply with rent-controlled housing requirements while an additional 12% of the units will meet the city’s affordable housing standards. The housing project will make history, guaranteeing a net yield of 34% affordable rental units.

This marks an important victory for all residents of San Francisco. A new precedent has been set for the terms of negotiation between developers and tenants. Though he originally planned to resurrect the soon-to-be ashes of the current complex at 8th and Market with condominiums, Sangiacamo was brought to the negotiating table through the steadfast work of the Trinity Plaza Tenants and Tenderloin Housing Clinic Director Randy Shaw (editor of Beyond Chron). Today, the two sides have before them a 15-year term development agreement that both protects the tenants of Trinity Plaza and assures modest returns to developers.

As Craig Nikitas of the Planning Staff sees it, the contract “provides benefits to both parties, sets forth rules of development, and protects the developers’ rights”. Nonetheless, the Planning Commission found several contentious issues in the legislation, one of which is yet to be resolved.

One “outstanding issue” considered was the percentage of Below Market Rate (BMR) housing provided in the project’s contract. The project sponsors asked that the Planning Commission disregard the original language in the contract requiring the percentage of BMR housing to be in compliance with current city standards. The agreement, reached before the city’s increased inclusionary housing requirements (from 12 to 15% onsite), more than makes up for the lacking 3% of affordable housing units with the 360 units of rent-controlled housing.

The primary dissent to this proposal came not on behalf of the commissioners, but from the public and the written opposition of Supervisor Sophie Maxwell. Maxwell, who sent in a letter late Thursday morning demanding the project comply with the new requirement of 15%. All complaints, however, were dismissed as trivial due to the developer’s compromise in maintaining rent-controlled housing and a unanimous resolution passed by the supervisors last year permitting the 12% requirement.

During public comment concern was also voiced over a portion of the contract requiring rental units in a building designated “A” be mapped as condominiums. This decision was viewed as an option under which the developer could renege on the rent-control requirements by selling the property to another investor. As Jim Reuben of the project sponsors Ruben and Junius assured, however, the move merely provides the developer the option of gaining additional capital to maintain the greater Trinity Plaza Project. Construction costs are expected to continue to increase in coming years and if they do, it may be necessary to accrue the funding of an additional investor to keep the project afloat. The city attorney assured the deed for the units would include the same strict rent-control pricing requirements agreed upon in the original contract.

Shaw argued that, given his 25 years of fighting against tenant displacement, and the fact that he is the person who would be blamed if the rent-controlled building were to become condos, if he were satisfied with the rental housing protections the Commission should be as well. This led Commissioner Sugaya to express his support for the mapping, which then passed unanimously.

The stipulate that earned the division of the commissioners was that regarding the proposed 250 commercial parking spaces associated with the plaza. The number of spots, reduced from the current 450, was still unacceptable to half of the commissioners. Specifically, Commissioners Olague and Moore offered vehement opposition, arguing the spaces would add more congestion to an area already suffering from an excess of parking garages. Olague cited vacancies at Moscone Center and the Stockton garage, as well as the 320 short-term parking spaces being added to 1160 Mission Street as proof of a parking abundance.

Commission President Dwight Alexander and Commissioner Antonini, however, saw the situation differently. They noted the introduction of Westfield’s and Bloomingdale’s shopping centers into the area would eventually lead to parking deficiencies in the already existing garages, and justify the creation of the Trinity Plaza lot in order to maintain the flow of business in the area. As is stipulated, nearly 60,000 square feet of the plaza will be dedicated to commercial business use. Combined with the needs of businesses already existing in the area including the Orpheum Theatre across the street from the project, parking in the area may still prove to be insufficient even with the additional 250 commercial spaces.

Due to a 3-3 tie vote on the subject, discussion of the appropriate number of parking spaces will be moved to the board. Sangiacamo’s representative made it clear, however, that the elimination of those 250 spots and consequently $13 million dollars in annual revenue would drive the final nail into the project’s coffin. The developer and tenant community has exhibited what Alexander recognized as “good public-private partnership” in crafting this agreement.

In going through with this project, Sangiacamo will be taking financial hits most developers would consider insurmountable. It would be pure folly for the Board to look this gift horse in the face.