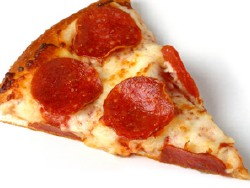 Amid the snark-inducing “Pizza as vegetable” headlines caused by Congress gutting the USDA’s new nutrition requirements for school meals, the headline the NY Daily News slapped on the widely-reported Associated Press article got very little play, but more accurately described the problem. “GOP says healthier school lunches are too expensive” really captures the essence of the problem – not that tomato paste will still be considered to be the nutritional equivalent of a serving of broccoli or carrots, not that potatoes will continue to appear in many school cafeterias four or more days a week, but rather that the positive changes to school food which had been put forth by the USDA came without sufficient funding to cover their own cost.

The new school meal regulations came with 6 cents of extra federal funding, despite the fact that the “proposed rule” (as it is officially called) estimated the cost of the more nutritious food at an additional 50 cents for breakfast and an additional 14 cents for lunch. What’s more, the estimated 64 cents of higher cost – offset by a mere 6 cent increase from the government – is based just on the new food requirements, and does not take into account the cost of compliance with other sections of the proposed rule, which are not currently being targeted by Congress.

A separate provision of the proposed rule requires free fresh drinking water be made available in all cafeterias during meal service. The State of California also requires drinking water be available, but school districts can be granted exemption from the state (but not the federal) requirement by applying for a waiver on the grounds of financial hardship; this is exactly what San Francisco Unified School district did in June 2011. While the SFUSD did not quantify the cost of installing the triple sinks which the California Retail Food Code requires to wash pitchers for serving fresh water, or alternatively the cost of installing drinking fountains in those cafeterias not already equipped, the district stated in its waiver request that “financial constraints and health and safety regulations will limit the ability of SFUSD to provide additional tap water outlets in the cafeterias” and aimed for a goal of compliance by 2015-16.

Another little-noticed section of the proposed rule, called the Equity in School Lunch Pricing provision, also has the potential to negatively impact the bottom line for school food service, further straining what is often an already pinched budget. The provision, which took effect July 1st 2011, requires any school which previously charged less than $2.46 for a “paid” meal (that is, a meal purchased by a student not qualified to receive government-paid meals) to begin raising the “paid” price year by year.

Ironically, the intent of the provision is to generate more money for the cafeteria by making sure that lunches students buy are priced high enough to bring in the same amount of money as a government-paid “free” lunch. Some schools are sensitive to the fact that many families who just miss the cutoff for eligibility for a government paid meal (about $41,000 for a family of 4 with two kids) may still find themselves hard-pressed to afford enough food. These schools have tried to keep their paid meal price low enough that students from food-insecure households, who don’t qualify for government paid meals, can still afford them.

In a bit of hair-splitting that seems Scrooge-like to some, Congress decided that this “underpricing” of paid school meals meant that National School Lunch Program (NSLP) funds, intended to support meals for the poorest children, were instead helping to underwrite meals for the not-quite-poorest children. One would almost think that Congress believed that it was actually the children of the rich benefiting from the low price some school districts charge for their paid meals, but if there is any data supporting the idea that upper middle class children are eating bargain-priced NSLP meals in droves, I have yet to see it. Still, if this mandatory price increase for paid meals were guaranteed to generate more money for school cafeterias, it might be understandable.

The problem is, it is nearly impossible to predict how much additional revenue these meal price increases may bring, or even if they will increase revenue at all. For a school with 100 students who paid $2 for a cafeteria lunch last year, a price increase to $2.10 could potentially bring in $10 more per day. However, if just 5 of those students stop buying school lunch because, in a worsening economy, their families can no longer justify buying a school meal when a sandwich and an apple brought from home is cheaper, then the entire $10 increase evaporates.

Even the proposed rule itself admits that increasing paid meal prices is likely to decrease the number of student purchasing school lunch. A report commissioned by the USDA, written by Mathematica Policy Research, and cited in the proposed rule, states unequivocally that “all else equal, students who were not income-eligible for free or reduced-price meals were less likely to participate in the program when the full price of the meal was higher.” The report further states that “this negative effect of meal price on the likelihood of participation (for those who must pay the full price) matches findings from previous studies of school meal participation.”

In other words, at a time when everything from health care premiums to state college tuition is escalating at a dizzying rate, students and their families cannot necessarily be counted on to continue to pay increasing prices for school lunches, no matter how “equitable” Congress may feel the increases are.

The hard working folks who run our public school cafeterias are caught between a rock and a hard place. New regulations mandating more nutritious food are worthless without the money to put them into effect. Forcing schools to spend 64 cents per day on better food while only offering 6 cents to offset the cost can lead to some bad outcomes. Schools have the choice of complying with the regulations and taking a 56 cent per day per student hit, which quickly scales up to 5 figures in a small to medium size school district, or to 6 or 7 figures in a larger school district, or attempting to skirt the new requirements and hoping they don’t get caught. Trying to bring in more money by raising meal prices risks driving kids out of the cafeteria altogether.

San Francisco public schools have long offered better quality nutrition than the USDA requires, and paid meal prices are already $3. Pizza is not considered a vegetable, white potatoes are not a menu staple, sodium is lower than most other school cafeterias, and whole grains, fresh fruit, and fresh raw vegetables appear daily; regardless of Congressional action, that will not change. But these more nutritious meals cost more, and to pay for them, the SFUSD Student Nutrition Services department runs a substantial deficit.

With the latest news from Sacramento indicating that further budget cuts for public schools may be on the way after January 1, pressure is bound to be placed on nutrition departments here and around the country to reduce deficits, not grow them. The real story about what Congress is doing has nothing to do with pizza as a vegetable; the real story is that with the annual cost to the US of obesity at $270 billion, Congress should not be doing anything to encourage today’s young people to develop a habit of eating pizza and French fries daily, while claiming the country “can’t afford” to serve kids something better. Think serving kids healthy food is too expensive? Try calculating the healthcare costs for these kids when they grow into overweight, diabetic, hypertensive adults, unable to work and dependent on government support during their prime earning years. Pay more now, or pay a lot more later on.