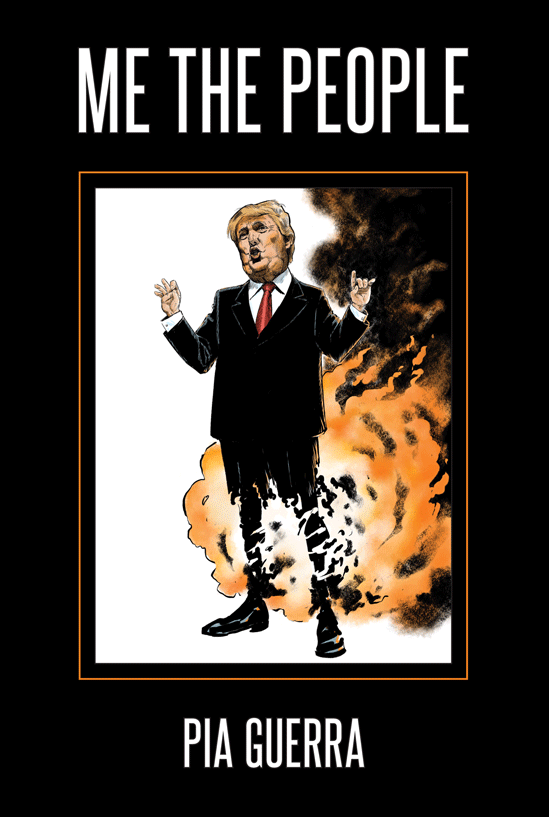 Pia Guerra’s Image Comics collection “Me The People” makes a timely appearance for Americans numbed and traumatized by the venality and mendacity of Trump’s America.  The visible wincing and sometimes loud laughter Guerra’s images evoke will reassure these readers that their antipathy towards Trump and his enablers is not freakishness.  It’s a sign of love for a country and society far better than the hellhole Trump and his allies are trying to establish.

Many of the cartoons collected in this volume originally appeared on the political cartoon website The Nib.  Doing political cartoon commentary may appear to some readers as a stretch for the artist co-creator of the comic book series “Y: The Last Man.”  But then, both “Me The People” and “Y” have an undercurrent of making one’s way in the midst of an ongoing apocalypse.

For those weary of the simplistic caricature that’s the stock in trade of way too many American newspaper editorial cartoons, Guerra’s images deliver a very refreshing visual tonic.  There are no amusingly overweight Trumps or caricatured donkeys or elephants to be found in Guerra’s book. The real-life people depicted in Guerra’s cartoons are rendered in fairly realistic detail.  However, as admirers of Drew Friedman’s cartoon art will quickly point out, realistic renderings are not necessarily the same as flattering renderings. An image of Trump smugly squatting and mooning a group of reporters captures both his smirking self-delusion at supposedly putting one over on the press and the horrifying sense of Trump’s happily treating the American flag as his personal toilet paper.

The power of Guerra’s images achieve full effect when readers meet her halfway in fully decoding her cartoons.  The cover illustration for “Me The People” apparently depicts a talking Trump’s legs exploding in front of a fireball.  But alert readers will realize Guerra is visually alluding to that old childhood (but still accurate) taunt “Liar, liar, pants on fire.”

What led the “Y” artist to create the contents beneath this collection’s covers was a horrified realization after the evening of November 8, 2016.  It sank in for her that “(t)he biggest joke of a human being in the world was going to be President.” Rather than doing nothing and/or sinking into horrified despair, Guerra responded the next morning by taking up a pencil and starting drawing.  The resulting image opens the collection. It’s a visual modification of the Lincoln statue inside Washington, D.C.’s Lincoln Memorial. Instead of having the assassinated president looking out into eternity, Guerra’s Lincoln holds his face in his hand in sorrowful disbelief.  It’s as if the man who shepherded America through the awfulness of the Civil War couldn’t believe a future American generation carried on his legacy by entrusting their country’s future to a highly unqualified man with an unfortunately prominent “snide, bullying smirk.”

From that initial image, Guerra’s collection jumps around in time covering some of the major moments of the Trump presidency aka America’s first year in political hell.  These moments include the AHCA fight (via a nod to a famous Tiananmen Square protest image), the racists emboldened by Trump’s election, and the Parkland mass shooting.

Yet reading “Me The People” does not mean drowning in self-serious political graphics.  Guerra clearly wore her Burkinabe resistance artist hat to sublimely make her political points.  There are references here to Rocket and Groot from “Guardians of the Galaxy,” the “Here’s Johnny” scene from Stanley Kubrick’s version of “The Shining,” Charles Schulz’ “Peanuts” comic strip, and “Men In Black.”  Comedians Stephen Colbert and Michelle Wolf also make very welcome appearances.

However, Donald Trump isn’t the only Trump family member receiving Guerra’s artistic skewering.  Surprisingly, it’s not the likes of Fredo Trump (aka Donald Trump, Jr.) who get taken behind Guerra’s artistic woodshed.  Melania Trump gets repeatedly called out for her privileged complicity in supporting Trump. Shots of the Istanbul edition of Ivanka Trump’s Jackboot Collection mash together the First Daughter’s alleged glamor with her obvious willingness to sanction political repression for personal profit.

Guerra’s best slam against the criminally complicit Ivanka Trump doesn’t even feature the so-called President’s object of skeevy affection.  Instead, the artist defends the accuracy of Samantha Bee’s characterization of Ivanka Trump as a “feckless cunt.” Those who argue that Bee should have used a far less “offensive” word seem to be those eager to return to their sleep of conscience and commitment.

The political enablers of Trump in both Congress and his staff also receive artistic pummelings for their unwelcome contributions to the dumpster fire that best characterizes the Trump Administration’s daily rule.  Senate Majority Leader Mitch McConnell looks like a psychotic serial killer, which is no more than the Butcher of American Democracy deserves. Press Secretary Sarah Huckabee Sanders, aka Trump’s professional liar and apologist, gets portrayed as a moronic thug.  Department of Justice head and self-interested jerk Jeff Sessions complicitly ignores Trump’s feeding the U.S. Constitution into a figurative paper shredder.

But Guerra’s biggest ire gets reserved for vile nativists like Stephen Miller who devised the family separation policy and the ICE thugs who blandly carry out such heinous policies.  That ire doesn’t get translated on the printed page into bludgeoning and obvious Michael Moore-style criticism. Instead, Guerra’s sharp visual wit resembles the aftermath of a well-wielded samurai sword stroke, where the target is killed before the now-dead opponent realizes what has happened.  One cartoon shows half-a-dozen immigrant boys in an ICE kid cage watching TV news coverage of the recent Thai cave rescue. Along the bottom of the screen runs the chyron of “Boys Reunited With Families.” Another cartoon paints Trump as a combination of Krampus and evil child-snatcher as he’s carrying a sack of crying children on his back.

But the most powerful condemnation of ICE’s awfulness plays off the familiar image of the child greeting her father after he returns home from a hard day’s work.  The little girl asks “Did you take any kids from their Mommies and Daddies today?” To which her father in Border Patrol agent gear happily responds “So many, Pumpkin!  I’ll tell you all about it over dinner.”

The odd title of Guerra’s excellent collection comes from one of her cartoons.  The drawing captures both Trump’s deliberate mangling of the U.S. Constitution and his sociopathic narcissism in one memorable image.

Guerra’s collection doesn’t need to apologize for her intelligent hatred of the current totalitarian regime in the White House.  Trump’s “blitzkrieg of batshit and bigotry” may seem overwhelming. But her closing essay reminds the reader that overwhelming is not the equivalent of unstoppable.  Open laughter and mocking do wonders for undercutting the respect and deference Trump and his minions undeservedly expect as their due.

(“Me The People” is now available at such well-regarded comic book shops as Comix Experience (305 Divisadero, SF).  To see samples of Guerra’s cartoons, go to The Nib at www.thenib.com .)