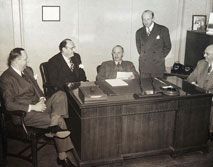 Thanks to Steven Spielberg, the whole world knows about the “List” of Oskar Schindler which saved the lives of 1200 German Jews in World War II. But few know about the Philippine List compiled by the Frieder brothers which saved an exactly similar number of German and Austrian Jews in 1939.

It was a shameful time in US history when US policy barred 900 Jewish refugees from disembarking from their liner (St. Louis) in Miami, forcing the ship to return back to Germany, dooming its hapless passengers to extermination in Nazi concentration camps.

But it was a proud moment in Philippine history even though it has never been the subject of a movie nor is it even widely known by Filipinos.

It was celebrated last month on February 12 in Cincinnati, Ohio with a reunion of Jewish refugees from the Philippines who had gathered to mark the 60th anniversary of the destruction of their Manila synagogue, Temple Emil.

Organized by the Center for Holocaust and Humanity Education at Hebrew Union College-Jewish Institute of Religion of Cincinnati, the event culminated a weekend that reunited 98 Frieder relatives and seven surviving members of the 1939 List who gave testimony to the courage of the four Frieder brothers who organized the rescue effort in the darkening days before World War II. The event also honored Manuel L. Quezon, the first president of the Philippine Commonwealth.

The story of the Manila rescue was recounted by Frank Ephraim in his book, “Escape to Manila: From Nazi Tyranny to Japanese Terror” (University of Illinois Press, 2003). Ephraim’s book is based on his interviews with survivors and on his own eyewitness account as a child who was one of 1200 Jewish refugees who arrived in Manila in 1939.

The history of the rescue begins with the decision of the Frieder brothers in 1918 to relocate its two-for-a-nickel cigar business from Manhattan to Manila, where production would be cheaper. Alex, Philip, Herbert and Morris Frieder took turns overseeing the business in the Philippines for two years each joining a community that had fewer than 200 Jews.

In 1937, Philip and Alex Frieder met European Jews who had straggled in to Manila’s port from Shanghai and heard harrowing accounts from them about the fate of the17,000 Jews in Shanghai who were seeking to flee the Japanese after they had fled the Nazis.

The Frieders decided to ask the help of their poker buddies to let the Philippines become a haven for the fleeing Jews.

Fortunately, one of their buddies was Paul V. McNutt, the American High Commissioner for the Philippines; and another was Manuel L. Quezon, the president of the Philippine Commonwealth. (Another poker crony was a young officer named Col. Dwight D. Eisenhower, the aide of Gen. Douglas MacArthur, then Field Marshall of the Philippines).

McNutt succeeded in convincing US State Department bureaucrats to turn a blind eye and to quietly allow Jews to enter Manila at a rate of 1,000 a year. (It was slightly increased to 1200).

In a letter written in August of 1939, Alex Frieder wrote of Mr. Quezon’s response: “He assured us that big or little, he raised hell with every one of those persons* He made them ashamed of themselves for being a victim of propaganda intended to further victimize an already persecuted people.”

Quezon even donated some of his own personal land to help the Jewish refugees.

At the Cincinnati event, Quezon was posthumously honored with the “Righteous Person” title which, in the tradition of Israel and those commemorating the Holocaust, is the one given to Gentiles (non-Jews) who helped the Jewish people in their time of persecution.

Accepting the honor on behalf of the late President Manuel L. Quezon was his grandson, Manuel L. Quezon III, a Philippine Daily Inquirer columnist, who told the New York Times reporter “We’re a very hospitable people and we had experienced exile and imprisonment during the Spanish colonization and the early American occupation, so someone of my grandfather’s generation would have been conscious of the plight of refugees. We’re a sucker for anyone who’s suffering.”

Also at the Cincinnati celebration was Alex Frieder’s daughter, Alice Weston, who described his father and uncles as “the right persons in the right place at the right time.” Alice, now 78, was a young girl in Manila in 1939 when her father and her uncle Philip organized the rescue. “My father wasn’t an exceptional person,” she said. “He was an ordinary businessman and he saw this horrible situation and he thought of a way to help a little bit.”

The Japanese attack on Pearl Harbor and invasion of the Philippines ended the Jewish rescue.

After the Japanese occupied the Philippines, interestingly enough, they did not intern the German Jews as they initially treated them as Germans, then as stateless persons. In his book, Ephraim explained that the Japanese “had a dim view of German racial doctrines – they weren’t Aryans.”

The survivors at the Cincinnati gathering recounted their war-time experience of subsisting on “cracked wheat and coconut milk” during the Japanese occupation.

In response to the arrival of the American liberation forces in the
Philippines in 1945, the retreating Japanese burned much of Manila.

Eva Asner, a 1939 Manila refugee, told the audience in Cincinnati that when her father, Bernhard Susskind, returned to the fire-engulfed city to rescue a nurse, he was shot to death. He was one of the sixty-seven Jewish refugees who were among the 100,000 Manilans killed by the retreating Japanese and the Americans who bombed the hell out of the city instead of risking more American lives in armed combat with the Japanese soldiers. In the course of the American bombing, Temple Emil burned to the ground on February 11, 1945.

At the Cincinnati celebration, Philippine Ambassador to the US Albert F. del Rosario announced that Philippine President Gloria Arroyo will present the National Legion of Honor, Commanders Class, to writer Frank Ephraim and posthumously to all the Frieder brothers and to McNutt.

“We recall today not only the justice in the face of tyranny,” del Rosario said, “but just as importantly, the common humanity that we can share, even in the darkest of times.”