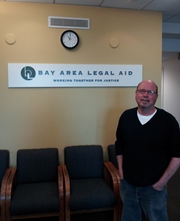 Legal aid attorney Phillip Morgan, who likely has represented more public housing tenants in San Francisco than anyone, is retiring. As an attorney for Bay Area Legal Aid, Morgan fought for housing rights with countless clients over the course of his long career. He had an institutional knowledge of the SF Housing Authority that will surely be missed.

Morgan began working for Bay Area Legal Aid (then called San Francisco Neighborhood Legal Assistance Foundation or SFNLAF) in 1986. His arrival coincided with declining federal support for legal services, a problem that worsened over time. His work over the span of nearly thirty years allowed him to gain a depth of perspective in the struggles over housing rights in the City.

When Morgan joined SFNLAF, he was among a number of staff attorneys representing tenants. But budget cuts limited resources to the extent that Morgan was sometimes the only attorney available to represent tenants. Public housing became his focus because Legal Aid was the defender of last resort for this population.

While Morgan has worked with the Eviction Defense Collaborative and served as the board chair of the Tenderloin Housing Clinic for 27 years, his primary work was in public housing. He was forced to deal with the ongoing incompetence of the SF Housing Authority for decades, and the fact that he never gave up is a tribute to his quiet tenacity.

As a longtime board member of the THC, Morgan recalled the early fights to provide rights for SRO tenants. Initially, he said, SROs were uninhabitable, but the work put into gaining protections and tenant rights has allowed SROs to be maintained as a source of affordable housing for the city’s low-income residents. Morgan also reflected on the success of the Modified Payments Program, which he was originally skeptical of, but realized its effectiveness.

Additionally, through his work with the Eviction Defense Collaborative, he has seen how the state of affordable housing has changed in the City. When the Collaborative first started, a majority of his clients lived in rent-controlled housing and were of very low income. People could still afford to move elsewhere in the City, but that isn’t the case today.

Many of his clients used housing vouchers to afford rents, and he commented on the need for Board of Supervisor’s recent legislation on legalizing in-laws to be passed.

With a growing affordable housing crisis, he believes that the most marginalized will face the greatest consequences. He’s already seen how the city’s African American population has dwindled, and noted that the majority that can afford to stay in San Francisco is because of public housing. But even then, he believes that the privatization of public housing will do more harm than good.

Part of the reason for retiring, he said, was to let a younger generation of critical and thoughtful housing rights advocates take on the current challenges of affordable housing. Reflecting on the challenges he faced decades ago and what he is dealing with now, he said that much of the same problems have persisted. Things have gotten worse, but he feels like the work he’s done will be carried on and built upon. Still, he said, the fact that clients call him to thank him months and years after, gives him home and inspiration.

Morgan said that housing rights work will require the collaboration with many agencies, and that they must be proactive at thinking about solutions for the future, not just fixing what has already been done.

He cited the increased vulnerability for seniors who are finding it difficult to maintain their homes because of infrastructural deficiencies and also speculative markets for new high-rises. The problems for families looking for affordable housing are also dwindling, he said. He believes that planners will need to find ways to address these problems or else the City’s housing crisis will not improve.

These challenges will take collaboration, not competition, he said. With the amount of experience Morgan has, perhaps it would be wise to heed to his advice.