PG&E Drops Another $9 Million into Prop 16; Asks for a $4 BILLION Rate Hike 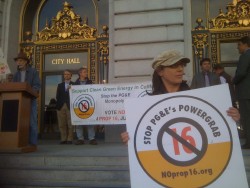 “They just don’t shock me anymore,” said Supervisor Ross Mirkarimi at a rally last night against PG&E. The company has already spent $35 million to pass Proposition 16 which would cement their monopoly, and has dumped another $9.5 million in the past five days. Meanwhile, PG&E (who paid its C.E.O. $9.4 million last year) is requesting the California Public Utilities Commission to grant them a 30% rate hike – which would generate $4 billion in profits. The CPUC is holding public hearings on the rate hike across the state, with the first one last night in San Francisco. Because Prop 16 requires a two-thirds majority of voters to pass a public alternative to PG&E, consumers will be trapped paying these ever-escalating rate hikes in the future. And with “No on 16” raising less than one-tenth of one percent of PG&E’s money, activists must get creative to push their message.

“What do Meg Whitman and PG&E have in common,” asked John Rizzo, Chair of the Sierra Club’s San Francisco Chapter at the rally. “They’re both spending tens of millions of dollars to buy an election. But the difference? Meg Whitman is using her own money. PG&E is using our money to pass Prop 16.” While PG&E has sent leaflets saying we are “powerless” that elected politicians spend taxpayer money, there is nothing ratepayers can do to stop PG&E from spending its money on Prop 16 – unless the legislature passes SB 1441.

With the Supreme Court’s decision in Citizens United, we can expect even more corporations from freely spending their treasuries to hi-jack our electoral process. PG&E is doing it with Prop 16, but the June ballot also has Proposition 17 – which is funded by Mercury Insurance to maximize its profits. “If Prop 16 passes,” said Mirkarimi, “every state with an initiative process will be vulnerable to this corporate predatory interest.”

Last night’s rally – which included a march from City Hall to the CPUC at 505 Van Ness – was timed for a public hearing at the CPUC to consider PG&E’s request for a rate hike. If the hike gets approved, PG&E customers will see their bills go up 30% – a windfall of $4 billion for the utility company. And if Prop 16 passes, local municipal efforts to give customers a competing alternative would require the daunting task of a two-thirds vote of the electorate. In other words, PG&E could get away with more rate hikes in the future.

Yesterday, Capitol Weekly reported that PG&E put another $9.5 million into the Prop 16 campaign, upping its warchest to $44.2 million – entirely funded by the utility company. TURN, which is leading the campaign against Prop 16, has raised $35,000.

But Mark Toney, Executive Director of TURN, pointed out that PG&E’s “coalition” to pass Prop 16 is starting to fragment. The California Chamber of Commerce may have endorsed “Yes on 16” – but its affiliates in Fresno, Riverside, Stockton, Fremont and other places (sadly, not San Francisco) have dissented. The Republican Party in San Joaquin County actually flipped from “yes” to “no” (despite the State Party taking a “yes” position), and yesterday the Los Angeles County GOP came out against Prop 16. Even the San Diego Taxpayers’ Association has broken from its statewide organization and is “no” on Prop 16. When presented with facts, even conservatives are against it.

But with PG&E throwing so many millions, some opponents have taken a more creative route – using new media tactics to get their message out. Ben Zolno of Sebastopol has run a YouTube campaign that prides on spending only “one-millionth” of what PG&E is spending to pass Prop 16. When news broke that PG&E has dumpted another $9 million, he announced on his blog that he will now spend an extra nine dollars – and asked readers how he should spend that money.

At last night’s protest, activists even tried invoking pop culture in a similar way that Pride at Work pulled off recently. By taking Gloria Gaynor’s “I Will Survive,” they re-wrote the song with these lyrics (complete with back-up dancers and some brass instruments as backup):

First I was afraid, I was petrified
When I saw my PG&E bill had gone sky high,
I spent so many nights thinking how they did me wrong,
Then I grew strong, I learned how to carry on
‘Cause we’ve got a choice, of who we pay
I wanna dump PG&E and get clean energy
I can change who sends me juice, we can break monopoly
16 takes away my choice, and that really bothers me

So just vote NO … on Prop 16
Let’s turn it around now, ‘cause PG&E’s just playing mean
They’re dropping 35 mill, just to trick me with their lies
And all the while, they’re planning a 30% rate hike
Oh no, not I … I will survive
I’m fighting these PG&E bills that are burying me alive
So vote No on Prop 16, to make our power clean
I will survive … I will survive.