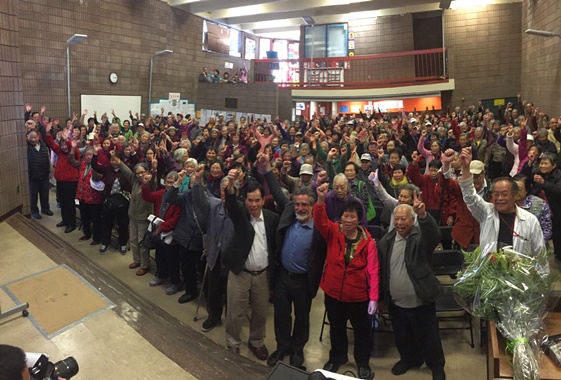 Aaron Peskin thanks CTA today for its key support

Aaron Peskin won a major victory in the D3 Supervisor’s race, reassembling the North Beach/Telegraph Hill/Chinatown political coalition that easily won him re-election as supervisor in 2004. With 100 % of the vote counted Peskin defeated Julie Christensen by a 53-43%  margin (I look forward to Tim Redmond reminding his readers that I said yesterday that Peskin would win handily).

Peskin’s victory will have multiple interpretations.  I see it as sending a powerful message that tenants rights and affordable housing are the preeminent issues in tenant-heavy supervisorial districts.  Peskin’s win also demonstrates the grassroots power of the Chinatown activists who refused to support Mayor Lee’s choice of Julie Christensen and went all out for Peskin’s election.

While some may see Chinatown resistance to Christensen as a response to the mayor’s failure to appoint Cindy Wu to replace David Chiu, the driving force was political, not personal. Once Christensen made it clear that she was open to the rezoning of Chinatown in a manner that put the community’s primarily low-income character at risk, activists had no choice but to go all out to defeat her.

By threatening Chinatown’s future, Christensen raised the stakes in this election as never before. And now that Aaron Peskin has been elected, Chinatown again will be represented by a strong ally committed to its protection.

Aaron Peskin has repeatedly acknowledged the huge role played by the Community Tenants of Chinatown (CTA) in his campaign. Despite all of the lies about voter fraud coming from the Christensen camp, CTA members never stopped working; the Chinatown voter outreach and turnout was enormous for what otherwise was a low turnout election.

Conventional wisdom claimed prior to the election that a Peskin victory was significant because it would give the Board a progressive majority. But this ignores how few 6-5 votes occur at the Board.

All of the major tenant legislation, including Jane Kim’s Eviction 2.0 package, passed with more than six votes. So the 6-5 progressive majority with Peskin’s election has been vastly overestimated.

The real value for progressives in having Peskin on the Board is twofold. First, he is a creative and innovative problem solver. He can amend progressive legislation to draw moderate votes, and knows how the city works as well if not better than any current Board member.

Second, Aaron Peskin is the master of the win-win negotiation. He knows how to keep all sides (somewhat) happy and will move the city forward on the Board.

As I wrote in predicting a Peskin victory, Aaron now sees himself as “the representative of a larger cause.” I saw him winning this race handily because I knew that D3 voters had not forgotten all he had done for them as a supervisor.

So many of the lies spread by independent campaigns for Christensen reflected people who either were not around when he was a supervisor or are ignorant of his true record. The voters saw through this foolishness.

Peskin is a builder of consensus, not a destroyer. He is also a fun person to have on a Board which can use more levity. All of San Francisco, including Mayor Lee, benefits from his return to public life.

Mayor Lee won 57% of the vote despite unrelenting negative coverage in the SF Chronicle and a lackluster campaign caused by the absence of serious competition. Many progressives accuse Lee of ignoring the housing crisis while he spearheads a $310 million affordable housing bond, has the city fund the purchase of multiple buildings whose tenants faced Ellis Act evictions, and has moved heaven and earth in Washington DC to fund the renovation of public housing for low-income families. This on top of a teacher housing program, a massive increase in Ellis Act legal defense funding, and the spending of $18 million to convert an entitled market rate project at 16th and South Van Ness in the Mission to nonprofit affordable housing.

When it comes to Lee’s housing record, some prefer to ignore the facts.

Lee made a major misjudgment in picking Christensen over Cindy Wu in D3. As I wrote on January 8, 2015, by appointing Christensen “Peskin immediately becomes the favorite to win in D3. He has the backing of 8 Washington opponents (D3 strongly opposed the project) as well as nearly all voters concerned about protecting tenants.”

Lee badly hurt his image among progressives citywide by not simply appointing Christensen, but then trotting her out to event after event in an effort to inflate her otherwise nonexistent efforts to represent D3. Lee became associated with Christensen’s anti-tenant comments, and her talk about bringing tech into Chinatown and changing the neighborhood’s zoning.

I think that the mayor will grow to appreciate Peskin’s presence on the Board, because both share a common desire to do what’s best for San Francisco. The mayor paid a steep political price for his strong backing of Christensen and needs to rebuild some weakened relationships as he starts his next term (A Lee staffer expressed such confidence in a Christensen victory when I saw them at the John’s Grill event on Election Day that I felt compelled to make a bet on Peskin. I wish I had been offered more wagers).

I also correctly foresaw the passage of Prop A and the defeat of Props F and I. I think the only surprise of the three outcomes was that Prop I appears to have lost by a larger margin shown in any pre-election poll. My sources had Prop I losing for some time but there was an additional shift against it in the week before the election.

I don’t think anyone imagined F would do better than I, and while the final tally may shift, I think that announcing the “framework” for the Mission Plan proved a major mistake. Once Prop I had a $600 million price tag attached to it, its support plummeted on the westside as reflected in the one-sided absentee vote count against it.

As I previously discussed, the issues behind Props F and I will be front and center in 2016.

There were a lot of people who took a leave from their jobs to work day and night on these campaigns. I congratulate you all for your commitment to San Francisco.