Peskin Has Muni Fund-Generator in the Works

by Alison Stevens Rodrigues on October 4, 2005 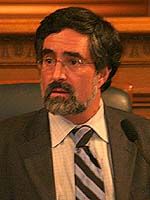 Those frustrated with San Francisco’s Municipal Railway have an ally in Supervisor Aaron Peskin who believes he might have a way to generate funds for the city’s public transit system without hiking fares or cutting services. At a meeting of the Rules Committee on Sept 21, Peskin’s lack of support for Hunter Stern, Mayor Gavin Newsom’s nominee to the Municipal Transportation Agency’s board of directors, came after Stern seemed reluctant to endorse a proposed fee for downtown business owners.

Public transportation can be only so efficient before more moneys are needed to keep it running at a high standard, said Peskin. For example, the F-line streetcar, which serves Market and Embarcadero streets, is routinely packed with both commuters and tourists. Often, those waiting to ride it will watch two or three F’s go by before they can board one.

“We don’t’ have enough operators, and we don’t have enough trains, and it’s over-subscribed,” said Peskin, who pointed out that even in summertime, when electric trolleys sometimes run down the F’s route in order to carry some of the weight, the streetcar still does not run as smoothly as it ought.

If Muni is going to function in the way San Franciscans want it to function, increased funds for improvements are going to have to come from somewhere, Peskin said. Speaking to the idea of a fee or tax as a possible solution, Peskin asked Stern if he would support such a notion.

While the nominee said he could see himself supporting a tax or fee, he would consider doing so only if the MTA was “unable to come up with satisfactory revenue streams through proposed additional lines of service.”

If the MTA found that the new lines were not producing the necessary revenue then it would have to explore such options as fees and taxes, said Stern.

It was then that Peskin pointed out that not one municipal transportation system has a fare-box recovery rate that pays for its service. Stern agreed, noting that the recovery rate is approximately 25 percent.

“So even if you could improve that to one third, the reality is that two thirds has to come from somewhere else,” said Peskin. “Could you support a transit impact operating fee if you knew that over 70 percent of Muni’s infrastructure was designed to go to, from or through the downtown core?”

The fee to which Peskin referred is one that he, with the help of City Attorney Dennis Herrera, currently is researching. According to Peskin, it would be an operating fee paid by downtown employers who benefit from the delivery of their employees to them.

Despite Peskin’s expressed confidence that the fee would not be subject to 218, an initiative approved by voters in 1996 that allows taxpayers the right to approve or reject local governments’ tax increases and limits fees and charges to the costs of services provided, Stern still did not warm to the idea. If nominated, Stern admitted he would view such a fee as one of only a variety of solutions.

Yet Peskin insisted that “If we really want to have that Tokyo or New York City system, if we want the Third Street light rail and the Central Subway, the only way that works is if you have the vision to support the money unequivocally,” sad Peskin. “Absolutely we gotta have downtown pay their fare share to deliver folks down there.”

At the committee meeting, when he explained why he did not support Stern’s nomination, Peskin said that one can not be fearful of standing up for a Muni tax. Supervisor Ross Mirkarimi also expressed concerns about Stern’s fit with the MTA, and so the candidate’s nomination was forwarded without recommendation to the full Board of Supervisors. The board voted 7 to 4 against Stern’s appointment the following Tuesday.

When asked when the MTA has to present their next nominee, Peskin told Beyond Chron that there is no time limit and he does not know if they currently have anyone in mind. Meanwhile, the president of the Board of Supervisors said that working to get a fee for downtown employers will be a priority of his during the next fiscal year.