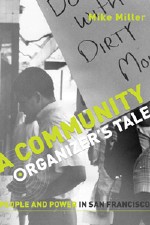 When I moved to San Francisco’s Mission neighborhood in 1979, its predominately Latino residents appeared largely unorganized, if not disenfranchised. I asked a longtime Latino activist if my sense was correct, and he replied, “We haven’t had a real grassroots peoples organizations since the MCO (i.e. Mission Community Organization).” This was the first I’d heard of the MCO, and would often hear the activist’s comments echoed by others. Now, Mike Miller, who was staff director of MCO during its 1969-71 heyday, has written A Community Organizer’s Tale, a book that chronicles MCO’s success, and its all too soon demise. Miller raises important questions about the impact of nonprofits on community advocacy, the role of public money in stifling dissent, and the challenge of maintaining a broad-based “peoples” organization when the “people” it seeks to represent have profoundly conflicting interests.

Mike Miller is a legend in community organizing circles, and for years word has spread that he was working on a book about the MCO. It has finally emerged nearly four decades after Miller’s leaving the organization, but he kept contemporaneous notes and the final product may have benefited from the perspective he gained from the passage of time.

People Power in the Mission

MCO’s founding convention was held on October 4, 1968. It included 800 delegates from 66 organizations, reflecting the group’s goal of including each and every of the Mission’s diverse constituency groups. MCO was among the many groups of the times inspired by Saul Alinsky, which meant that church groups and labor unions played key roles.

MCO’s founding coincided with the implementation of the federal Model Cities program. Model Cities would inject millions of dollars into San Francisco, and MCO would play a leading role in deciding where these funds were spent. Joe Alioto was San Francisco’s Mayor at the time, and as part of his effort to secure MCO’s support, he largely delegated decision-making around Model Cities to the now powerful Mission organization.

Miller spends considerable pages discussing how MCO addressed Model Cities, because it sparked an internal conflict that some felt led to the group’s demise. On the one hand, Miller and others thought the federal money should go to existing institutions, whose work program would be shaped – if not entirely decided – by MCO.

But a competing faction felt that Model Cities funds should go to independent nonprofit organizations. They saw this as ensuring “community control,” and felt that allowing existing institutions to get the funds would lead to “downtown” taking over the Mission.

The latter faction prevailed. This would transform the federal program into a jobs program for local activists, while creating power bases independent of MCO.

Miller quotes Rich Sorro, leader of the Mission Hiring Hall and a key MCO leader, on how Model Cities impacted the organization:

“The Mission Coalition fell apart over Model Cities. People were fighting for titles, positions on board of directors and administrative jobs in the funded agencies … You had a whole pack of neighborhood people carrying briefcases around. This was the fundamental cause of the weakening, and later breakup of the MCO. People got divided up into different agencies that were getting Model Cities money. And it wasn’t all that much money to begin with.”

By the summer of 1970, internal conflicts among key MCO leaders threatened the group’s future. Miller left as staff director in 1971, and MCO’s last convention was in 1973. The Mission would never again have a “people power” mass organization – one that, as Miller repeatedly emphasizes, organized “everybody.”

How did an organization that began with such promise, and which Miller describes as the City’s single most powerful community organization, dissolve after such a brief tenure? True, as Miller, Sorro and others note, the rise of individual nonprofits led to a model of patronage that worked against the MCO’s efforts to empower its members.

But there was a structural problem with MCO that Miller largely overlooks, and which explains why it has not been replicated in the Mission in the past four decades. The fact is that “the people” of the Mission have conflicting interests that prevents their harmonious membership in a single organization.

For example, in the 1971 mayoral election, MCO strongly backed Mayor Alioto against the liberal Jack Morrison. The ILWU, Laborers Union and other labor unions were strong backers of Alioto’s pro-development policies, yet by the mid-1970’s neighborhood activists across the city were organizing to slow what the Bay Guardian historically labeled the “Manhattanization” of San Francisco.

Had MCO not fallen apart over Model Cities, the group likely would have broken up over development policy. Or even more likely, as rising rents in the mid to late 1970’s sparked calls for rent control, MCO could not have survived internal conflicts between its landlord and tenant members.

While Miller sees the absence of a mass organization as limiting the Mission’s capacity to avoid gentrification, one could argue that “people power” has long existed in the community in a different form. This form is the Mission’s impact on city elections, as the neighborhood’s strong voting support for a series of tenant protection measures – from reducing annual rent hikes to expanding rent control in small buildings to strengthening code enforcement to boosting eviction protections – has protected the vast majority of Mission tenants from displacement.

Further, strong Mission District support for Art Agnos in the 1987 mayoral campaign paved the way for new laws protecting the community’s single room occupancy hotels (SRO’s), and for transforming city homeless policy from one night stands in SRO’s to permanent housing in the Mission and elsewhere. And for all the controversy over new development in the neighborhood, high-rise buildings remain barred in the Mission under zoning laws, and commercial development is still prohibited in much of the community.

Ultimately, Miller’s focus is less on the Mission’s history since the late 1960’s and more on the tough strategic questions about organizing and building grassroots power. These questions are strikingly relevant today, and activists will benefit greatly from discussing issues Miller raises and applying them to their own campaigns and organizations.

Everyone interested in the history of San Francisco politics should thank Mike Miller for telling the long overdue story of one of the city’s great community organizations. And those outside San Francisco will likely see parallels between the MCO and their other groups, as maintaining “people power” organizations remains as difficult today as during the MCO’s heyday.