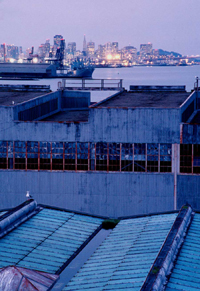 The San Francisco Redevelopment Agency’s plan to take over more than 1,300 acres in the Bayview Hunters Point neighborhood is the opening salvo in the final struggle for the soul of San Francisco. Combined with the 500 acres of the Hunters Point Naval Shipyard that are currently undergoing redevelopment by the Florida-based Lennar Corporation, close to three-quarters of the Bayview Hunters Point area may soon come under the control of the City’s Redevelopment Agency. Although there has been much talk about making the process of urban renewal as inclusive as possible in order to benefit local residents, the fact is that more rather than fewer Bayview residents will likely be lost to the forces of economic dislocation and gentrification. This has significant repercussions for the political and economic future of San Francisco, for, aside from being one of the City’s poorest communities, the Bayview Hunters Point neighborhood represents the last significant concentration of African Americans west of the Bay Bridge.

Equally significant is the fact that the impending displacement of Bayview residents from San Francisco seems to be occurring in concert with similar events in other states and against the backdrop of record high foreclosure rates among African American homeowners nationwide. In New Orleans, demolition crews are tearing down 120 homes in three low-income districts including the Ninth Ward. In Southern California, urban farmers from South Central Los Angeles’s African American community are fighting eviction from land that City Hall has designated for commercial real estate development. Seen within the context of housing and lending policies that have historically discriminated against non-white households, these developments indicate that a methodical movement is underway to inaugurate a new era of segregation in the United States, one in which differences in economic class and income function as a stand-in for race.

The Seduction of Gavin Newsom

In the summer of 2005 San Francisco Mayor Gavin Newsom attended the 73rd annual meeting of the U.S. Conference of Mayors in Chicago. After returning from the convention, Newsom said that he was so impressed by the cleanliness and design of Chicago’s downtown area that he was inspired to improve San Francisco’s own livability quotient by applying some of the same strategies used in the Windy City. To that end, Newsom declared in his 2005 State of the City address at San Francisco State University his intention to place increased emphasis on architecture and urban design, tree planting, public art installations, and street sweeping and maintenance. He also announced plans to green the urban canopy of San Francisco by planting 100,000 trees over the next two decades, and he singled out Bayview Hunters Point for the placement of surveillance cameras that would help police monitor high crime areas, linking economic development and job creation with safe streets.

Admittedly, Chicago’s impressive architectural achievements, open lakefront, and modern downtown belie the city’s enduring image as a large, dilapidated, industrial center. Indeed, on display at the annual meeting of the U.S. Conference of Mayors was not only information related to best practices for green building and policing in the Windy City and beyond but also Chicago’s glistening downtown district. From the string of upscale shops along the Magnificent Mile to the greenswards of Millennium Park and the tourist friendly confines of Navy Pier, visitors to downtown Chicago were treated to wide, tree-lined boulevards, an abundance of landscaped parks, interesting architectural designs, numerous public art installations, magnificent lakefront vistas, and an area generally scrubbed clean of dirt and homeless people.

Newsom is not the first public official to be seduced by this appealing picture. After visiting downtown Chicago in 1996, Pittsburgh Mayor Tom Murphy decided to use the power of eminent domain to demolish 60 buildings and condemn 125 mostly locally owned businesses occupying several blocks along the Fifth and Forbes corridor in downtown Pittsburgh in order to build a multi-level retail mall containing many of the same upscale shops as the Magnificent Mile. Murphy even pegged Chicago-based Urban Retail Properties to manage the area’s redevelopment.

Through local organizing efforts, a coalition of small business owners, historical preservationists, and supporters of immigrant and African American rights eventually forced Murphy to abandon this project. Their concerns were buttressed by research compiled by the Institute for Local Self-Reliance which showed that roughly two-thirds of the revenue generated by chain stores and franchise operations like McDonald’s routinely leaves the local economy and the metropolitan area altogether. In fact, a 2004 report entitled The Andersonville Study of Retail Economics demonstrated that, contrary to conventional wisdom, locally owned, independent businesses generate 70 percent more revenue for the local economy per square foot than national chains.

While Tom Murphy decided to forego a fourth mayoral run in 2004 in favor of employment with a real estate and development think tank called the Urban Land Institute, plans for the redevelopment of the Fifth and Forbes corridor continue to abound. Most recently, PNC Financial Services Group offered to sink $170 million into a new project to revitalize the area. The investment, however, is contingent upon the receipt of $30 million in public subsidies from the Pennsylvania state government and $18 million in tax breaks from the city of Pittsburgh, Allegheny County, and the Pittsburgh public school district.

Meanwhile, Murphy’s new job has taken him around the country to various sites designated for urban renewal. In New Orleans, for example, he advocated a “tough love” approach for rebuilding the city, and in a strange echo of the Fifth and Forbes episode business groups in Tampa, Florida, asked Murphy to instruct them on ways to bring upscale shops and condominiums to their downtown area. Murphy’s travels have even brought him into the orbit of San Francisco Mayor Gavin Newsom. At a March 30, 2005, conference at New York’s New School for Management and Urban Policy, Murphy appeared alongside Newsom, Kansas City Mayor Kay Barnes, and Richmond, Virginia, Mayor L. Douglas Wilder to speak about “the characteristics of successful leadership needed to implement creative urban policies.”

Newsom’s current enthusiasm for redeveloping the Bayview is unlikely to have sprung from his meeting of Murphy, but it is clear that both men were inspired by their experiences in Chicago. Logically, then, if Newsom intends to inaugurate a renaissance of green building design and economic development in San Francisco by following Chicago’s example, he would do well to acquaint himself with both the triumphs and the tragedies of urban renewal in the Windy City.

The triumphs include the planting of 500,000 trees in the last 15 years and the implementation of public programs to clean, beautify, and rehabilitate city streets through landscaping and gardening. These efforts have considerably enhanced Chicago’s urban landscape, and Newsom is correct to believe that San Francisco can take a cue from the Windy City in this area.

Equally important as tree planting in Chicago, though, is the presence of several municipal ordinances that mandate the existence of public walkways along the Chicago River and Lake Michigan. These regulations have successfully reserved a significant amount of open space for public use and offset the deleterious effects of a downtown area dominated by skyscrapers.

San Francisco would likely derive comparable benefits from similar protections, especially in areas that abut San Francisco Bay. The lack of an ordinance promoting bayside access in such places as Mission Bay, for example, has resulted in a claustrophobic cluster of construction projects that extend right up to the edge of the water. It appears that citizens intent on drinking in bay vistas here will only be able to do so by (1) buying a condo, (2) purchasing a ticket to a Giants’ game, or (3) finding employment in an appropriately situated China Basin office building.

Any discussion of planning and development in Chicago, however, must necessarily include a conversation about the systematic institution of virulently discriminatory housing policies and development practices that were purposely designed to displace Chicago’s urban poor, schemes that Newsom should scrupulously avoid if he is truly intent on creating an environmentally sustainable San Francisco for all.