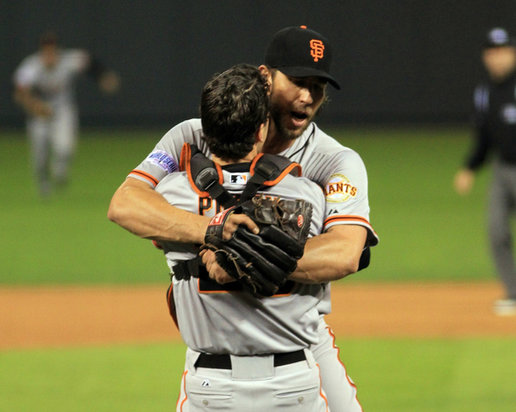 Today’s parade down Market Street honors the most surprising SF Giants team of the three recent World Series winners. Many teams claim that “nobody believed in us but ourselves,” but in the Giants case it was true.

How does a pitching staff with Jake Peavy as the second starter win the World Series? How do the Giants win the Series without Pablo Sandoval or Buster Posey hitting a single homerun in the playoffs?

One is hard-pressed to think of another World Series winner with as weak a starting rotation and run scoring ability as the 2014 Giants. To everyone who believes that relief pitching and defense are the keys to winning, the Giants just proved the point.

Posey, Affeldt, and Bochy were more emotional after this World Series win because  they recognized the team’s limitations. Only in World Series experience were the 2014 Giants equal to the 2010 and 2012 versions.

The 2010 team had Lincecum and Cain at their best in addition to Bumgarner. In hindsight, that team was better than we thought. The 2012 Giants were good enough to sweep a Detroit Tigers team with “unbeatable” Justin Verlander; Panda took care of him in game one and the Tigers never recovered. The 2012 Tigers were far superior to the 2014 Royals that took the Giants to 7 games.

Some say the Giants are not a dynasty because they didn’t make the playoffs in 2011 and 2013. But the Giants may well have won another World Series in 2011 had Posey not been lost in June with a season ending injury (the home plate collision). And who knows where the Giants might have gone last year had Pagan and Scutaro not missed much of the year with injuries.

“Dynasty” connotes the Celtics, Yankees, and Bulls teams that started the season as title favorites and then won. But the Giants have come closest to a National League dynasty than any team since the Big Red Machine of 1970-72-75-76, which won back to back World Series in its last two years.

If Matt Cain had been healthy, would the Royals have taken the Giants to 7 games? I doubt it. And Cain will be healthy next year. Tim Lincecum says he’s going to go back to working on his delivery with his father, which at least offers a chance for a possible comeback.

The Giants could easily be stronger next year. We could lose Pablo, but when Brian Sabean spoke of Sandoval as one of our “core” players during the trophy ceremony, a bell went off.  Sabean always keeps his core players. Now that Pablo is in that group, a deal to keep him here should get done.

For longtime fans who have been blessed with three titles in five years, I predict next year will be more relaxing. The Giants won three World Series in five years. Their legacy is secure. Bruce Bochy is a surefire Hall of Famer. Madison Bumgarner showed that he, not Clayton Kershaw, is the elite left handed pitcher of his time.

The Giants have finally convinced the East Coasst media that they have done something special. They sit atop of the baseball world, and today’s parade on Halloween should be aMaysing.