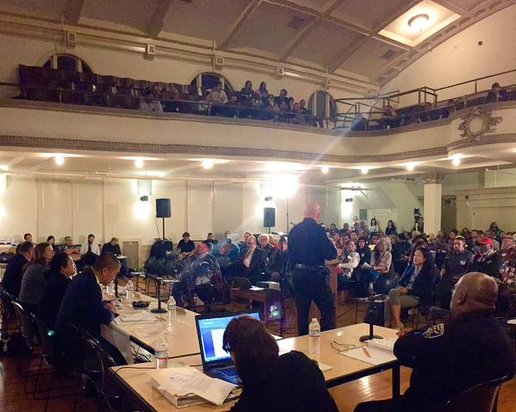 Over 300 Tenderloin residents and workers came to the Kelly Cullen Center on January 28 to send a powerful message from a neighborhood fed up with crime. Most urged the Police Commission to reject a proposed redistricting plan that breaks the Tenderloin into three police districts while expanding Tenderloin station to as far away as Market and 3rd Streets.

The crowd filled the Kelly Cullen’s Center second floor and took up much of the balcony above. The Central City SRO Collaborative (CCSROC) submitted over 400 letters from residents, merchants and building owners opposed to the SFPD plan and favoring a CCSROC alternative that keeps all of the historic Tenderloin in the new Tenderloin police district.

SRO tenants spoke to the current boundary problems that SFPD’s proposal cutting off the Tenderloin station at Larkin Street fails to address. David Elliott Lewis, who lives in CHP’s Iroqouis Hotel on O’Farrell between Polk and Larkin, described how drug dealers bring violence to his home because Larkin is currently not in Tenderloin station (Larkin is now in Northern).

He explained that for the shift to include Larkin in the Tenderloin district to have the most impact, the adjacent block west of Larkin must also be included. Lewis reported three homicides since he has moved into the Iroquois, and reminded all of the ongoing drug dealing problem on Larkin.

Tenants from the Elk Hotel and Hartland Hotel also find themselves just outside the Tenderloin boundary. They testified that it made no sense to take blocks of the Tenderloin out of the district station while adding the Westfield shopping Centre, which is far removed from the Tenderloin neighborhood.

Shoplifting at Westfield has been so rampant that the police have even considered installing a substation at the mall. Brenda Washington of the Jefferson Hotel and other Tenderloin residents told the Commission that they feared police would prioritize Westfield shoplifting over crime and violence in the heart of the Tenderloin. This is a logical inference in light of the major tax revenue the mall provides San Francisco.

The supporters of SFPD’s plan claim that having a politically powerful force like Westfield in the district will bring more resources to Tenderloin station; yet Macy’s and Neiman Marcus have been in Tenderloin station for years and neither has pushed the city for more police along Leavenworth Street.

Tenderloin residents are asking SFPD to create a police district accountable to them, not shopping mall owners. At a time when many low-income communities across the nation are angry at the police, the Tenderloin is asking SFPD to work more closely with the neighborhood.

A number of moms affliliated with La Voz Latina described having to walk their children past violence and drug dealing. La Voz mothers have led the effort to “take back” Sgt. Macaulay Park from nearby drug dealers on Larkin Street. They are now urging the Police Commission to do its part by including the entire area around the park in the nearby Tenderloin station.

David Knego, Executive Director  of the Curry Senior Center, spoke about the difficulties seniors faced having to walk through a gauntlet of drug dealers at the southwest corner of Leavenworth and Turk.  Since a recent shooting in the corner smoke shop, children no longer pass by the corner.

D6 Supervisor Jane Kim spoke at the hearing, and praised Chief Suhr for his commitment to the neighborhood. Kim said she had not taken a position on the question of district boundaries.

That over 300 people came out for an evening meeting on one of the Tenderloin’s highest crime blocks sent a powerful message: the Tenderloin is fed up with violence, street drug dealing and slow response time due to a lack of overall Tenderloin police staffing.

Will the Police Commission and Chief Suhr be impacted by the public outpouring? Considering that the proposal is a draft for public review, ignoring concerns from Tenderloin stakeholders would mock the public hearing process.

I don’t think that will happen. I think the Commission and Chief Suhr will want to send a message of appreciation to those who turned out Wednesday night. I think they want to make sure that residents of one of the few low-income neighborhoods remaining in San Francisco know that their input on police policy is valued.

At the conclusion of the hearing, a number of Commissioners described the meeting as a valuable and truly dynamic event. They and Chief Suhr listened intently and appeared genuinely interested in what they heard.

The days where the Tenderloin grumbled privately over unacceptable crime and violence levels are over. A page in the neighborhood’s history book has been turned, and there is no going back.

Here is the current list of businesses/organizations supporting the alternative CCSROC Redistricting Plan:

Randy Shaw is Editor of Beyond Chron. His book, The Tenderloin: Sex, Crime and Resistance in the Heart of San Francisco, will be out this spring.