Outwitting History: The Amazing Adventures of a Man Who Rescued a Million Yiddish Books, by Aaron Lansky 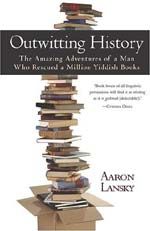 This well-written, fast-paced book is both the history of the National Yiddish Book Center and the memoir of 50-year-old Aaron Lansky who founded the Center 25 years ago. On the surface – as the subtitle indicates – the book is about Lansky’s “amazing adventures” over the past twenty-five years rescuing Yiddish books around the globe from dusty attics, moldy basements, and sodden dumpsters. While these adventures make for an interesting read, the book offers readers a lot more – even to readers who don’t know a knaidlach from a knish, or shmates from shpilkes.

Yiddish as a language of social justice is central to both the book and to Lansky’s motivation over the past 25 years. In summaries of his favorite Yiddish stories sprinkled throughout, and in his loving yet candid descriptions of the dying generation of Jews who entrusted him with their Yiddish collections both large and small, Lansky paints Yiddish as the language of the people — the workers, the socialists, the thinkers of both the old country and an earlier America. (Before World War II, Lansky estimates that 11 million people spoke Yiddish; 50% of them were killed in the Holocaust.).

The book describes public libraries in America’s dying urban centers, including Philip Roth’s Newark, New Jersey, and mill towns such as Lowell, Massachusetts that at one point had large Yiddish collections. By exposing the long forgotten volumes on these library shelves, Lansky shines a bright light not just on the books in those libraries, but also on the people who read them and the more progressive times in which they lived.

The idea that one person — and one non-profit — can make a difference in the world is an unspoken theme of the book. The idea to save Yiddish literature from the dustbin of history – and the literal dustbins of the modern world — came to Lansky while a graduate student in Canada. Unable to find the books he and his classmates needed, Lansky decided to take time off from his studies to see if he could find the books that he knew must be out there. The rest, as they say, is history. While acknowledging people along the way who helped the effort, and despite appearing throughout the book as a genuinely nice guy who’s ego appears to be quite in check, there’s no doubt that the Book Center – touted on its website as the “largest and fastest-growing Jewish cultural organization in America” came into existence as a result of Lansky’s personal vision, skill, hard work and dedication.

Some of those skills were honed during Lansky’s undergraduate years at Hampshire College in Amherst, Massachusetts. Although a small part of the story, the description of this part of his education underscores the importance, excitement and unlimited possibilities of a true liberal education.

Lansky became interested in Jewish history during a freshman course taught by a cultural anthropologist. Because Hampshire had no set requirements and allowed students to design their own curriculum, he was able both to study independently with the course professor over several semesters, and to find a professor at a nearby school to teach him Yiddish. With today’s emphasis on standardized testing, core subject requirements and the value of a “practical [read “business school”] education, how many young people have the opportunity to devise a course of study that may lead to uncharted territory the way Lansky’s years at Hampshire College did?

Lansky’s National Yiddish Book Center now has 30,000 members, an innovative building complex in Massachusetts, a 2.5 million dollar budget and a staff of 20. It has grown beyond its initial mission of rescuing books, and has established Yiddish libraries around the world (including two in China), has digitized its entire collection (with the help of Steve Spielberg’s foundation), has begun to translate books, and offers a full calendar of innovative programs.

While detailing these accomplishments, the book does not overly glorify the hard work and disappointments along the way. Many of the early adventures remind us that most success stories do not spring forth wholly formed, and that results take time.

Among the hurdles that Lansky faced, many, surprisingly, came from the Jewish community itself. Lansky is polite, yet candid, in describing how his ideas were shunned by both traditional Jewish charitable organizations on the grounds that Yiddish was dead, and by Orthodox Jews who thought that Yiddish (non-religious) literature was blasphemy. The story of the Orthodox book dealer, hoarding a locked attic full of dusty Yiddish books and refusing to sell any to Lansky, is exemplary of the many parts of this book that could stand alone as interesting short stores.

In the United States in the 1970’s Lansky explains, it was acceptable to see Judaism as a religion, and Jews as victims of the Holocaust in need of a state, but not Jews as a people with a unique culture. He had better luck with early fundraising in Canada, where being Jewish was seen in a broader context.

Unable to raise funds from establishment sources, Lansky went to the people, a fitting approach for someone trying to save a people’s literature. Lansky relates how someone once commented to his father that while most Jewish kids who needed money asked their parents, Aaron Lansky needed money and decided to ask every Jew in America. The strategy certainly appears to have worked. The website for the National Yiddish Book Center is: http://www.nationalyiddishbookcenter.org/


Comments may be sent to lfeingold@earthlink.net