Out of Public Limelight, U.S.War on Immigrants Intensifies 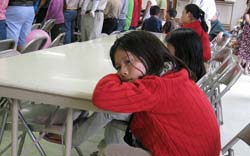 In the past month, the netroots and much of the political left has been outraged by congressional passage of a new Foreign Intelligence Surveillance Act (FISA). Critics claim the bill opens the door to wiretapping and other privacy invasions, endangering our civil liberties. But while concerns are raised over FISA, or waterboarding and torture at Guantanamo, massive violations of the human rights of working immigrants in the United States are ongoing. In fact, for much of 2008, the Immigration and Customs Enforcement Agency (ICE) has systematically terrorized undocumented immigrants to a degree that would prompt national outcry if these same acts were occurring in other nations. Hard-working immigrants are being rounded up like cattle and subjected to mass arrests, and a woman nine months pregnant, stopped for a traffic violation, was taken into custody and then handcuffed to her bed while giving birth. Politicians and activists have put FISA and Guantanamo on the national radar, but where is the national outcry necessary to end this systematic brutality against immigrant families?

While Democrats were focused on the Obama-Clinton race, the Bush Administration proceeded with the most brutal attacks on immigrant workers that this nation has seen in several decades. And either because these attacks have primarily been carried out in small towns like Postville, Iowa or outside major media markets, most remain unaware that these events have even occurred.

To its credit, the New York Times has publicized many of these attacks, including the account of the Postville outrage by Professor Erik Camayd-Freixas. This is the courageous man who brought to light how nearly 400 immigrant workers were shackled and brought to the National Cattle Congress in Waterloo, Iowa so that they could be given Bush-style justice before being deported.

Despite the Times coverage, and the widespread dissemination on the Internet of Camayd-Freixas’ first-hand account of what he saw in Postville, the outrage failed to become an ongoing news story. ICE’s brutal mistreatment of hard-working immigrants has not been the topic of Sunday talk shows, has not become an issue in the presidential race, has got nowhere near the attention of FISA among bloggers, and is likely little known to most voters to this day.

Nor has the public heard much, outside the Times, about the traffic stop of a pregnant Mexican woman in a Nashville suburb that resulted in her being kept in custody for six days and then giving birth while handcuffed to her bed. She was kept from her infant for two days and then barred from taking a breast pump into the jail.

Nashville authorities, including Mayor Karl Dean, commend such efforts to crackdown on undocumented immigrants. They say that the woman, Juana Villegas, was not treated differently because of her race or immigration status.

The United States of America thus endorses putting a woman in jail for six days for the “crime” of driving without a license, and then cuffing her to a bed while she is giving birth. And unlike those at Guantanamo, nobody is claiming that the woman was a “terrorist” or “enemy combatant.”

Recall how a public relations firm planted the false story that Iraqi troops were removing incubators used by babies in Kuwaiti hospitals. This invented horror story dominated the media and built support for the U.S. to wage war to oust Iraq from Kuwait during the first Bush Administration.

Ms. Villegas’ horror story, however, is real. And if we heard that Iran was engaging in such treatment against Christian women giving birth, the Bush Administration and pundits would be insisting that we invade Iran immediately to prevent such human rights abuses.

The media has put immigrant issues on the back burner since the Texas Democratic primary in March. The only ongoing national media coverage of immigration is from Lou Dobbs, which is like giving Pat Robertson a media monopoly on coverage of abortion rights.

None of the regular pundits on CNN or MSNBC’s political shows have a background in immigrant rights issues, and the only Latino regulars on the former show (the latter has no Latino pundits) are Republicans.

But the underlying reason for the lack of media coverage—-a void that results in politicians not being forced to discuss the issue—is that these stories put the United States in a shameful light.

And the media, ever fearful of appearing “un-American,” will not run ongoing stories of the continuing human rights abuses that our government is perpetuating against Latino immigrants.

Democrats, afraid of appearing “weak” on border control, also have avoided making the ICE outrages a front-burner issue. Barack Obama has remained steadfast in support of legalizing the twelve million undocumented immigrants and has criticized ICE raids, but the Democratic Party does not want the November elections to center on the propriety of ICE enforcement tactics.

These ongoing war on immigrants explains why Obama already has nearly a forty point lead on McCain among Latinos, and why he and fellow Democrats will likely get an historic 70% of the Latino vote in November. It does not make it any better for the immigrant victims of ICE harassment, but voters will get payback at the polls.

Only then will the United States have a government that supports the millions of undocumented immigrants who are an asset to communities, and upon whose labor the nation’s economy depends.