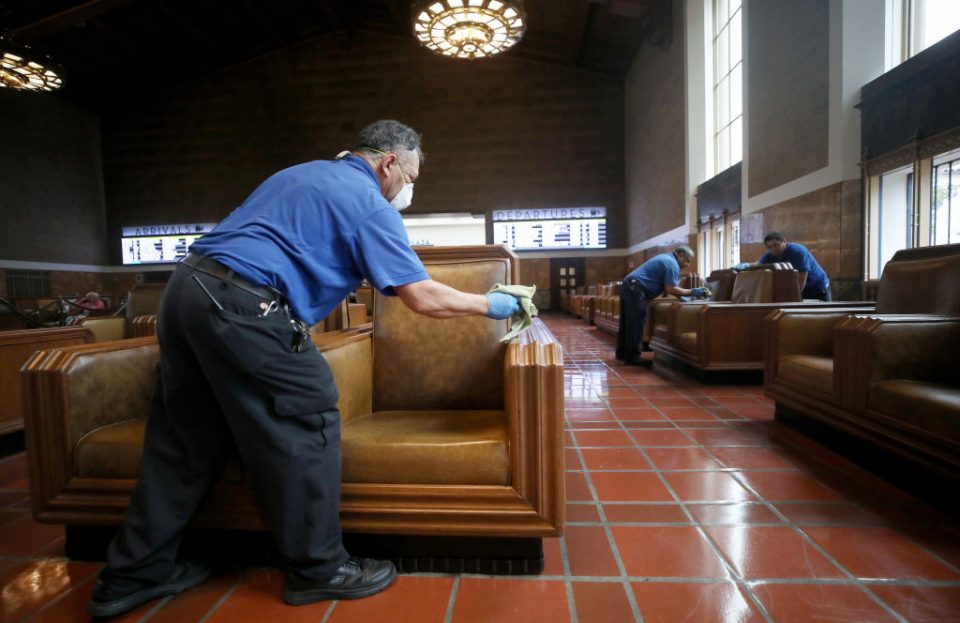 LOS ANGELES, CALIFORNIA - MARCH 13: Seats in a waiting area are cleaned by custodial staff at Union Station on March 13, 2020 in Los Angeles, California. L.A. Metro custodial staff have enhanced cleaning efforts at major transit hubs in response to COVID-19. There have been no known incidences involving the spread of coronavirus on public transit in Los Angeles County. (Photo by Mario Tama/Getty Images)

What is the connection between a lack of commitment to collective well-being and social disaster in a time of crisis?

I don’t know if I have had the coronavirus (COVID-19). What I do know is that I developed pneumonia two weeks after returning to Los Angeles in early February from a visit with my wife’s family in Northern Italy.

I started feeling ill on a Friday — aches, chills and overall weakness. By Monday I was coughing. On Wednesday I was in urgent care – four days after reports that Northern Italy was experiencing a major outbreak of COVID-19. After an X-ray determined that I had pneumonia, I asked the attending doctor about being tested for COVID-19. She told me that it was “too expensive” to test everyone.

Why has it been so difficult for our government to give straight answers about the threat of COVID-19?

The next day my primary doctor informed me that the expense of testing was not the problem, but there was a more fundamental issue. As of late February, there were only 100 testing kits in Los Angeles County, he said. Because I didn’t have a severe fever and I had not traveled to China, I did not meet the Centers for Disease Control (CDC) guidelines for testing. He added that if he sent in a test sample it would be thrown away.

During the ensuing weeks the world changed. Italy’s death toll from COVID-19 has passed 1,800 and the country is on lockdown. President Trump has gone from calling the spread of the virus a “hoax” conjured up by devious Democrats to banning travel from Europe and declaring a national emergency. The CDC guidelines for testing seem to change daily, and promises of abundant testing kits offer belated and often false hope.

When I talk to my family and friends the first question they ask is, “Have you been tested?” When I respond, “It’s complicated,” their reaction is mostly anger and incomprehension. My emotions are the same. When Italy’s COVID-19 cases expanded exponentially, I once more requested a test and was again turned away by the CDC and for the same reasons.

Conservatives who once said “government is the problem, not the solution” are now demanding the government act more forcefully.

I was treated with antibiotics for two weeks and the pneumonia disappeared. I’m one of the lucky ones—healthy of body with none of the “underlying” health conditions that have led to death for so many. I can only conclude that my experience of frustration, confusion and fear for my family is minor compared to the thousands of others who do not have the resources I have, including health insurance. Imagine people who are living on the streets or who have symptoms but are going untested and untreated for any number of other reasons.

Meanwhile, our president talks of how plummeting gasoline prices will be like a major “tax cut” due to the collapse of the oil market.

During my self-quarantine at home I took time to read and think about what our country and the world is going through. I started reading Thomas Mann’s The Magic Mountain, which is about a group of people in a sanatorium in Davos, Switzerland, on the eve of World War I. It’s the perfect book for people living what the main character, Hans Castorp, calls “horizontal lives,” wrapped in blankets and enduring the daily rituals of medical examinations.

The sanatorium residents suffer, Mann suggests, from a spiritual and moral “palsy” that evolves into physical ailments. Some seem seduced by the “attractions” of illness – its inwardness and self-obsession, characteristics of late 19th century bourgeois decadence. Referring to the culture and politics of pre-war Europe – Mann began the novel before World War I but finished it afterwards – the democratic socialist Michael Harrington once observed that Mann’s patients were “sickened by history.”

Americans are beginning to ask some fundamental questions about our society that might puncture our image as “the greatest country in the world.”

Great literature poses great questions. If it is history and our politics that are making us sick, it is neither noble nor reasonable to believe that individuals fighting alone, like Hans Castorp, are the solution to what is a social problem.

As I was forced to deal with the barriers to my own health, it was apparent that COVID-19 is as much a “structural,” political and economic problem as it is a battle to obtain an individual test. Millions are realizing the same thing. People all over America are beginning to ask some fundamental questions about our society that might puncture our self-flattering image as “the greatest country in the world.”

Why is South Korea capable of quickly establishing a testing regime where tens of thousands are examined daily (and are even given a “drive through” option) without our excessive restrictions? Why does Germany have a system of regional testing laboratories that have saved lives due to quick and comprehensive testing for COVID-19? Why has it been so difficult for our government to give straight answers about the threat of COVID-19, and how could we be so monumentally incompetent in providing adequate access to testing? What is the connection between a lack of commitment to collective well-being and social disaster in a time of crisis?

Most important, how did we arrive at this situation? If our society is in some fundamental way sick, do we need a Thomas Mann to explore the depths and complexities of that disease?

The literary questions are interesting and offer an occasion for musing. But their answers can only be found through politics. That is why people should be asking every candidate during this election season what their approach to the expansion of health care is. Even conservatives, who may have embraced the idea that “government is the problem not the solution,” are now demanding the government act more forcefully. These are, and always have been, questions of life and death.

I have no doubt that the doctors, nurses and staff that I came in contact with were working their hardest to provide the best care they could under trying circumstances. And these workers on the front lines are risking infection every day. In my communications with my doctor, he is asking the same questions I’m asking and expressing the same frustrations.

The best way to fight an individual illness is through a community of friends and family, and a robust health care system.   The same is true of a political fight.   We can’t afford to stay “quarantined” in our homes from the political struggles ahead.  Eventually our public spaces will again be ours to strengthen.