Only Some Deaths Matter To Press, City officials 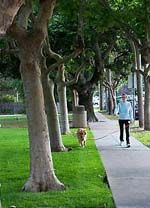 While death by four legs gets big ink, death by four wheels rolls beneath the radar. The fact that pedestrian fatalities in San Francisco alone outnumber the entire country’s annual dog attack deaths appears nowhere in the local press or governmental actions that have followed recent incidents.

Typically, drivers who kill pedestrians in San Francisco are not even cited. As long as you’re not drunk or fleeing, the driver is considered just another victim, who must feel really bad. The pedestrian, of course, feels really dead, but it’s a continuum. All a driver has to say in most cases is “the sun was in my eyes.” Incredibly, in a South San Francisco killing that took place at night, police said that glare from streetlights on wet pavement blinded the driver, so no one was at fault.

Beyond the mystery of why these blinded drivers always kill someone else and not themselves lies a larger mystery: Why does no one care? No columns by Chronicle writers follow these deaths, no special mayoral task force, no earnest editorials, and no speedy action from the DA and police-usually, no action at all. Victims attacked by dogs are rightly taken seriously. Injured and killed pedestrians are dismissed as tall, wingless pigeons who didn’t flutter out of the way quite fast enough.

Beverly Kees, a journalism professor at San Francisco State, was killed in the crosswalk by a turning truck last December at Harrison and Main. Speakers at a vigil there six months later expressed grief and frustration that no charges had been pressed. Police standing near the vigil shrugged as cars blocked crosswalks and drivers cursed at Beverly’s friends and neighbors trying to join the group. I doubt police would have stood idly by if raging dogs had threatened a memorial for a mauling victim.

Why do dog attacks provoke a frenzy of attention, while the deaths of grandmothers, children, and coworkers-guilty of nothing but walking to work or school-meet with indifference? Perhaps maulings seem particularly gruesome. Being attacked by a dog must be terrifying, but maulings have no corner on horror and suffering.

When four-year-old Elizabeth Dominguez was killed on the sidewalk at 24th and Potrero in 2003, frantic witnesses clawed the Muni truck that had crushed her against a pizza parlor. One neighbor who helped, a young man in tears, said that even after they pulled the truck back, “she stayed up there.” Surely, the image of this child embedded in a wall because some driver couldn’t be bothered to stop at the light is nightmarish enough to spark interest. Neighbors had campaigned fruitlessly for years to calm the intersection where Elizabeth was killed. Supervisor Ammiano called a special town hall meeting, but no mayoral task force followed her death.

The very pervasiveness of the threat posed by cars in the city paralyzes us. Where to begin? When so many people drive, we become complicit and see only the obvious self-interest of speed and convenience and not the larger self-interest of being able to walk around in one piece. Any push for traffic calming starts the hornets buzzing about lost parking and adding two minutes to the commute.

Following the money explains the media blackout. Advertising on television and in special newspaper sections creates a wall against criticism of automobile dependence. No publication will bite the hand that feeds it.

Further explaining the lack of coverage is the fact that pedestrians killed by cars disproportionately tend to be poor people of color. The disparity is so remarkable, the World Health Organization dedicated its World Health Day in 2004 to traffic deaths worldwide, stating:

The contrast between the official reaction to recent dog attacks and the nonreaction over the years to pedestrian deaths should cause us to reflect and calmly assess the dangers we face. Dogs have their critics and defenders and so do cars, so let’s compare:
. Dogs may have hot, sticky breath, but it’s not causing global warming.
. Dog poop is disgusting, but it doesn’t block the whole sidewalk and force you to push a stroller in the street.
. No one has died in Iraq to supply the U.S. with dog food.
. No tanker has spilled gallons of kibble and biscuits, spoiling beaches and killing waterfowl and otters.
. Hate radio thrives during “drive time,” not ball-fetch time.
. No car has ever provided therapy at a nursing home or pediatric ward, guided a blind person, or assisted someone with a hearing or other physical disability.

The list is endless. Our primal fear of the wolf has thousands of years’ head start over our modern fear of the all-devouring machine, but it’s time to shift our focus to the real threat.