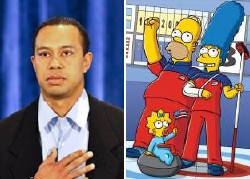 The worldwide recession deepens, the impacts of climate change worsen, and health care costs continue to skyrocket — yet people are primarily discussing other matters. Chief among them is why curling is an Olympic sport, since it is the on-ice equivalent of bocce or shuffleboard, two games that do not require much athletic talent. Others are arguing whether the United States has “stolen” Canada’s Olympic glory, and whether the U.S. defeat of Canada’s hockey team should be compared to the team’s 1980 victory over Russia at Lake Placid. And then we have the nation’s obsession with Tiger Woods. This can be explained simply: the people who run television networks and the larger media world are white men over 40 who play golf, and in their world Tiger is not only a personal hero, but one who brings hundreds of millions of dollars to corporate America.

Curling: No Sport of Kings

After becoming the first U.S. woman skier to win a gold medal in the downhill, Lindsay Vonn said she had worked her whole life to achieve this honor. The skiers, snowboarders, speedskaters and nearly all Winter Olympics competitors are tremendous athletes whose skill level far exceeds that of 99.9% of the population. And then we have those who qualify for the Olympics without any athletic talent. I’m speaking of those in Vancouver participating in curling.

Although I have watched Winter Olympics since the days of Jean Claude Killy, this is the first year that I have seen a curling competition. By now everyone who has turned on the television to watch the Olympics has seen curling, as matches are ongoing, and the pace is far from fast.

I first saw curling during last week’s spirited US-Swiss match, which ultimately went three overtimes. I soon realized that curling was the perfect activity for the millions lacking athletic ability to nonetheless dream of making an Olympic team.

It turns out that I was not alone in reaching this conclusion.

The always prescient Matt Groening of The Simpsons ran an episode in which Homer and Marge Simpson qualify for the U.S. Olympic team in the demonstration sport of “mixed” curling (i.e. curling currently divides teams by gender). When praised for her skill with the broom, Marge replies, “ I once got red wine out of a white rug.”

Of course, Homer and Marge are quite a bit older than standard Olympic athletes. And the athleticism required for curling is further put into doubt when they win the gold medal despite Marge sweeping with one broken arm.

The Olympics have brought U.S. and Canada relations to a peak of rivalry not felt since Michael Moore’s Sicko, which showed Michigan residents driving across the border for much less costly health care. Two issues predominate.

First, anyone following the Olympics has heard how Canada thought they would dominate the medal count, but its Americans who are seizing the podium. The U.S. media’s seeks to enforce U.S. supremacy over its neighbor to the north, effectively saying: “we may not provide our people with health care, but our athletes blow you away on the half-pipe.”

I don’t know why Canadian athletes are not living up to expectations, but I can say with certainty that the comparison between the U.S. hockey victory over Canada on Sunday and America’s gold medal win in 1980 is ridiculously overblown.

The Lake Placid victory occurred during the height of the Cold War, and when the U.S. team was still comprised of amateurs, rather than NHL stars as the Olympics now allow.

It was a game for a medal, rather than a preliminary victory that does not prevent Canada from ultimately winning the gold.

The breathless, over the top excitement expressed about the hockey victory by U.S. sportscasters on Sunday night was jingoism at its worst. Hockey is a sport where a hot goaltender can compensate for an otherwise outmatched team, and that is exactly what happened to a Canada team that outshot the U.S. by a 45-23 margin.

The U.S. team deserved great accolades for its victory, but let’s wait until the gold medal is awarded before hearkening back to Lake Placid.

Why did the nation’s business came to a halt last Friday while Tiger Woods read the speech that his handlers wrote for him?

The answer is that Wood is the greatest in the primary sport played by the wealthy elite that controls major television networks and other media. Woods is their athletic hero, in a way that Kobe Bryant, Peyton Manning, Derek Jeter, or Roger Federer could never be.

Stories of Wood’s affairs quickly evaporated from the major media, as too many corporate interests have a stake in his success. In addition to his many corporate sponsorships and the high ratings he brings to corporate-backed golf telecasts, there is a fact about Woods that is often overlooked: total tour prize money has skyrocketed during the Woods years, increasing at a rate far beyond other sports.

So many people and corporations have a financial interest in Woods getting back out on the course that they cannot allow the media to do to their meal ticket what it did to Britney Spears, Lindsey Lohan, Amy Winehouse and others — namely, to so besiege them with paparazzi that they no longer can undertake the work that made them a celebrity.

I did enjoy Woods’ statement that he had gone astray because of abandoning the teachings of Buddhism. That showed the folks at FOX News who had urged Woods to revive his reputation by turning to Christianity.