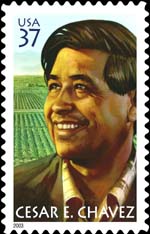 Today is Cesar Chavez Day. When California in 2000 became the first of eight states to declare March 31 as Cesar Chavez Day, the goal was to connect the honor with a curriculum that would educate students about Chavez. Yet fifteen years later, it is clear that young Californians know little about Cesar Chavez, and that those raised outside the West Coast and Southwest know even less.

Millions of Americans even think Barack Obama invented the “Yes We Can” rallying cry, unaware of its roots in the UFW’s “Si Se Puede.”(a listener to a Talk of the Nation show on NPR once told me that host Neal Conan also credited Obama with launching the slogan). One reason schools teach little about Chavez is that he led both a progressive social movement and a labor union – still controversial positions in many states and localities.Another is a reluctance to credit a Latino with greatly impacting the broader society.

I am often asked  what I thought were the three most important facts about Chavez’s legacy. Here’s what I say.

While discussion of Cesar Chavez understandably focuses on such personal actions as his fasts, marches, speeches, he also developed the modern blueprint for national grassroots movements. The UFW was the first nationwide campaign to actively unify students, clergy, women, and workers toward a common goal, and mounted the broadest progressive national grassroots campaign until Barack Obama’s Fall 2008 election effort over three decades later.

And unlike Obama, the UFW did not have hundreds of million of dollars. In fact, the UFW likely spent less in the entire decade leading up to the 1975 enactment of the Agricultural Labor Relations Act than the Obama presidential campaign incurred each week.

Cesar Chavez dared to accomplish what most thought impossible, demonstrating the potential of national grassroots campaigns to win against all odds. Understanding the UFW’s success should cause activists to think bigger about what’s possible.

The most widely touted book on the 1968 Presidential campaign was Joe McGuinness’ The Selling of the President. The book showed how presidential candidates now relied on advertising agencies to sell them like products, with television ads replacing door-to-door canvassing as the way to win over voters.

As the Democratic base including labor unions adopted this non-activist approach to election campaigns, Cesar Chavez and the UFW showed that grassroots electoral outreach still worked best, particularly in getting infrequent low-income and minority voters to the polls.

In 1968, the UFW swarmed Latino neighborhoods on behalf of Robert Kennedy’s presidential primary campaign, and were credited for bringing victory for the close Chavez ally. In 1972, the UFW defeated a growers’ initiative through an even larger statewide grassroots mobilization, overcoming a $500,000 television campaign for the measure (a lot of money in those days).

While the UFW lost its own statewide initiative campaign in California in 1976, it waged the biggest field effort the state had ever seen. UFW volunteers collected 720,000 signatures in just 29 days to qualify the initiative for the ballot, which may still be a record for volunteer signature gathering in the state.

As I discuss in my book, Beyond The Fields, UFW alumni used this electoral outreach model to first increase Latino/labor political clout Los Angeles, and then in California. The model was also used to win key House races in 2006, and helped Barack Obama take the formerly red states of Colorado, Florida, Nevada, and New Mexico in 2008.

Fred Ross Sr., not Cesar Chavez, created the UFW electoral outreach model – basing it on his successful effort in 1949 to elect Ed Roybal as Los Angeles’s first Latino City Council member. And it was UFW Organizing Director Marshall Ganz who took Ross’s lessons to the next level in the UFW’s 1972 and 1976 campaigns and beyond.

But Cesar Chavez had to approve the implementation of Ross’s strategy at a time when grassroots voter outreach ran directly against prevailing campaign wisdom. While the 2008 Obama campaign was widely credited for reviving grassroots electoral outreach, anyone reading about the earlier UFW campaigns will recognize the roots of Obama’s strategy.

Chavez Launched the Greatest Activist “Incubator” of Our Times

And then there is Dolores Huerta, who is still joining workers on picket lines at age 85.

Not every progressive organization commits resources toward developing future activist leaders. In fact, far too many see young activists as short-term resources that can be overworked and then quickly replaced.

For all of the progressive social movements and campaigns over the past forty plus years, how many have transformed young activists into veteran organizers and longtime strategic visionaries? ACORN long played this incubation role, as to the national network of Public Interest Research Groups (the PIRGs).

But the list is not long. And when we consider how many UFW alums may not have had organizing careers but for the opportunity Chavez provided – Eliseo Medina thought he would have ended up as a foreman on a ranch, and female organizers such as Huerta and Govea would not have been hired by primarily male worker unions – it becomes clear why Cesar Chavez’s launching of the greatest organizing “incubator” of our time should be more widely known.

Obviously, three facts do not tell much of the story. That’s why Cesar Chavez Day was created, and why everyone should take some time on March 31 to check into the history of one of the nation’s most inspiring leaders.