Occupy’s Protest Is Not Over. It Has Barely Begun 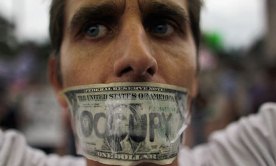 A good many observers wonder, is Occupy over? After all, the encampments that announced the movement a year ago have largely disappeared, and no obviously similar protest demonstrations of young people have taken their place, at least not in the United States.

Nevertheless, I think the ready conclusion that the protests have fizzled is based on a misconception of the nature of movements, a misconception influenced by the metaphors we rely on. We think of these eruptions as something like explosions, Fourth of July fireworks perhaps that shoot into the sky, dazzle us for a moment, and then quickly fade away. The metaphor leads us to think of protest movements as bursts of energy and anger that rise in a great arc and then, exhausted, disappear.

In fact, no major American movement of the past fits that description. The great protest movements of history lasted not for a moment but for decades. And they did not expand in the shape of a simple rising arc of popular defiance. Rather, they began in a particular place, sputtered and subsided, only to re-emerge elsewhere in perhaps a different form, influenced by local particularities of circumstance and culture.

Movements that may appear to us in retrospect as a unified set of events are, in fact, irregular and scattered. Only afterwards do we see the underlying common institutional causes and movement passions that mark these events so we can name them, as the abolitionist movement, for example, or the labor movement or the civil rights movement. I think Occupy is likely to unfold in a similar way.

And it will not subside quickly. Like earlier great movements that changed the course of American history, Occupy is fueled by deep institutional lacunae and inconsistencies. The mainly young people who are Occupy represent a generation coming of age in societies marked by an increasingly predatory and criminal financial capitalism that has created mass indebtness and economic insecurity. At the same time, the policies that once softened the impact of economic change (which some commentators once thought were necessary for the “legitimation” of capitalism) are being rolled back.

Think of the bitter pill of the broken promises to young people who were told that education was the route to security and prosperity and who now graduate to unemployment and huge debts. And this is occurring in the context of amazing revelations of the corruption of always-flawed American electoral procedures.

Then, there is the looming threat of ecological disasters that threaten the future of the planet itself. These conditions reflect deep institutional problems: they are not likely to be solved or even much softened very quickly, and so long as they persist, they will fuel the protests that are an extension and continuation of Occupy, whether we give them that name or not.

A movement forceful enough to change the course of history must accomplish two great tasks. One is communicative. The movement must use its distinctive repertoire of drama and disturbance, of crowds and marches and banners and chants, to raise the issues that are being papered over by normal politics, for the obvious reason that normal politics is inevitably dominated by money and propaganda.

On this, Occupy has already made substantial headway. The slogans that assert we are the 99%, they are the 1%, named the historic increase in inequality in the United States during the past few decades as the main issue, and the movement dramaturgy of encampments and masks and general assemblies and twinkling fingers helped to give the message heft and appeal, even to the media that had at first simply disparaged the movement.

To be sure, there were lots of complaints that Occupy had failed to issue its own policy proposals – which I think it was wise not to, since to do so would have ensnared the activists in endless disputes about particulars. But that is quibbling. It is far more important that we can see the influence of the movement’s main issue – extreme inequality – on the speeches at the Democratic convention, for example, or on the ongoing strike of 29,000 school teachers in Chicago who have been joined by students and parents in their demands not only for salary increases, but for a roster of improvements in the public schools. So far, good.

However, movements that make an imprint do more than communicate. They also threaten to exert a distinctive kind of power that results from refusing co-operation in the routines that institutionalized social life requires. That is the power that workers wield when they walk off the job, or that students muster when they refuse to go to class, or that tenants have when refuse to pay the rent, or that urban crowds exert when they block streets and highways. In principle, it is also the power that debtors might mobilize if they threatened to default on their loans. This sort of disruption – in essence, the strike writ large – is harder to organize than a rally or a march because people will fear reactions, which are likely to be swift and harsh. So, the protesters have to figure out how to defend themselves.

This is also the problem that other great protest movements confronted: the abolitionists had to work out how to sustain the “underground railway” in the face of southern posses, and the sit-down strikers of the 1930s had to figure out how to defend their factory occupations in the face of company police and sometimes state militia. I suspect that Occupy is struggling with that problem now, as an expanded Occupy begins to try to organize campaigns against mortgage foreclosures, student and credit card debt, and even the public debt saddling municipalities.

The stakes are large, for the 1%, and for the rest of us.

This piece first appeared on commondreams.org