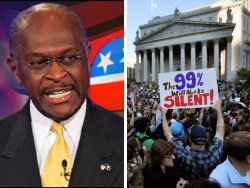 I was rapidly changing channels on the exercise machine trying to follow news coverage of the Bloomberg News’ revelation that the federal bank bailout was not the $700 million publicly discussed (via TARP), but was instead a secret $7.7 trillion. But all of the television news shows, including allegedly “progressive” MSNBC were talking about Herman Cain’s mistress, and then went on to discussing Newt Gingrich. Cain never had a chance to be the Republican nominee, and was on a downward spiral even before the latest revelations. Yet his situation completely eclipsed the dramatic expose of how the 1% gets government money free of the normal controls of a democratic nation. Welcome to Campaign 2012, and the Occupy movement’s new media world.

It seems that a bulb went off in the heads of news editors this week illuminating this thought: Thanksgiving is over, and its time to go 24/7 on 2012 campaign coverage. We even saw the New York Times trot out a front-page story on how white Pennsylvania voters do not like Obama, even using photos of two women who did not even support him against McCain. In 2008, the media could not get enough of interviewing older, blue-collar whites that backed Clinton in the primaries but were skeptical of Obama; this coverage (in a state Obama won easily) eclipsed the role played by Latino voters in multiple states in swinging the election.

The campaign is on, and the national media interest in an Occupy movement that focuses on inequality and economic injustice rather than candidate endorsements could soon decline. If young people and labor union members are diverted to political campaigns, it could become harder for Occupy to generate the large crowds that have given it broad credibility.

But Occupy could also remain center-stage by doing exactly what it has been doing: highlighting inequality and abuses by the 1% while continuing to build a broader base for change. As politicians see potential voters attending Occupy events, they will begin moving to the movement, reversing the all too common pattern.

In some races, such as Elizabeth Warren’s Massachusetts Senate race, the national media has already picked up the Occupy v. Wall Street frame. And races in Ohio, Wisconsin, California and other states will offer similar opportunities to generate national media attention to Occupy’s core issues.

Activists do not like to feel dependent on traditional media coverage. But Occupy’s positive national coverage quickly boosted the movement. It may seem tempting to keep “organizing at the grassroots” and not get “diverted” by the 2012 campaigns, but that will lead many potential supporters to conclude that the movement “failed” and lacked sustained commitment.

Since Occupy emerged as a critique of politics and elections in the United States, the 2012 campaign provides great opportunities for messages about inequality and the 1% to impact national campaign coverage. Having seized center stage with a message that had been barely discussed in the traditional media for years, Occupy cannot give up its place as the media focuses on Mitt’s latest flip-flop, Newt’s latest “client” list, and Obama’s struggles with blue-collar voters.

The voters 2012 have heard it all before. Only Occupy offers something new, which is why its agenda of inequality and democracy for the 99% could become the key election issues next year.