Occupy Movement at the Crossroads 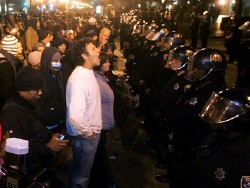 Two months after launching, the Occupy movement faces a critical test. Since drawing worldwide attention to the unequal distribution of wealth in the United States, and becoming a powerful voice for “the 99%,” the movement has become ensnared in local battles over the right to camp in public places. For some, the control of public space goes to the heart of the Occupy agenda, as the guardians of these spaces are seen as also protecting the 1%. For others, battles with local governments and police forces distract from focusing on Wall Street and the economic elite. Regardless of how one comes down on this question, the media coverage and messaging of the Occupy movement has shifted from the 1% vs. 99% struggle to battles over the right to camp. And energies devoted to battling police at Occupy Oakland, Occupy Portland and other spaces are not being spent occupying banks, hedge funds, foreclosed homes, and other tangible targets of the initial Occupy drive. Successful movements must be flexible enough to change tactics in the face of roadblocks, and activists’ camping in public spaces is not strategically necessary for the Occupy movement’s success.

In the past few days, police actions in Oakland and Portland (and at Wall Street’s Zucotti Park this morning) have highlighted the shift of media coverage of the Occupy movement from struggles by the 99% against the 1% to battles with police and local governments over the right to camp in public places. Public discussion of Occupy is also focusing on the struggle by campers to hold their turf, with abuses by financial institutions a secondary topic.

Public Squares vs. The 1%

Does a movement to redress income inequality have to camp overnight in public squares to succeed? I don’t think so.

Occupy galvanized the nation by highlighting the obscene control of the nation’s wealth by the 1%, and our political system’s inability to correct this. The takeover of a private park near Wall Street offered a perfect symbol for Occupy’s economic inequality message.

After Occupy Wall Street, activists in hundreds of other cities sought to replicate its transformation of a public space into a campaign headquarters. While many questioned sustaining such campgrounds come winter, the more imminent threat came from local authorities that did not want overnight camping in their public squares.

If the Occupy movement had originally emerged as a strategy to takeover public squares rather than to redistribute wealth, it would not have so captivated the world. Yet now we have activists across the nation rushing to defend Occupy campgrounds against police evictions, with many suggesting that reclaiming public space, rather than income inequality was what the movement has always been about.

These expressions of solidarity with Occupy campers are understandable. But if the movement spends the next weeks battling police and local governments over public spaces, critical momentum will be lost and potentially dramatic direct actions highlighting inequality will not occur.

With many religious groups, unions and nonprofits backing Occupy, there are plenty of available buildings in which activists can operate local chapters of the movement. The African-American civil rights movement, anti-war campaigns, and nearly every other social justice struggle has grown without supporters camping out in public places, so it is not clear why some believe Occupy’s success depends on this tactic.

A Movement in Infancy

The Occupy movement is less than two months old. Its remarkable success in its short life can cause us to forget the normal time trajectory for successful social movements.

The Civil Rights Movement had proceeded for decades before Rosa Parks refused to move to the back of the bus in 1955, and it took another nine years after the Montgomery Bus Boycott for the key federal civil rights bills to pass.

Cesar Chavez began his quest to organize a farmworkers union in 1962, and it took thirteen years before the California Agricultural Labor Relations Act was enacted.

In every successful movement, tactics and strategies change as the situation demands. This flexibility overcomes roadblocks, and puts authorities on the defensive as they try to anticipate what activists will think of next.

The Occupy movement’s takeover of public spaces worked for a time, but has now become a diversion. There is no shame in abandoning a fight over camping in public spaces that was always a means to an end.

Wall Street does not fear battles between police and activists in Oakland’s Frank Ogawa (renamed Oscar Grant) Plaza. But it has to be concerned when thousands of non-campers march as part of the November 2 Oakland General Strike, raising the specter of ongoing direct actions targeting the 1%.

On Thursday, November 17, the AFL-CIO, SEIU, CWA and the Laborers’ Union are joining with Occupy Wall Street and groups like MoveOn.org and the American Dream Movement for “We are the 99 percent” rallies. These events commemorate the two-month birthday of Occupy, and will hopefully be part of a refocusing of the movement on its original goals.

The eviction of campers is not a “defeat” for Occupy, nor even a setback. And if it redirects activist energies toward the 1% and away from local police, Wall Street and its allies will regret not pushing to allow the camping to continue.