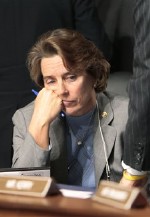 As the saying goes: “when the people lead, the leaders will follow.” In today’s Arkansas primary, as Senator Blanche Lincoln faces likely defeat, she has the President’s support – but really not much besides his name. Barack Obama knows that Lincoln – who killed the public option, and colluded with Republicans to sink much of the progressive agenda last year – will probably lose, and that activists who helped him win the White House are supporting her opponent, Bill Halter. Three weeks ago, Obama chose not to campaign for Pennsylvania Senator Arlen Specter in the final days of the primary – who went on to lose to progressive Democrat Joe Sestak – for the same reason. Obama has now realized that 2010 is another year of change, which means that he can’t be viewed as defending the status quo.

As Sam Stein reported yesterday in the Huffington Post, Obama has been conspicuously absent in the Arkansas Senate primary in the past week. “[White House] aides won’t go there on record, or even on background,” he wrote. “But they don’t correct the assertion that they’ve stepped back from the race. The evidence is obvious. Save a perfunctory, donate-to-Blanche-email signed on June 2 by Vice President Joseph Biden, the type of formal campaigning that team Obama rolled out prior to the first vote (with radio ads and robocalls) has been completely non-existent.”

This is quite a contrast from a month ago, when Obama did a radio ad for Blanche Lincoln – claming that the conservative Democrat had “stood up to the insurance companies” to pass health care reform, even though she joined a GOP filibuster to kill a public option that would hold insurance companies accountable.

What happened in the interim? The May 18th primary, where Lincoln failed to get 50% and avoid a run-off – a race she is expected to lose to Lieutenant Governor Bill Halter. MoveOn, Democracy for America, the Progressive Change Campaign Committee, labor unions and environmentalists – i.e., Obama’s allies – are all mobilizing to defeat her.

2010 is becoming a toxic year for incumbents on both sides of the aisle – and with voters in a populist mood, defending the status quo is the kiss of death. The White House has defended Senators because they felt they had to. But because progressives Democrats had the fortitude to say “no” to a President they elected, Obama can read the tea leaves.

The same thing happened three weeks ago, when Republican-turned-Democratic Senator Arlen Specter was in trouble. Despite the President’s support, Specter faced the wrath of the liberal grassroots – and Obama feared being on the wrong side of history. On the eve of the primary, Obama declined to come to Pennsylvania to campaign for Specter – choosing instead to fly across the state to an event in Youngstown, Ohio. For seasoned political reporters, it was apparent that he was distancing himself from Specter.

Again, none of this would have happened if progressives had not been willing to take on Senators Arlen Specter and Blanche Lincoln. Obama is at core a pragmatist, and he had sided with the incumbents out of obligation. But when it became clear that Sestak and Halter were going to win, he did not want to go down in flames with them. Progressive activists are saving the Democratic Party from itself – and with that, Barack Obama’s own legacy.

Without Obama to stump for her, Blanche Lincoln is left with Arkansas’ favorite son – former President Bill Clinton. This would make her expected defeat today all the more satisfying. With NAFTA, DOMA and Welfare Repeal, Bill Clinton betrayed everything the Democratic Party stands for. Clintonism, which had dominated Democratic politics for the past 15 years, had always been about spitting in the face of progressives – proving you are “tough enough” to run against your own party and pander to conservatives.

Blanche Lincoln practiced Clintonism – and now she is going to lose her Senate seat because of it. Bill Halter’s election will be the defeat of Clintonism. But because our current President understands that his own base wants Democrats to stand up, it will not be the defeat of Obamaism.