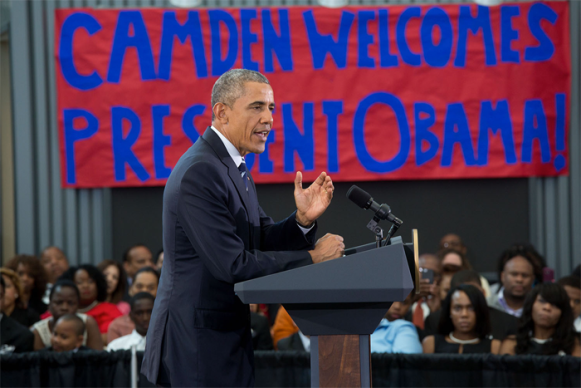 Donald Trump’s pledge to cut federal funds to sanctuary cities now frames the agenda of urban America. But before we move on to Trump, and in order to create a better post-Trump future, consider President Obama’s legacy toward cities.

As much as many of us love and admire Barack Obama, his record on such key urban issues as housing, transportation, education and poverty was disappointing. The most urban-oriented President to take office since John Kennedy or perhaps Teddy Roosevelt delivered surprising little to the struggling residents of America’s cities.

Yes we can blame Republican obstructionism. But President Obama never unveiled an urban vision akin to LBJ’s “Great Society.” Nor did he even try to make the crisis of cities a top public priority. As James DeFilippis, editor of an important new book, Urban Policy in the Time of Obama, puts it, Obama’s urban initiatives were “all fairly small, modestly funded, and low profile.”

Why should progressives and Democrats care about Obama’s record when Trump poses such a threat? Because the Obama Administration marks the second consecutive two-term Democratic presidency that failed to deliver for urban America. And if the core urban constituencies that put Democratic presidents in the White House cannot get their needs met, that is something that must be remembered as Democrats seek ways to win rural and suburban voters.

Obama’s greatest impacts on cities were through “city-neutral” policies like the Affordable Care Act, the 2009 stimulus package, reducing veterans’ homelessness and expanding the rights of the GLBT community. None of these policies were specifically directed at cities but each primarily benefited urban America.

If Obama’s urban strategy was to cloak city-centered policies under a broader policy tent, that strategy worked. Where the former Chicago community organizer fell short, however, was in implementing policies whose urban-centrism could not be disguised.

When President Clinton spent six years ignoring the urban housing crisis before adding funding in his last two years, progressives saw that as a reflection of his non-urban, Arkansas background. Chicagoan Barack Obama would be different, and his election revived hopes for a Great Society approach to expanding affordable housing.

This did not happen. Sadly, as Hillary Silver notes in the DeFilippis book cited above, “President Obama seemed to abandon his affinity for community organizing and tackling poverty at the grassroots soon after he entered the White House.” He never made the urban affordable housing crisis a front-burner issue. In the two years when Democrats controlled all three branches of government Obama missed a golden opportunity to make up for decades of inadequate affordable housing spending and production.

Obama’s inaction left a rising number of Americans living in unsafe, unaffordable and/or unhealthy housing. Homelessness in major cities has also increased. Nearly all of the positive steps toward addressing affordable housing and homelessness in the Obama era have come from the local level;  mayors and voters are stepping up after realizing that the long awaited boost in federal housing assistance will never come.

Republican obstructionism stopped Obama’s transit infrastructure spending plan. But how often did Obama go to cities and use outdated street cars, buses, and subways as a backdrop for pressuring Congress? If there were a concerted effort by the Obama Administration to build public pressure on Congress, I missed it.

Transit became another area where localities had to pick up what was once a federal responsibility.

Having recently read Janette Sadik-Kahn’s wonderful Streetfight: Handbook for an Urban Revolution on her and the Bloomberg Administration’s accomplishments in New York City without federal dollars, I can understand why the public no longer even assumes a federal transit role. But transit and housing once were pillars of the New Deal/Great Society Democratic Party agenda; instead, Richard Nixon’s “New Federalism”—ceding power to local and state governments plus private investors to do what the federal government once did—has prevailed.

Obama appointed charter school backer Arne Duncan as his first Secretary of Education, which spoke volumes. As CEO of Chicago Public Schools Duncan promoted high-stakes testing, privatization, and a “business approach” to schools; he was the type of appointment activists would be up in arms against if appointed by a Republican.

As with housing and transit, it takes major new dollars to improve results in urban schools. But with Obama committed to a neoliberal agenda at odds with local school activists, there was not even a progressive consensus on how existing dollars should be spent.

The result is that the Obama Administration did nothing to bridge the nation’s duo system of education. The mass closing of minority schools in Obama’s home city of Chicago symbolizes of how little progressive education reformers gained from the Obama presidency.

Obama’s overall economic success reduced urban poverty. But the mass shootings in Chicago, national media coverage of the impoverished Baltimore neighborhoods of the late Freddie Gray, and the ongoing troubles in other heavy minority urban centers showed much more needs to be done.

President Obama never fully pushed an anti-poverty agenda. We all can come up with valid justifications why, but the bottom line is that eight years passed without a constituency that voted in record numbers for Obama twice getting the type of gains that millionaires routinely get once Republicans win the presidency.

Yes, it is politically easier to reward people through tax cuts. True, Obama did push to raise the earned income tax credit and backed a hike in the minimum wage. And the Obama Administration had a laundry list of “new” programs—such as Choice Neighborhoods and Promise Neighborhoods—-that showed the Administration understood urban problems and wanted to help.

But in the big picture, those left behind by the Clinton and Bush Administrations remain behind. Maybe that helps explain the lack of African-American voter turnout for Hillary Clinton in Philadelphia and Milwaukee; people figured that if Obama couldn’t deliver for them there’s no hope another other president will.

As Democrats battle Trump and seek to forge a new winning electoral coalition, recall the mindset that brought us Bill Clinton in 1992. Clinton’s popularity with “Bubba” was key to his success, and Democrats were so eager to win that they overlooked where his “New Democrat” politics would take the country.

Barack Obama was supposed to restore urban policies to the heart of the Democratic Party agenda. This did not occur. Now that Democrats are again prioritizing non-urban voters, those involved in debating the Party’s future must ensure that an aggressively funded national urban agenda remains a central goal.

Randy Shaw is Editor of Beyond Chron. He offers lessons for battling politicians like incoming President Trump in The Activist’s Handbook.