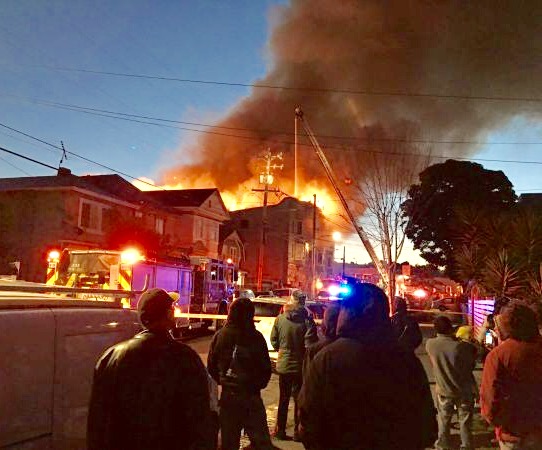 In a single week, Oakland had the following occur:

*A West Oakland residential fire killed four people. The building’s landlord had been working to evict some of the tenants, who had gone to court to get a restraining order against him.  The legal battle had escalated, and, as the tenants’ attorney told the East Bay Express, “Next thing I know, I get up this morning, my client’s building is on fire, it’s up in smoke.”

*The Raiders secure NFL approval to leave Oakland, but Alameda County taxpayers are still stuck paying for the $350 million deal in 1995 that brought the Raiders back from Los Angeles.

*The San Jose Mercury News reported on March 24 that more than two years before Oakland’s December’s Ghost Ship fire took 36 lives, “the building’s owners knew of dangerous electrical problems there…and resisted efforts to fix the problems.” In other words, the Ghost Ship deaths were readily preventable. Expect criminal charges to be filed against the owners in the wake of this report.

All three stories would alone have normally have dominated Bay Area news coverage for days. But with Trump dominating people’s attention, and the deadly West Oakland fire coinciding with the NFL’s Raiders vote, news about Oakland became almost too big to digest.

I see Oakland’s response to these events as signaling a city that understands its priorities. A city that, by fits and starts, is moving on the right path. A city that is finally taking its homeless crisis seriously. Oakland’s political establishment, residents and activist base, and the media have been in sync on the issues underlying these traumatic events, and that is all too rare for Oakland.

The Ghost Ship and West Oakland fires have exposed what those representing the city’s tenants have long known: Oakland has a deplorable housing code enforcement system. According to Darwin BondGraham of the East Bay Express, the San Pablo Avenue apartment building destroyed in the fire “has a recent history of numerous building code violations, including broken plumbing and heating, exposed wires, pests, electrical problems, and more.”  This time, Oakland’s failure to follow up on building citations may have  had fatal results.

I tried to help get it fixed over a decade ago and soon gave up as the political will was not there. Groups like Causa Justa: Just Cause have been pushing for code enforcement reform in Oakland for years, as well as for funding of the Tenant Protection Ordinance that voters passed in 2014.

The West Oakland deaths again demonstrate that Oakland cannot protect tenants on the cheap. I have to believe that the city will finally adopt the aggressive housing code enforcement model that San Francisco’s Department of Building Inspection launched in 1995 and which became a national model.

That model, which landlord organizations backed, centers on tough, early, and constant enforcement against the small group of owners responsible for most of a city’s code violations. It is directly opposite to Oakland’s lax approach.

The West Oakland fire should prompt stronger code enforcement just as the Ghost Ship tragedy awakened Oakland officials to the need to save artist warehouse space. After Mayor Schaaf proclaimed she did not want mass evictions, new guidelines were created. The recent attempt to evict a small group of artists from the Salt Lick warehouse has raised questions about the city’s commitment to artist housing, but indications are that the pressure for displacement is coming from the owners and not city officials (I am familiar with this scenario, as attorneys for the Tenderloin Housing Clinic, which I head, have since 2013 been defending artists facing eviction from their home at 1049 Market despite city support for artist housing at the site).

Oakland finally is inspecting warehouses to ensure that life threatening conditions do not exist. And now that the city is no longer ignoring the need to provide safe and affordable artist housing, it must expand this more vigorous enforcement to all rental units.

In 1990, incumbent Oakland Mayor Lionel Wilson blamed his re-election defeat on his support for a terrible financial deal for the Raiders to return from Los Angeles, where they moved in 1982. New mayor Elihu Harris then found himself under enormous pressure to get a deal done to bring the Raiders back in 1995.

Harris’ very manhood was attacked over his insistence on trying to strike a deal that protected the taxpayers. Media attacked Harris for supposedly getting so caught up in details that he risked losing out on Oakland’s last chance to get the Raiders back.

Harris gave in to the pressure. He got the deal done, on Al Davis’ terms. As Matier & Ross reported on March 29, thanks to “details” Harris was pressured to overlook, it will ultimately cost Alameda County taxpayers around $350 million dollars.

As bad as that deal was, the Bay Area media were thrilled to have the Raiders back.  One part of the deal required taxpayers to buy unsold tickets, and everyone said that was no problem because “Raider games always sell out.”

Well, the Raiders stopped selling out. And taxpayers were left with the bill.

This week was dramatically different. Instead of blaming Mayor Libby Schaaf for “losing” the Raiders, all attacks targeted the Raiders and the NFL.

Unlike 1995, the media did not promote the idea that Oakland needed an NFL franchise to be a “world class city.” That baloney only works in cities insecure about their stature, which Oakland no longer is.

Another sign of Oakland’s strength is its recognizing it must start seriously addressing homelessness. Opening a Navigation Center is a start, but what Oakland really needs to do is implement the master leasing program that is San Francisco’s core strategy for housing homeless single adults.

Oakland has an SRO supply that lends itself to a master leasing program, as well as many housing nonprofits that could lease the hotels. The problem has been a lack of money, but with revenue coming in from new developments the city will have new resources to address its worsening homeless problem.

We may look back at a traumatic March week as a turning point for Oakland. The city’s political leaders and residents had to choose what kind of city they wanted—and they made the right choice.