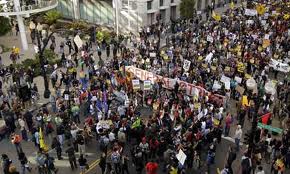 The New York Times Magazine’s long August 5 article on Oakland (“The Last Refuge of Radical America”) got many points right but some major arguments wrong. Chief among the latter is writer Jonathan Mahler’s conclusion that “urban bike shops, the restaurants with locally grown fare, the cafes with fair-trade coffee, a Whole Foods” and a cafe whose mission is to “bring people together and launch movements” while selling “Santa Cruz-brewed ginger ale at $3.50 a bottle” is “in a word, gentrification.” No, in a word, it is not.

“Gentrification” involves the displacement of a low-income, middle and working-class population and their replacement by more affluent residents; it has a class component that goes beyond the emergence of what Mahler describes as its cultural “tent poles.” Many Occupy Oakland and “anti-capitalist” activists ride bikes, prefer local fare and fair trade coffee, and while not favoring Whole Foods, buy their organic produce at stores like Rainbow Grocery; this does not transform these primarily low-income activists into “the gentry.” The big picture is that Oakland’s battle against gentrification remains a winnable fight, yet the media ignores grassroots activists effectively working toward this goal.

It’s hard to capture the tenor of a city in a single article, and Mahler’s New York Times piece was better than most. He accurately describes how much of the nation views Oakland in the wake of the ongoing anarchist protests. The article was written before anarchists’ August 3 attack on Obama’s Oakland headquarters to protest the city requiring permits for selling goods at the monthly first Friday night Art Murmur — an action consistent with Mahler’s depiction of these activists’ ongoing confusion over targets.

But there is a difference between accurately describing how the rest of the country sees Oakland and the actual realities on the ground. And Mahler missed these. He never mentions that Oakland has rent control and just cause eviction laws, many progressive elected officials, and that organized labor plays a major role in charting the city’s future.

Mahler also ignores the many progressive activist groups who have effectively battled gentrification for years, which is why so much of the city remains low-income, and working to middle-class. It’s not their fault that the media prefers highlighting vandalism by a primarily white group of bandana-wearing “revolutionaries” who are unrepresentative of the city’s progressive community.

I have previously described why some neighborhoods gentrify while others do not (“Solving The Urban Puzzle: Why Gentrification Happens (And Why It Doesn’t)”). I have also insisted for over thirty years that Tenderloin residents and small businesses deserve to have safe streets and a quality of street life equal to more affluent neighborhoods. As long as laws are in place to ensure that low-income residents are the beneficiaries of neighborhood improvements, cafes, grocery stores selling healthy foods, and quality neighborhood-serving businesses are a plus.

This message that non-gentrified communities can and should offer a high quality of living was clear from many of the responses to Adam Davidson’s New York Times piece last month, “Why Can’t the Bronx Be More Like Brooklyn?.” Bronx residents insisted they did not want to live in a gentrified Park Slope or Williamsburg but simply wanted their trash picked up and the same police approach to public drug sales as occurred in these now upscale areas. Harlem residents repeatedly make the same point: they do not view cleaner and safer streets as the first step toward “gentrification,” but rather as something that they are just as entitled as the wealthier neighborhoods to receive.

So let’s not make believe that “gentrification” is something apart from changing a population’s economic class. Or that advocates for locally grown food, fair-trade coffee, and organic produce are part of some gentrifying elite. Progressive activists initiated the drive for such products out of a consciousness about the global environmental and labor impacts of food — we need more of these options in low-income communities, rather than identifying their arrival as a chilling sign of “gentrification.”

Mahler concludes, “Oakland is simply too geographically well positioned and financially underexploited not to absorb the creative, professional and entrepreneurial overflow from more expensive places like San Francisco, Silicon Valley and Berkeley. And as it continues to develop its own gritty-chic cachet, there’s a good chance Oakland might become more than just a default option for some of the Bay Area’s nouveau riche.”

I’ve heard about Oakland’s imminent “gentrification” since the early 1980’s. It reminds me of all the real estate people of that period who told me with absolutely confidence that all of the laws we had passed to protect the Tenderloin from gentrification would eventually be gone (when I told one of these speculators in 1986 that our zoning laws prevented the Dalt Hotel from being demolished and replaced with a high-rise condo tower, he replied “by 2000, zoning laws can change”).

Oakland is a majority-tenant city that has laws in place to prevent the type of wholesale displacement that accompanies many gentrified communities. It also has a broad progressive political coalition that has elected the last two mayors, and has successfully defeated mayoral candidates backing pro-gentrification policies.

Oakland’s vigorous nonprofit sector and grassroots community organizations work every day to maintain the city’s economic diversity. This work — from building affordable housing to fighting the eviction of tenants through foreclosures to small business economic development strategies — has been consistently ignored while the media depicts anarchist vandalism as somehow “symbolizing” the city.