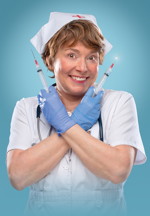 A Reality Check on Life and Work At the Bedside

“I could stick a suppository in you or give you an enema. If neither a suppository nor an enema worked for you, I’d glove up, lube up my finger, gently slide it up your anus and dis-impact you. I’d do what it takes. I’d get it out. I could put a tube up your penis, all the way to your bladder; you’d thank me. I do these things these extremely intimate things to strangers, People I’ve just met, people like you. It’s my job. I’m a nurse.”

Talk about up close and personal! For the next 75 minutes, Whittaker takes us to work with her on the neurology unit of a major California teaching hospital. The resulting visit to the frontlines of health care is often hilarious, sometimes sorrowful, but always riveting. And, most important of all, it’s an incisive reality check on what goes on behind the scenes, every day, as skilled and dedicated care-givers struggle to work together on behalf of their patients under conditions not always conducive to quality patient care.

On the night I attended Vital Signs, many in the audience were RNs or aides, whose nodding heads and belly laughs bore all the signs of instant identification with the material. When the lights came up, they gave Whitaker a well-deserved standing ovation.

Originally scheduled only on Saturday and Sunday nights at The Marsh, Vital Signs has now been extended until July 21, with an additional performance added on Friday evenings, due to the packed houses it has drawn so far. (For tickets, go to www.themarsh.org/alison_whittaker.html)

Sure, there’s a disclaimer in the program book that says Whittaker’s play is “broadly fictionalized” and “any resemblance to real people and institutions, living or dead, is entirely coincidental.” I guess you could say Willy Loman’s resemblance to real-life salesmen was “coincidental” too? But, in this case, Whitaker — a playwright with twenty years of hospital experience — makes her intentions clear in the liner notes: “Although I think the public has a general understanding of the role of the nurse, I don’t feel our story has been fully and accurately portrayed.”

Through her skilled portrayal of multiple characters — both patients and hospital staff members — Whittaker not only helps audiences understand what RNs really do, in their daily 12-hour routine of high-stress multi-tasking. She also spotlights, in lovingly comic fashion, RN inter-action with myriad other players on the scene — patients, their families, unit clerks, housekeepers, aides, nurse managers, doctors, and even the occasional out-of-touch “Nurse Week” visitor from academia.

With so much ink and airtime elsewhere, physicians get just a walk-on role in Vital Signs. As Whitaker explained to me after the show: “I feel like there is so much about doctors but there’s nothing about nurses and nurses’ aides. I work on the night shift. It’s kind of the joke on the night shift, where are the doctors? Patients are constantly saying, ‘ I need to talk to the doctor, and we’re thinking, ‘Well, good luck!’ I am certainly not anti-doctor and I work with some great doctors.

Whittaker’s play is a much-needed antidote to the sugar-and-spice/ everything’s-nice version of nursing that is so often promoted by hospitals, and even some nursing organizations. The play includes a great little spoof of that RN-“appreciation” ritual known as “Nurses Week.” During this annual exercise in feel-good gestures that don’t last long, many cost-cutting employers shower their overworked nursing staff with trinkets and triviality, while denying them the unit-based resources they need to deliver quality patient care. “They give us buckets of Kentucky Fried Chicken or sandwiches from Subway when really we deserve Chez Panisse,” Whittaker says.

In fact, Vital Signs is a great model for how working RNs should give voice to their professional concerns, particularly as they relate to the gap between hospital administration rhetoric about “teamwork” and actual workplace conditions adversely affecting patient safety, like under-staffing. Even in California, with it’s still unique and much-needed state-mandated nurse-patient staffing ratios, patient loads can be overwhelming because of the complexity and acuity of the ills and injuries of those receiving in-patient care. That’s why the California Hospital Association’s recent attempt to weaken staffing ratios, aided and abetted by SEIU/United Healthcare Workers leader Dave Regan, has triggered such an uproar from Whittaker’s own union, the California Nurses Association (CNA) and even SEIU-represented nurses in the state.

A native of Toronto, Whitaker was not originally trained as an actor or writer. Her play is the product of more than a decade spent developing and honing new skills. (And, if you think writing a play is easy — even after a lifetime as a professional writer — let me assure you, based on my own experience, co-authoring a play called Beside Manners, it is not!) Whitaker took acting and writing classes at the Marsh, where she received help and encouragement from David Ford, who teaches solo performance at the theater.

In Vital Signs, she had to be careful not to violate patient confidentiality or the trust of her co-workers. “I disguised every patient,” she explains. “I changed details, changed the diagnoses. I made many of them composites and many have come from different settings in which I work. I also checked with all of the people with whom I work to make sure they were okay with the play. They were.”

Last year she launched Vital Signs at the San Francisco Women’s Festival and then at the Marsh. She has promoted it by passing out postcards at city hospitals, by word of mouth and through various nursing and healthcare networks. Her own union, the CNA, has helped out some, but could do far more, given its formidable PR capacity and recent commissioning of a great nursing-related theatre piece in Chicago, performed by Anna Deavere Smith (who was recently demoted from nurse manager to working RN again on Showtime’s Nurse Jackie).

When a union has a rank-and-file member able to put on a one-woman show, with the dramatic flair and story telling ability of a home-grown-Anna, it’s time to broadcast that good news far and wide!

Journalist Suzanne Gordon, a new resident of Richmond, CA., has written, edited, or co-authored more several dozen books about nursing and health care for Cornell University Press and other publishers. Her study of California’s nurse-patient ratios law is called Safety in Numbers and her most recent edited collection, First Do Less Harm: Confronting the Inconvenient Problems of Patient Safety, deals with many other patient safety issues. For more information, see www.suzannegordon.com. She can be reached at Lsupport@comcast.net.