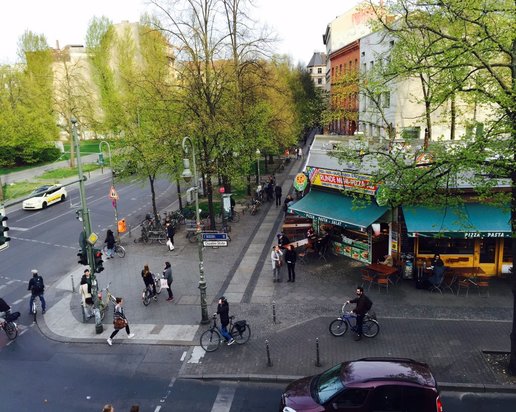 From the moment that Vision Zero began capturing attention in American cities, we’ve heard many admiring references to its success in Europe, particularly in its birthplace of Sweden.

I’m fortunate to have the opportunity to research those experiences and their lessons for the growing number of American communities working to eliminate traffic fatalities and serious injuries. As part of an Urban & Regional Policy Fellowship with the German Marshall Fund, I’m spending two months visiting Stockholm, Sweden; Rotterdam, Netherlands; and Berlin, Germany to interview experts and observe first-hand their approaches to traffic safety. The goal of my research: to gather and share replicable lessons for American communities, particularly in urban areas, where we’re seeing the most momentum for Vision Zero.

First, a disclaimer: I’m still actively researching and interviewing, so it’s too soon to share my sense of the “full story.” Please consider these early impressions.

And, second, a clarification: What the Swedes — and to a lesser extent the Germans — call Vision Zero, the Dutch call Sustainable Safety. While there are many similarities to what can generally be termed a “safe systems approach” to transportation, there are more differences than I realized between their efforts. (But more on that in a future post…)

So what have I observed thus far? Here are five initial  takeaways, focusing on areas that seem relevant to the U.S. experience and worthy of more exploration.

1) Managing speeds – and speed differentials – is a top priority

In all three of these countries, the leaders of traffic safety efforts emphasize that managing speed is the #1 determinant in their successes in improving safety.

Over the past 15 years, the national governments of Sweden, the Netherlands and Germany have all proactively and systematically changed their approaches to speed. Each nation (to differing degrees, but all significantly) has lowered speed limits for a clearly defined hierarchy of roads and corresponding speeds. For instance, the Netherlands has shifted

> From 50 kilometers per hour (kph) to 30 kph on smaller, residential streets

> From 70 kph to 50 kph on bigger, or what we’d consider arterial roads and

In each of the three nations, nearly everyone I’ve spoken with credits speed management as the greatest contributor to their success in improving safety on the streets and saving more lives.

But there’s another important factor: considering and managing for speed differentials. This means a great deal of thought is given to the kinds of users and the mix of users in the specific areas when designs and policies are laid out. For instance, if an area is expected to have many different road users moving at different speeds — such as a mix of people walking, bicycling and driving — the speeds need to be lower to accommodate that mix. This strategy prioritizes the fact that slower speeds will be more forgiving when crashes do occur between users of such different weights and velocities.

It may sound obvious, but U.S. communities could greatly benefit from paying greater attention to speed differentials when we make decisions about street design, appropriate speeds and other safety policies.

2) After speed, street design is key

Among the three nations, there’s also similarity in their high level of attention toward re-designing the physical layout of streets for the safety of  all users.

While the specifics may differ, leaders in Sweden, the Netherlands and Germany all  point to investment in safer street design as the next most important element of their successes thus far. For instance, in the Netherlands, there’s strong credit given to the addition of more roundabouts to slow traffic at intersections, and to greater physical separation between cars and bicycles on roads with larger volumes of traffic and higher speeds.

In Sweden, leaders have emphasized adding physical dividers to separate oncoming auto traffic on roads outside the urban areas, where they’ve seen the greatest improvements in safety to drivers. In urban areas, there has been attention to creating safer pedestrian crossings and adding separated bikeways.

3) Engineering efforts have taken priority  over education and enforcement

Among the various “Es” that make up the core focus areas in creating safer streets, engineering is far more developed in these countries than the education and enforcement components — as seems to be the case in the United States, as well.

In each of these countries, there has been more emphasis on the issues of street design and policy-related changes, such as managing speed through lowering speed limits and adding safety cameras, than in the other areas. That’s not to say there hasn’t been any increase in education and enforcement, but those efforts haven’t received the same priority and their impact isn’t as clear as speed management and street design.

As in the United States, the term “education” is broadly defined and serves as a catch-all for many different things. In that area, there seems to be greater emphasis on two strategies: first, integrating safety training among youth, including into school curriculums; and second, focusing on drivers (and the actual vehicle design) of large freight trucks, which are known to cause more hazards. In this latter area, American communities could learn from the collaboration among European Union nations on freight vehicle safety issues, particularly as we think about a U.S. approach to dealing with varied state driving regulations.

In Sweden, the Netherlands and Germany, it is impressive to see the deep engagement between the public and private sector on the safe systems approach. There is far more collaboration and investment from automakers, insurance companies and other related private sector players in these European countries than in the United States.

I was impressed to learn that German and Swedish insurance companies invest significant resources in traffic safety research. Of course, there’s a win-win opportunity there for the insurance companies to further the broader goals of safety while also minimizing their own risk and costs related to collisions and injuries. One interesting Swedish program piloted a system of installing speed measurement capability in the cars of some insurance policyholders, who were then rewarded with lower premium payments as they proved that they stayed within the speed limits.

When it comes to partnership with automakers, there’s a healthy skepticism about emphasizing in-car technology improvements without the same level of attention to benefiting the more vulnerable road users outside the car. But as technology capacity grows, this could change.

In nearly every conversation I’ve had thus far, people acknowledge the tremendous opportunity – and, I’d say responsibility – to use technology to prioritize traffic injury prevention, though not at the expense of the other focus areas that need focus, such as road design, speed management, enforcement, and education, etc.

Both Sweden and the Netherlands are giving significant consideration to shaping the next iteration of their safe systems approaches to transportation.

Swedish leaders acknowledge that their emphasis over the past 15 years has been in the areas of enhancing automobile technology systems and improving design on rural roads. Their Vision Zero 2.0 places a greater focus on urban areas and on the safety of people biking and walking.

Interestingly, some of the people I met with in Sweden seemed genuinely excited to learn from the U.S. experience given our more explicit focus on those areas.

The Dutch are also giving their Sustainable Safety approach a fresh look, analyzing what has worked and what needs to be updated. There’s concern that the leaders of the Netherlands are directing less energy and resources toward traffic safety efforts today, in part because attention has waned as fatalities have decreased, with some assuming the work is done and moving on to other priorities. There seems to be interest in looking at the Swedish model and the nascent U.S. efforts to find ways to more actively engage key stakeholders to help renew the momentum.

How these countries position their “second wave” efforts after the early phases of success in making streets safer can offer U.S. leaders insightful  models to avoid our own version of Vision Zero burn-out in the future.

I expect to learn far more, particularly about Vision Zero 2.0 and opportunities to advance private sector partnerships, at next week’s Towards Zero conference, a gathering of international Vision Zero experts in Gothenburg, Sweden.  I promise to share more then.

This piece first appeared in the Vision Zero Network blog