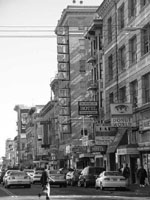 Club Six, the popular South of Market dance venue on 6th Street, is in danger of having its entertainment license suspended. As part of its extended hours permit with the San Francisco Entertainment Commission, the club must not violate the commission’s “Good Neighbor Policy.”

But according to recent inspections, it has been out of compliance. On March 16th, the Entertainment Commissioner sent out a notice to the owner, Angel Cruz, of an upcoming hearing. For many tenants who live on 6th Street, such disciplinary proceedings are long overdue.

Section Eight of the Good Neighbor Policy states that there should be “absolutely no sound from the establishment audible inside any surrounding residences.” According to its extended hours permit (which allow it to stay open until 4:00 a.m.), the Club’s sound system must be kept to no more than 76.74 decibels (dBA) inside at all times.

But according to the most recent test administered on February 4th, Entertainment Commission sound technician Vajra Granelli registered between 93 – 97 dBA inside the club. After this test, Granelli recommended disciplinary action against the club.

“The process has started,” said Bob Davis, Executive Director of the Entertainment Commission, “and it is very specific so we ensure that everyone’s due process rights are protected.” Angel Cruz will be required to post a public notice on his premises informing the community that disciplinary action is taking place against the club.

Jim Ayers, who lives at the Lawrence Hotel directly above Club Six, says he has been battling the noise for over four years. “I had tears in my eyes when I heard the news of the hearing, that’s how much this means to me,” he said. “It’s a quality of life issue. I have hypertension and I’m on sleeping pills, but it doesn’t help. The walls vibrate here. When I stand up the bass massages my feet. I just want the right to be able to sleep at night.”

The club on Sixth Street between Market and Mission shares the block with over 1,000 SRO residents. Tenants close to the club have two complaints — the excessive noise emanating from the building and the lines of people who block the sidewalk. They say the problems began to increase after Club Six’s expansion in the early part of 2004.

To expand the club and get an after-hours permit, Cruz solicited support from the South of Market Project Area Committee (SOMPAC) – a citizens’ advisory committee run by the Redevelopment Agency. SOMPAC held a meeting on Feb. 23, 2004 to vote on whether to support the proposed expansion of the club.

At the meeting, residents expressed concern over the large crowds and the loud noise. Cruz assured SOMPAC that he would soundproof the entire club by “bringing in the best sound people to deal with the issue,” and that he would look into adding a second entrance on Jessie Alley to ease congestion.

SOMPAC approved the expansion unanimously. But no second entrance has been added to the Club. While Cruz has spent some time and money soundproofing the Club, it obviously hasn’t been enough.

Cruz did not return calls at press time, but his attorney, Mark Rennie, said he isn’t concerned about the possibility of disciplinary action. “We are working on a compromise with the Entertainment Commission right now,” Rennie said. “Angel is fully committed to being a good neighbor and working this out. I’m already talking settlement with the Entertainment Commission.”

Metial Amitai, the SOMA representative for the San Francisco Safety Network, agrees that Cruz is not simply ignoring the problem. “I think Angel’s motivation is genuine here,” she said. “I know he has put a lot of money into the club trying to soundproof it. The problem is the building is very old and it is very difficult to soundproof. Having a club right below a place where people sleep has created a situation that is really difficult.”

Amitai set up a meeting on Jan. 30 with South of Market residents and Angel Cruz. She says that while Cruz may be trying to help now, locals feel that they have been abused for years where Cruz did nothing and they weren’t looking to speak amicably.

Ayers typified this attitude saying that he hoped the club wouldn’t get off lightly. “I’ve had to live with this for over four years so I want to see Club Six get more than just a slap on the wrist like a 10 day suspension,” he said.

Residents of nearby hotels can hear the noise, but it doesn’t always keep them from sleeping. For them, the crowds that Club Six attracts up to five nights a week are more of a problem.
Section 10 of the “Good Neighbor Policy” states that the permit holder “shall take all reasonable measures to insure the sidewalks adjacent to the premises are not blocked or unnecessarily affected by patrons.”

The club has three barricades stretching about 12 feet combined – that are designed to split the sidewalk in half. One side is for the line and the other is for foot traffic. But when the crowds start to increase, the line exceeds the length of the barriers and crowds begin to block the sidewalk.
Antoinetta Stadlman lives at the Baldwin Hotel, and works at the Seneca Hotel near Club Six. “About 60 – 70 percent of the time coming home from work I have to walk out into the middle of the street, into oncoming traffic to get by,” said Stadlman. “The barricades don’t seem to help at all, and the lines block access to a few of the nearby hotels.”

“I saw a guy with crutches trying to get past those crowds recently,” said Jeoflin Roh, an SRO tenant who lives around the corner from Club Six. “He had to step off the curb and between the parked cars to get by the club. He fell down in the street and the cars had to swerve to get around him.”

The crowds sometimes keep John Markham, who lives at the Seneca Hotel, awake. “There is one person who frequents the club who parks his motorcycle out front at least once a week,” Markham said. “Around 1:00 a.m. he revs the engine and that always wakes me up.”

According to Bob Davis, if the club’s entertainment license is suspended, it would only be temporary to allow Club Six to fix the problem. A second violation would mean a longer suspension, and after a third violation the permit would be revoked. Deputy City Attorney Jennifer Choi will prosecute the case against Club Six – with the Entertainment Commission serving as judges.

While it’s nice to see a club owner who is willing to sit down with the community and try to do something about the problem, it has obviously not been enough. In a building as old as the Lawrence, having a club directly underneath a residential hotel was always going to be a bad proposition.

With disciplinary hearings this week scheduled against another San Francisco club, Zebra Lounge, we will soon see if the Entertainment Commission has decided they are going to make an example of clubs that violate the commission’s noise policy.

EDITOR’S NOTE: Organizers at the Tenderloin Housing Clinic, which publishes Beyond Chron, is assisting 6th Street tenants on the issue of Club Six. Send feedback to bmalley@sfsu.edu