No on 10 Seeks to Turn Homeowners Against Tenants 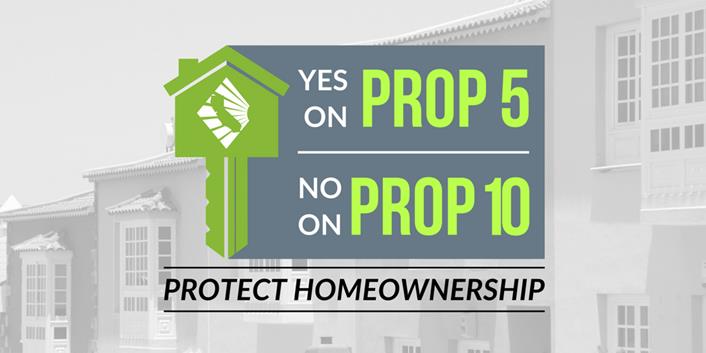 Realtors Wrong on Both

Having seen forty years of anti-rent control campaigns I am accustomed to their reliance on the most outlandish and cynical lies. And California’s No on 10 campaign reflects this.

But I think No on 10 breaks new ground in its lies to homeowners. A recent mailing claimed that Prop 10’s passage would see San Mateo County homeowners face a “161,000 drop in home values.” This despite there being no rent control in nearly all of San Mateo county. Prop 10 is also said to “threaten single-family homeowners” statewide, “eliminate homeowner protections,” and cause the average homeowner a $60,000 loss. Again, most California homeowners do not live in a rent control city.

Anti-rent control campaigns disproportionately rely on lies because they are asking most voters to cast ballots against either their personal or broader  self-interest. That’s why the Blackstone Group thinks nothing of already donating nearly $7 million to the No on 10 effort; it takes a lot of campaign disinformation to convince millions of homeowners that Prop 10 poses a threat to their financial security.

Many homeowners support making housing more affordable in California. They see it as good for neighborhoods, cities and the state. Many have kids who face both high student loan balances and high housing costs, an all too common double financial bind impacting millenials. Such homeowners fear their kids may move to another state to afford a home, leaving the parents a plane flight from their grandchildren.

California is an overwhelming Democratic state and its homeowners typically favor economic fairness.  The way in which the Costa-Hawkins act encouraged Wall Street speculators like the Blackstone Group to buy up single family homes as investment property—the abuse Prop 10 seeks to repeal—-is not fair. It is not fair to young buyers outbid for homes by Blackstone. Nor is it fair for the tenants whose landlord can triple their rent and force them to move on short notice for no reason.

No on 10 asks voter approval to continue a housing strategy that by any measure other than investor profits has failed. A strategy that made California the national leader in unaffordability. This is not a good track record to run on. But voter confusion over what the underlying Costa-Hawkins bill actually does, caused by a combination of opposition falsehoods and the effort to repeal a 1995 law,  has helped the “No” cause.

That’s why I expect the No side to continue pushing mailings, phone calls and television ads falsely scaring homeowners about Prop 10. Turning homeowners against tenants is bad for California, but good for Blackstone and other big No on 10 contributors.

It’s also no surprise that in many cities the No on 10 campaign is running a combined effort with Yes on 5. Prop 5 expands Prop 13 so as to further deprive cities of money for schools, parks, libraries, first responders, and other public services. Prop 5 and No on 10 have a critical feature in common: both promote selfishness over the public good.

Randy Shaw is Editor of Beyond Chron. He describes how repealing Costa-Hawkins is part of a broader California affordability strategy in his new book,  Generation Priced Out: Who Gets to Live in the New Urban America,  now available for pre-order from Amazon at a 33% discount.