No Need For Civility 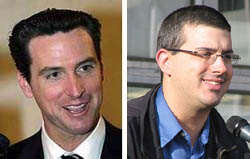 I like my sex safe and my politics raw.

That certainly applies to Supervisor Chris Daly’s proposed charter amendment to compel the mayor to sit down every month for a public Q&A session with the Board of Supervisors. The matter comes before the rules committee today, Friday June 30th. Since I can’t attend the hearing, I’d like to hereby submit my suggestions for how the sessions with the mayor should be run.

In a phrase: Keep them unrehearsed. No scripts. No briefing the mayor ahead of time, no submitting questions to Team Newsom so that they can come up with the best spin. This should not be the Disney version of democracy. Let’s keep it real. San Francisco government unplugged. It’s risky, I know.

When I was a young queer activist in my hometown of Philly, the weekly Thursday City Council meeting was often the place to go for entertainment. You couldn’t find a better fight than in City Hall. Sometimes council members literally took swings at each other, as they debated some heated issue. They screamed, banged on their desks and behaved in an uncivil manner. Like my family did around the dinner table, especially when the relatives were visiting. If only they had broadcast those council sessions. Talk about reality TV.

I’m not saying that the members of the San Francisco Board of Supervisors should put on their boxing gloves and duke it out. I abhor violence. But tempers do flare in the heat of a discussion. Or things get said that maybe folks regret afterwards. It’s human nature. Sometimes those remarks become immortal. How well I remember Supervisor Tom Ammiano’s infamous quip to conservative colleague Alicia Becerril who was oh so offended by the idea of the Sisters of Perpetual Indulgence (a group of gay male nuns) closing Castro Street on Easter Sunday for their 20th anniversary celebration. “I say to you, walk a mile in my pumps,” Ammiano told Becerril, after reminding her that as a gay man he had suffered at the hands of the Catholic Church, which of course objected to the outrageous celebration. The remark will no doubt be reserved a place in the queer Hall of Fame.

If the mayor is going to be given the questions ahead of time, it may as well be President Bush’s press conferences. Nothing controversial or interesting will ever be said. Who wants to watch 11 polite supervisors asking questions that have already been screened and dissected by a PR team? Democracy demands more, especially in San Francisco.

Give me Chris Daly and Tom Ammiano with free rein to ask the mayor questions once a month and maybe it won’t be democracy in action but it sure as hell will be entertaining. If the session gets a little hot under the collar or things get said that aren’t exactly polite, well, so be it. The Board and the mayor will survive.

I for one am looking forward to a front-row seat with a box of organic popcorn and some melted Earth Balance non-butter. Anyone care to bring the naturally sweetened lemonade? We can take bets on who asks the rudest question.

Tommi Avicolli Mecca is a radical working-class southern Italian queer writer, performer and activist whose works can be read at www.avicollimecca.com.