A Night Market for UN Plaza 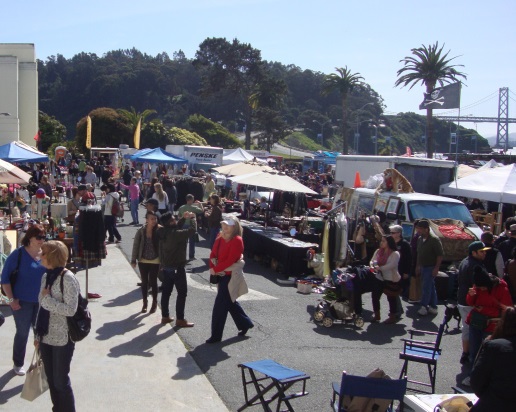 This will soon be the scene in UN Plaza

A new, bold idea is moving forward for long troubled UN Plaza: A Friday Night Market. Initiated by the SF Department of Public Works and the Market Street Association, the planned market has partnered with Ansanelli Productions, which runs the highly successful Treasure Island Flea Market and Jack of All Trades in Oakland’s Jack London Square.

We wrote in March about efforts by SF Beautiful and other groups to improve UN Plaza, a highly visible blight in the heart of the city. I wrote what turned out to be an overly optimistic piece on UN Plaza’s future in October 2010, in which I argued that “of all the under-utilized public spaces in San Francisco, perhaps none is more important to the city’s economic vitality than UN Plaza.”

My enthusiasm was based on the Mayor’s Office of Economic and Workforce Development (MOEWD) adding a Thursday art’s market and Off the Grid food trucks to UN Plaza’s already successful Wednesday Heart of the City Farmers Market. But despite the efforts of MOEWD, SF Beautiful, the Tenderloin Economic Development Project, and other groups since that time, UN Plaza is far from realizing its potential.

The idea behind the Night Market is that something is needed to make UN Plaza a destination for nearby workers and residents. It will be free to the public and will feature food, cocktails, retail, entertainment and children’s activities. The market will run each Friday night, 4:00pm to 9:00pm in the months of September and October.

The Night Market is the brainchild of DPW Director Mohammed Nuru and Carolyn Diamond of the Market Street Association. This is the second major Central City project in which  Nuru has been willing to try innovative strategies where success is certainly not assured. Last month, DPW unveiled its Pit Stop program in the Tenderloin, which addresses the lack of public toilets in the area. It already shows signs of success, though it is too soon to evaluate.

Nuru’s involvement in the Night Market sends a message to vendors that the city is serious about changing UN Plaza. If the market proves successful during its eight week trial period, it could make United Nations Plaza a Friday evening destination throughout the year.

Diamond has long worked to improve Mid-Market, and had many chances to simply give up in the face of  its stagnation. . Yet it was clear during my meeting with her last week that she is as hopeful and  enthusiastic as ever, and still believes that  a positive transformation of UN Plaza can occur.
Challenges to Success

Who will want to spend Friday early evening in UN Plaza? Will workers from City Hall and the State and Federal Buildings stop by for a drink and to check out the market before heading down the escalator to BART or MUNI? Will Trinity Plaza residents across the street check it out? And what about those coming to the Golden Gate, Orpheum, or Warfield Theaters—will they stop by UN Plaza before their Friday night shows?

I really hope some of the 4000 kids living in the nearby Tenderloin  check out the activities. The Tenderloin would likely benefit the most from a revitalized UN Plaza, which has made its continued problems so frustrating to me.

Weather is a challenge. Evenings in UN Plaza can be cold and windy, though the pilot is set to start during the warmest months. It’s normally not the most inviting setting, but it will be transformed into a happening place on Friday nights.

But here’s the biggest challenge: The Night Market must raise an additional $60,000 to fully fund its eight-week run. There doesn’t appear to be a Kickstarter campaign (someone should start one!) but tax-deductible checks can be sent to Carolyn Diamond at the Market Street Association 870 Market Street Suite 456, SF, CA 94102.

I’ll be donating and hope others recognize this special opportunity to do something special for UN Plaza. I’m told the best food trucks, beer and wine vendors, and vendors will all be there, so even those not in the immediate area should come check it out.

The opening Night Market is on September 5. Don’t miss out on the opening, because you can then say thirty years from now that you were there when it started.