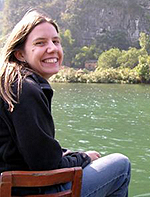 Most people involved in City politics today know Nicole Derse – the 29-year-old activist who has earned a solid reputation in progressive circles as a dedicated grass-roots organizer. But now she’s about to enter a new stage in her career, as she leaves for New Hampshire to work as a political organizer on Barack Obama’s presidential campaign.

“Nicole’s leaving is a huge loss,” said local activist Robert Haaland – who worked with her closely in 2005 against Schwarzenegger’s Special Election.

“I was her first campaign,” boasted Supervisor Ross Mirkarimi, who hired Nicole to be his campaign manager in 2004. “She cut her teeth and did a great job, and I saw she possessed a great talent that would make her a phenomenal campaign organizer. Which doesn’t surprise me why today candidates from the local to the national level would want to hire her.”

Nicole says that she doesn’t remember when she wasn’t a political person – going back to watching the presidential debates as a young girl. But she wasn’t always into working on political campaigns, which came after a long road of passionate advocacy.

Nicole grew up in Slinger, Wisconsin – a conservative working-class town 30 miles from Milwaukee – where her Congressman was Jim Sensenbrenner (“the first politician I ever hated,” she said.) She grew up in a Catholic family of French-German ancestry, and her father moved to Australia when she was ten after her parents divorced.

“Mom had to work two jobs,” she said. “She was a medical assistant who did all of the duties of a nurse, but didn’t get paid nearly as much. And she was a waitress for over 20 years, despite her disabilities. But my parents both instilled in me the idea to create my own destiny – and that it’s up to you to live your life the way you want it to be.”

Nicole credits the fact that she grew up in such a conservative environment as molding her political persona, because she had to learn how to take unpopular positions at an early age. In High School, somebody in her town spray-painted “TRUE WHITES ONLY” on a local basketball court – so she went to the Police. “I threatened to take it to the Milwaukee Journal if they didn’t remove it right away,” she said, which they did.

Despite growing up in a small conservative town, Nicole’s older brother showed her that there was more to life than just Slinger, Wisconsin. “Danny was one of the only people around me who saw the world as a much bigger place,” she said. “He did a lot of traveling around the world when he was in his early twenties, and that was a real inspiration for me to go out in the world myself.”

At the end of High School, Nicole was offered a very generous scholarship to Marquette University – a Jesuit school in Milwaukee. She turned it down, which was a huge scandal in the family. “My grandmother was so upset,” she said, “but I always felt that I needed to step outside my comfort zone. It makes sense to always challenge yourself and to try new experiences.” She went to Macalester College in St. Paul, Minnesota, because it would be a more diverse and tolerant environment.

Nicole majored in Urban Studies at Macalester, where her faculty adviser was Peter Rachleff – a historian with an expertise in labor relations, race and ethnicity in the United States. “All these ideas I had about justice, oppression and political possibilities,” she said. “All of a sudden I had a language for it.”

While in college, Nicole got her first experience in community organizing. The Twin Cities have an impressive number of city-sponsored neighborhood organizing community groups, and Nicole was able to dive right in to get the experience.

“I walked into the Thomas Dale Block Club in St. Paul,” she said, “which was a real model in organizing that truly involved residents. It was there that I learned that when given the opportunity, and when approached with respect, regular people can get involved.” At the Thomas Dale Block Club, Nicole worked on housing and crime prevention issues with residents – and helped launch a Reclaim the Community Event.

Nicole also helped Somali immigrants get job training at the Elliott Park Neighborhood Center, set up a civil rights curriculum at a charter school, and volunteered at a local homeless shelter during all four years. She also spent a semester abroad in Guatemala, where she dated a revolutionary involved in covert operations.

She also worked in the Asylum Law Division at Minnesota Advocates for Human Rights, where she interviewed immigrants from Liberia and Sierra Leone who were seeking asylum in the United States. “It made me realize that I didn’t want to be a lawyer,” she said, “because it wasn’t creative enough for me. I was more interested in how do you create better laws – rather than working under the existing legal structure.”

In 2001, after having graduated from college and traveled for several months, Nicole promised a friend that they would move to the Bay Area. “To be honest,” she said, “I really didn’t want to go. But I finally agreed to try it for a week – and I would only stay longer if I found a job and housing right away.”

By the end of the week, they had a found a place to live in Oakland, and on the last day Nicole found a job at the San Francisco Youth Commission – to work as a Youth Empowerment Coordinator.

Nicole stayed there for three years, in what she called the “greatest job in the world.” Her duties involved organizing young people and getting them excited about politics, learning how the levers of City government function to be an effective advocate, and mentoring Youth Commissioners to become political leaders.

“Nicole was tirelessly optimistic,” said Peter Lauterborn, who frequently writes for Beyond Chron and served on the Youth Commission at the time. “She was incredibly passionate and energetic about all the issues that we worked on together – from police reform to parks to sexual harassment in public schools.”

“There was so much success in getting young people to believe in their power,” said Nicole. “It clarified for me about why I do political work – helping a group of people who are shut out of the system, but when given an avenue can really thrive and take ownership of it.”

Working at the Youth Commission got Nicole to think about campaign politics. “Before then,” she said, “I had never appreciated how much it mattered who was really in power. I learned that if we could get more people like Chris Daly in government, we could get some real policy changes.”

In November 2003, Nicole walked into the Matt Gonzalez for Mayor Campaign Headquarters – where she ran into organizer Richard Marquez. Nicole wanted to help on voter registration, so she asked who was coordinating the campaign’s drive. “You are,” he said.

Without any guidance, Nicole went back to her apartment and organized a voter registration plan for the final weeks of the campaign. With the help of many volunteers, the Gonzalez campaign registered 4,000 people in the next 12 days.

Like many progressive activists, Nicole planned to spend the 2004 campaign fighting to defeat George Bush. But then she started getting phone calls from Ross Mirkarimi, who was running for District 5 Supervisor. She finally took the job as his campaign manager.

Running the Mirkarimi campaign was a big professional challenge, said Nicole. “I was a 26-year-old woman thrown into the complicated dynamics. But with few resources, we were able to engage so many people.” Mirkarimi won the race in a crowded field of 22 candidates.

After the 2004 Election, Nicole traveled with her roommate to China – when the tsunami hit on December 26th. “Seiji and I decided to do everything we could,” she said, and by January 3rd they arrived in Bangkok. Within days, Nicole and Seiji were coordinating all the foreign volunteers at the Tsunami Volunteer Center – where she ended up staying for six weeks.

In the summer of 2005, Nicole got a phone call from Robert Haaland – a labor organizer who had run against Mirkarimi. Schwarzenegger had called for a special election, and labor and community groups were under attack. Haaland asked Nicole to work for the Alliance for a Better California, an umbrella organization to oppose the Governor’s initiatives. She agreed, and by Election Day, they had 1600 volunteers out in the streets.

In 2006, Nicole took a job at Power Pac – a 501(c)(4) that works to help people of color get progressive change, and they sent her to work on campaigns throughout Southern California. But in October, San Francisco progressives panicked at the prospect of Supervisor Chris Daly losing re-election – and Nicole came home to jump right back into the fray.

Today, Nicole is leaving San Francisco for New Hampshire, where she will work on Barack Obama’s Presidential campaign. “I’ve never been in an experience where I’ve been compelled by national politics,” she said. “Obama has the ability to actually inspire people to believe that they have a voice.”

Nicole believes that this experience will help her achieve her long-term plans – starting an Organizing Institute for progressives to tap into grass-roots coordinators who have the skills to run an electoral campaign. “I want to expand who’s involved in politics,” she said. “I want to get more people who are community-based to do this work. I want to break the disconnect between high-paid consultants who can’t organize and campaign volunteers who lack the resources or training.”

In New Hampshire, Nicole will be a Political Organizer for the Obama campaign, where she will organize 2-3 constituencies – probably youth and labor. “I want to meld the art and the science of political campaigns,” she said. “I’m going to New Hampshire to learn from people who have more experience and skills.”

Political activists, civic leaders and personal friends are invited to attend Nicole’s Farewell Party on Thursday, March 15th at the Space Gallery (located at 1141 Polk St. – between Post and Sutter), starting at 8:00 p.m. We all hope she’ll be back soon.