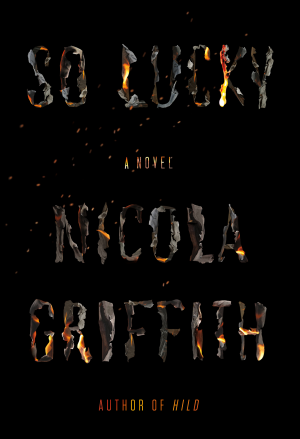 Saying Mara Tagarelli has Multiple Sclerosis, relapsing-remitting multiple sclerosis (RRMS) to be specific, does not define her as a person though way too much of the world acts otherwise.  Nicola Griffith’s new novel So Lucky may be about Mara’s emotional struggle with living with MS.  But unless the reader is ready to have Mara “accidentally” hit their legs with her cane, they will not call Griffith’s tale uplifting fare ready for a Hallmark Channel adaptation.  In the pages of Griffith’s slim novel, there occurs daily micro-humiliation, Big Pharma exploitation, intensely painful drug side effects, and the helpless fear of death.

So is Griffith being ironic in calling her novel So Lucky?  Before the MS comes, Mara’s been married to the Tarot-card reading Rose for fourteen years.  Her job as executive director of the multi-million dollar Georgia AIDS Partnership is hectic but satisfying.  She’s an accomplished martial artist. But when the story truly begins, Griffith’s protagonist will lose all of that in the space of a week.

RRMS, the particular type of MS Mara is diagnosed with, does not automatically reduce her to wheelchair confinement.  She can still see and hear well. On the other hand, what won’t work so well from now on are her speech, balance, and coordination.  For someone whose base response to frustration is to hit something, Mara’s losing that particular way to respond means stewing in her anger and stress.

The neurologist tells Mara that stress exacerbates her RRMS.  But as the reader follows Mara (the story is told in first person), there’s much that befalls her that would cause even Gandhi to grab up an assault rifle and fire away into a crowd.

Fearing that she’ll be permanently considered by others as just a MS victim or sufferer haunts Mara’s social interactions.  A workout session with Bonnie, Mara’s dojo sparring partner, becomes the first of many silently humiliating moments of dismissal by others.  Of greater concern to Mara is whether having RRMS will terminate her newly changed relationship with best friend Aiyana. Aiyana’s doing post-doctoral research in New Zealand for at least a year while Mara’s trapped in Atlanta does nothing to ease the latter’s anxiety.

Current options for MS cures and treatments also feed Mara’s fear and anger.  Traditional medical treatments seem more like exercises in palliative guesswork than actual cures.  The only certainties offered by traditional medicine are: the agonies of such drug side-effects as hour-long lightning-like pain flashes in the limbs, expensive treatments starting at $5,000 a month on the low end, and slick advertising that preys on MS-diagnosed patients’ desire to be whole again.    Alternative medicine isn’t much better. Suggested treatments include getting repeatedly stung by bees or having the jugular vein scraped out and stented.

But Mara’s greatest source of stressful anxiety comes from her being bombarded directly and indirectly with messages of her helplessness and lack of control over her life.   Her neurologist is just the first of many people to treat Mara as a non-person lacking individual desires. More dangerously, what feels like a spectral threat of death that only Mara can see might be more than something imagined.

An angry Twitter #CripRage thread helps Mara begin to fight back.  Re-claiming the derogatory term “crips” as a mark of pride, she proceeds to verbally chew the legs off those who profit from, sentimentalize, or even ignore crips’ needs.  Some magnificently acerbic tweets from Mara’s thread include:

“…I’m not a sweet crip here to inspire you.  I’m not here to be liked. I won’t disguise my impairment to make you think I’m just like you…

“But an impairment is not something to be ashamed of.  MS is not a moral blight, it’s a disease…

“We have holes in our spines and holes in our brains but we’re still whole human beings, full citizens of our society…

Mara’s version of action is creating an ACT-UP-like community for crips.  Perhaps it’s not coincidence that the initials of the name she chooses, Cripples Action Team, is an anagram of ACT.  Drawing on her experience and contacts in non-profit work, Mara manages with incredible speed to get CAT involved in political lobbying and providing pets to members who need them.  This portion of Griffith’s book entertainingly de-mystifies in broad strokes the steps it takes to create a grassroots organization that’s fueled by more than idealism and good intentions.  Readers who are thus inspired to form their own grassroots social change organization will probably bring a smile to Griffith’s face.

Despite the exhilaration of CAT’s growing pains, So Lucky definitely isn’t an inspirational sweet crip story.   Mara has good reasons to continue being angry at a world which treats crips as second-class citizens.  Ironically, her fury doesn’t make her different from those with MS who’ve become dependent on the kindness of strangers.  Both Mara and the generally defeated people she meets at an American Multiple Sclerosis Society peer group generally turn out to be equally bad at facing the emotional challenge of living with MS.

Rose saw Mara’s particular species of anger before when the latter first started taking up karate and self-defense.  But as mentioned above, Mara no longer has the benefit of a regular physical outlet for her frustrations. Getting past her anger at developing the disease means Mara must face her fear of physical helplessness.  But acknowledging that fear does not mean accepting it as shaping her behavior.

That point is where So Lucky diverges from the forgettable sweet crip story.  In those lesser “uplifting” stories, the crip character learns to stop being angry at the disease or accident that crippled them and to graciously accept the kindness of strangers.  Griffith’s tale is a verbal switchblade which justifiably slashes such gauzy sentimental stories to ribbons.

Subscribing to sweet crip sentiment means accepting ableism.  The term may sound like an abstract or imaginary grievance to the blinkered.  Mara’s ordeals show precisely what the word means. Because Mara is identified as disabled, she becomes a non-person to the able-bodied.  It’s automatically assumed at an airport that she needs a wheelchair to get around. At an academic conference, even though Mara’s identified as a keynote speaker, her disability makes her someone not worth networking with.  The accumulated social isolation from being seen as weak or less than human by the able-bodied slowly takes its emotional toll on Mara. But it’s ableism getting expressed in very violent ways towards Mara’s fellow crips in CAT that truly pushes her to the edge.

It’s noted in So Lucky (and repeated in Griffith’s Aud Torvingen novel Always) that there’s always someone faster, stronger, and/or smarter than you.  Ableism takes that truism and uses it as a rationale to justify treating the less able-bodied as weak, less than human, someone whose opinions or feelings aren’t worthy of notice.   It could be a receptionist who no longer greets Mara by name or a physical therapist unconcerned that his humorous anecdote makes Mara feel vulnerable.

Ableism is the Story Of Less.  But Griffith hints that it’s only one genre in that story.  Other -isms such as racism or sexism offer their own variants on the Story Of Less.  Take a look at Fox News or other right-wing media outlets to see that story being widely told openly or subtly.  Yet a pronounced imbalance of power between at least two people in a social setting is all that’s needed for the Story Of Less to be re-told or re-enacted.  A male home security system salesman tries to exploit Mara’s weakness to intimidate her into buying a far more expensive system than she actually needs.

Is there an alternative to the social and economic inequality supported by ableism?  Economic philosopher Amartya Sen would argue based on his book Inequality Re-examined that diminished physical ability shouldn’t bar a person from reaching their potential.  The measure of that potential, though, should be proportionately based on what’s within that person’s power given their physical condition.   Mara would probably agree with that assessment.

To call So Lucky a political book and an absorbing psychological tale will scare away those who are uncomfortable with the anger with ableism that Griffith captures here.  But this is anger that needs to be shouted on TV screens and over social media until enough able-bodied people actually listen, recognize crips as people, and take action to help crips live as full a life as they can.

(“So Lucky” is now available in bookstores.)