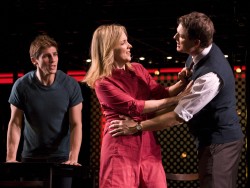 THIS A+ PSYCHOLOGICAL MUSICAL DRAMA has you on the edge of your seat as you reach for another tissue to dap your eyes. This unusual musical has a big heart and is one of the most entertaining this year. It’s a complex story. Diana, the beautiful mother of a typical American family has a bipolar disorder. Mental illness for a Broadway musical seems an odd choice – but it does let us in on how serious bipolar is, and how it can destroy a family.

The music and lyrics in the show tells the story. The powerful words make you think of people you know, or may have known who have lost touch with reality. They fade away right before your eyes, and there is nothing that you can do about it.

In the play Diana’s husband takes a chance and convinces his wife to undertake shock therapy on her brain. Diana reluctantly agrees. The results are not pretty. There seems to me that the play shows us what kook doctors can do to your health. All they think about is pills and shock therapy. And does it work? No! Maybe the Pill pushing Docs are on drugs. But the singing about the wonders of the drugs enchants the innocent.

Jeremy Kushnier plays Doctor Madden and Doctor Fine – Powerful performance! Alice Ripley (Tony Award Winner) is Diana – this musical could not work without her in this soul-stirring drama. Ripley is incredible! Asa Somers is Dan the frustrated husband to Diana. Emotionally rousing! Emma Hunton plays Natalie the daughter – who turns to drugs because she has little communication with her mother. – Great performance! Curt Hansen plays the Son (Gabe). His whirlwind performance takes your breath away. He is totally incredible! Preston K. Sadleir plays Henry (boyfriend of Natalie). He tries to keep Natalie off drugs. Engaging and First Rate!

I urge you to see this thrilling, engaging musical at the Curran. “The best acting ensemble in ages. They burn the boards!”

O.K. I’ve established already that Veronica Klaus is fantastic. And yes Veronica is an unpredictable grab bag of tender songs and ironic ‘Love Lost’ songs. In one part of the act she pulls out a little voodoo type doll just before she starts to sing about one on those men who got away. To really give us a little more realism, she sticks hatpins through the boy doll. So, you see – she gets under your skin n more ways than one. I loved it!

When she first started out the music set for the evening, she was a little nervous and on the first song she sounded like a cross-between Peggy Lee and Butch Cassidy. But, then in a twirl – she got her footing after admitting that she was a little nervous. Veronica was now in control. She gave us a rich “Baubles, Bangles and Beads” from Kismet from ‘Finnian’s Rainbow. The room was practically on fire, with all the enthusiasm.

Then, after she removed a classy veil, she showed us her new hairdo. “I now have two Chignon’s instead of two. They were gorgeous you do know what a chignon is – don’t you? I should also point out that she had a million dollar diamond broach that kept her dress from falling off. Veronica takes us on many exciting musical trips, and ‘Traveling’ Light’ (James Mundy and Johnny Mercer) is a song that came out surprisingly good – considering it was a little bit country. Klaus give it a different gloss. She gave it a silvery, moody and bluesy presence.

Here is a heart breaker – a Nancy Wilson song. Klaus carries the torch for Nancy with “Face It Girl, It’s Over.” Wow, that was powerful. I’ll bet she sang that to the guy who looked like the little doll many times over. Ooops, there goes another pin in the dolls stomach.

Remember the ‘Turtles?” Well then you remember “Happy Together.” And then she slid into the arresting “Love is a Losing game” – and I can attest to that. Rodgers and Hart could have wrote: “I Didn’t Know what time It Was” for Veronica. How’s that? Just look at these lyrics: “I didn’t know what time it was. Once I was young. I had a thrill or two.” How many of you guess that Klaus has had more than a thrill or two?

From “Cabin in the Sky” Veronica really revealed a new layer of gloss on “Taking a Chance On Love.” That’s risky, you know – taking a chance — but then, she has those pins.

This will tickle your somewhere. I won’t say where – you know what I mean. Veronica is downright ‘lusty’ with “Illusions’. Here is a sample “Illusions – slightly used. I’ll trade them all for a penny. Want some Illusions – their second hand.” O.K. – That did it. I’m hooked on Veronica Klaus. Go ahead – put a pin in me.

Oh – and Veronica Klaus has a question. “What is it about those Kardasians?” – “for the life of me, I don’t know what that’s all about.”

This show glitters. It’s “Fireworks!” The audience gave her three standing encore’s. And, here’s more good news – she has been booked for another show in the near future. I’ll see it twice – it’s that good! http://www.therrazzroom.com/

FOR ONE NIGHT ONLY AT THE BERKELEY RODA THEATRE — PLAYGROUND in collaboration with TheatreWorks’ New Works initiative, along with composers Christopher Winslow and Richard “Scrumbly” Koldewyn” put together a delightful evening of short (10 minute musicals).

They asked us to vote on the best, and here is my pick for #1. “Boy Meets Dog”” by tom Swift with music by Scrumbly Koldewyn. Directed by Jim Kleinmann. A man gets a dog from the pound. At first he is hesitant about keeping the dog. The Dog (Robert Brewer) begs the man not to take him back to the pound. He wags his tale (human tail) and looks longingly at the man, who soon gives in and hugs the dog and tells him that he loves him.

The Dog wags his tale again and jumps up on the man. The man says – “Oh, this is going to be great. I love you. There is only one thing that you need to know. They are going to cut off your Balls!” The dog looks forlorn. It is wickedly funny! Jackson Davis and Robert Brewer were just fantastic. I hope it becomes an extended musical. All in all – it was a very fun evening. There were many good play ideas that could easily become a full-fledged play. Everyone in the show is a master at his or her game.

JUDY BUTTERFIELD “UNDER THE MANHATTAN MOON”

Butterfield is a mystery. In her show at the Rrazz Room it was more of homage to New York than it was to San Francisco. And why not? She won some Cabaret awards for her appearances in N.Y. – so, I guess in her mind she should thank them.

Some of the songs that Butterfield sings are very classy and jazzy. She’s a milder and gentle singer. That can be good, but on the other hand – it can be boring. Most of her set was sleepy.

I grew up with Cole Porter, Irving Berlin, Gershwin, Sammy Cahn and Oscar Levant music. Oh – what wonderful songs they brought to the world. But what I heard from Butterfield was low-energy music from this great music. “Teach Me Tonight,” (Sammy Chan/Gene DePaul) wrote this stunning and memorable song. Butterfield – lost the import of the music. It should break your heart – but not tear up the sheet music. Not even the simple “Tennessee Waltz” (Redd Stewart and Pee Wee King) prompted me to get up and dance.

Her “On The Street Where You Live” – (Alan Jay Lerner and Frederick Lowe) gave a clean, punchy, solid arrangement from the “Big Band Era”. Liked it! Butterfield came out a winner with “That Old Black Magic” – (Harold Arlen and Lyricist Johnny Mercer). The 1942 hit has been giving magic ever since. And this time, add Butterfield to the list of fine renditions.

The Gershwin “Do It Again” was sly and ‘wink’, ‘wink’. But, the pace dragged a little. She pleads “Blame it on My Youth” another wonder song, that did not have the heartbreak in it that it needs. Butterfield’s show was pleasant enough. She has a very dramatic stance – but her versions of most of the great American Song Book pales in comparison to others.

The arrangements were pretty good. Here is Butterfield’s backup: Director, Clifford Bell – Musical Direction by Ken Muir with Muir also on the piano.

The song set was a good one. I just wish that Butterfield would break out of the monotony once in a while. It was almost like attending a wake. I know that she worked hard – but she has to playback the show and listen carefully to it.