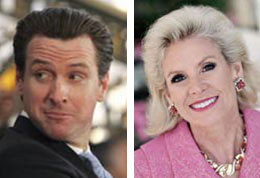 Mayor Gavin Newsom is teaming up with a top Republican fundraiser to fight, and is asking for checks between $1,000 and $25,000 to do so. But this battle won’t be over affordable housing, marriage equality, violence prevention, faltering schools, labor standards enforcement, AIDS research, fixing Muni, or funding parks. It won’t even be about Wi-Fi, the small business assistance center, horse stables, foot patrols, or anything else. Newsom has finally picked politics over policy: the fundraiser is to simply oppose Question Time at the Board of Supervisors.

This is not about being anti-Newsom—the Mayor’s supporters should be equally frustrated that he is not expending political capital on issues they believe in. Similarly, this is not about supporting Proposition E, which would require the Mayor—all mayors—to interact publicly with the Board of Supervisors at least once a month.

The fundraiser is hosted by Dede Wilsey, a wealthy San Francisco socialite who has contributed thousands of dollars to Republican candidates. She gave $2,000 to George Bush’s re-election in 2004, $25,000 to Schwarzenegger’s special election campaigns in 2005, $22,000 to Arnold’s re-election in 2006, and in the past two years has made an annual donation of $15,000 to the Republican National Committee. This year, she gave $2,300 each to presidential candidates Mitt Romney and John McCain.

Prop E does not need to be such an excruciating issue. While Question Time could become “political theater,” as Newsom likes to say, the Mayor is forgetting that he too would be an actor. With all of his speaking ability, charisma, and policy knowledge, Question Time should not be such an obstacle.

Despite being known as a young star in the Democratic Party, Newsom has considerable history with the local Republican Party. In his 2000 run for Supervisor, Newsom gave $500 to appear on a slate card backed by the GOP which was also encouraging voters to support George W. Bush for President. Newsom has also counted Republicans Donald Fisher (Gap founder) and John Bowes, CEO of toy company and sweatshop operator Kransco.

While Newsom is free to affiliate himself with whatever conservative figures he wishes, it is worrisome that his focus is no longer on policy. He is not raising money to fight for anything—the fight is to keep him out of the public eye.

Progressives would happily engage in any policy debate with the Mayor, and Newsom’s supporters should demand a policy-oriented politics. While some might argue that Supervisor Chris Daly started this by placing the matter on the ballot, that in turn was a response to Newsom’s choice to ignore the will of 56 percent of November 2006 voters.

Ignoring the public’s will and siding with Republicans for personal political benefit is simply not a San Francisco value.