New York Times Style Section to Women: Get Naked or Dress Up (with Makeup) 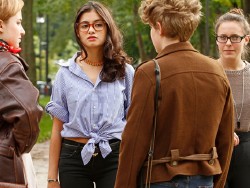 If it were a quiz show, you’d be forgiven for not figuring out which articles were concocted as anti-feminist spoofs and which one was actually printed in the October 13, 2011 New York Times Thursday Styles Section. Was it an article titled “The Campus as Runway” about a so-called trend among college women who are proudly “trying to define ourselves by the way we look?” Was it one with a headline “Up the Career Ladder, Lipstick in Hand” urging (modest) make-up as a career enhancer for women? Or was it a column letting us know that “Running Skirts Go Girly” quoting a 40 year old runner saying “As serious as I am, it’s fun to still be a girl.”

If you think these stories were from an Onion parody, think again. Each was actually an article in last Thursday’s New York Times.

Shockingly, there is even a fourth anti-feminist jaw-dropper to add to the list: a piece with the title “Taking Sides Over a Book on Women.” Is the book about controversial women politicians, artists or athletes? No. The book, “Culo by Mazzucco,” features “artistic photographs that present its models stark naked and bottom-first.” Yes, a book about women’s butts, featuring, as the article said “the rumps of Paris Hilton, Pamela Anderson and Sarah McLachlan.”

The fact that these stories all appeared in the same 12 page section of the New York Times adds to the sense that its editor has a definite problem taking women seriously. (All the articles were written by women, but the editor of the section is a man – Stuart Emmrich.) But even taken individually these articles made me wonder: Is it a coincidence that each of these piece presents women as object? Something to adorn (or not)?

What if we apply the age-old test to determine if the articles are in fact sexist: can we substitute men for women and imagine the articles? A book about men’s rear ends? An article on Ivy League men who define themselves by what they wear? Men who wear a certain style of athletic wear because it makes them feel like boys again? Make-up as giving men a leg-up on the career ladder?

There are other problems with the articles. The one about collegiate fashion? In an era of crushing student loans and unaffordable tuition hikes the piece starts with a Columbia student “darting to her classes” in a Marc by Marc Jacobs daisy-patterned dress. I couldn’t find that one on-line, but the “running impala print” version sells for $528.00. The Times’ co-ed (a term the paper uses) was “darting” (do men dart?) to class in Chloe boots – footwear that retails for $975.00.

Has the New York Times written about students across the country who are being forced to reduce (or eliminate) clothing budgets to pay for exorbitant text books and rising tuition? I am not aware of it, but would not anticipate reading about that fashion trend in the Style section.

And the story that make-up enhances perceptions of a woman’s likability, competence and trustworthiness? The Times admits in the third paragraph that the study was paid for by Proctor & Gamble, makers of CoverGirl and Dolce & Gabanna make-up. Yet the writer dismisses the obvious implication because the study was designed and executed by a Harvard professor and others. I wonder what the Times’ advertising revenue is from make-up products and the companies that sell them.

The piece on the book about women’s rear ends? It’s hard to know where to start. Maybe with the fact that there are five photographs accompanying the story – almost all of men gathered to look at the photos. Or how about the convivial quotes (all from men) about whether the book is just good ‘ole “fun.” The piece ends with a quote from a (male) restaurant owner who put an image from the book “four naked women in a bed, legs entangled” on the menu of his club. “Did that photo really make his customers what to eat?” the Times asked. “Oh yeah” the guy answered, “So much.”

This is news that’s fit to print? I’d say no, not even in a Style Section.